Some suggestions that occurred to me recently, in no particular order, that seemed worth posting:

One option would be to convert 'em into cubits. Another option, if converting to cubits seems like too great a benefit, would be to add full respecs / cleanse points that can be bought with the spare skill points to the cubit store. Or perhaps simply change the level coffers so that they stop giving skill points and give extra cubits / cleanse points after the player has the 300 points needed to fill all skill pages, assuming that 3 skill pages will be the maximum and that there are no future plans of allowing more than 100 points per page.

Either a checkbox in the inventory panel, or a setting in the settings menu, to filter the automatic smart stacking to forbid mixing of different stone/wood types, and a separate one to forbid mixing different colors. Preferably (if possible) this should also stop the stacking from occurring when shift-clicking items to/from storage and machinery.

Since I’ve been told that the main way of doing this would turn it into a mesh, which is apparently undesirable, then three new versions of glass blocks could be added: one with no borders whatsoever, one with a single border, and another with two borders for corners. Then it would just be a matter of placing the desired borders in the correct orientation for whatever border effect the player is going for.

Of course, since there’s no way to select recipes in the furnace, a recipe could be added to the basic crafting table that converts glass from one border type to another. Maybe requiring a high level of decoration crafting to unlock.

Another possibility that could be used either as an alternative to the conversion recipes, or instead of the recipes, would be to have the block changer effect on chisels switch between border types.

This would simplify the returning of loaned plots when the person that borrowed 'em no longer needs them, as well as facilitating the reclaiming of areas plotted as a way to reserve for future expansion around cities by guild members that are not playing anymore, instead of the guild having to wait until the beacon expires from lack of fuel.

Pretty sure they said that it needs the wire frame in order to be clear and not a mesh. But I could be mistaken. I really don’t want to dig thru all the discussions there has been about glass because it is a lot and they have weighed in on a few of them letting us know why it’s the way it is.

Yes please! A checkbox in the inventory or something. Would make my ocd happy so I don’t have to manage them manually that hard.

All very good points. It seems like sorting gets suggested pretty frequently and I’ve put one in myself. I honestly don’t get the whole glass debate, there’s a reasonable way to do it, like using lighting effects and giving it a slight tint. Honestly, tinted glass could be a wonderful addition and wouldn’t require any weird borders. Pure polished glass is invisible under certain circumstances anyway. Give it some reflection and it’s good.

RE: seamless glass: I did a relatively indepth post about the trouble with glass about, ooh, two years ago now, and the situation has not really changed since then:

This thread is my jam! And by jam, I mean a huge bugbear I’ve wanted to improve forever. And I’ve just gotten back from a wonderfully relaxing Christmas holiday at my parents house so I’m going to chat a bit. I’m not actually back in the office til next week though. This was my ideal design for the glass block! Like you, I’m not super happy with the aesthetic of the current glass block, but it looks the way it does for some pretty important tech reasons. The biggest and baddest reason of them…

TL;DR: We don’t support semi-transparent block textures, which makes nice glass very difficult to do. I am not inclined to make a ‘seamless glass’ block that is completely transparent but still solid because that seems like great fun for griefers and not much use for anyone else.

Making glass panes as meshes that you could combine in the same way that signs work is likely the best solution for this issue, and window meshes are definitely down on the list of things we’d like to do, but it’s not currently in development.

@jesshyland Thanks for posting that. Saved me from trying to find that

Interesting. When I searched there were just too many results to reasonably browse thru and see what had already been discussed.

Then it wouldn’t be possible to have a glass full block that is on all sides like the… center part of the gleam signs for example? A slight tint and reflection (refraction?) like on those (perhaps determined by the sand color used) was what I was thinking of, so that it wouldn’t be entirely invisible.

Panes would be wonderful, too, of course, and a welcome addition, so I’m glad those are at least under consideration 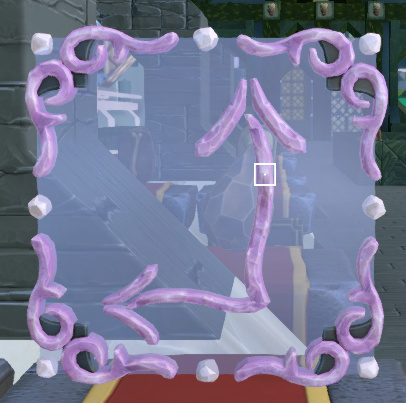 I see. Thanks for the clarification

It’s okay, I totally get why people keep asking for it!

It’s absolutely something I’d like to do, we just need to make time in the overall schedule to do it.

I was out sightseeing the other day, (running into everyone’s beacons to trigger footfall) and I had noticed a few people actually used those signs as windows! And they’re already bordered! So there wasn’t a need to bust out the chop saw and make all of those weird 45s on the trim. It was quite ingenious actually!

Yes, I’ve both seen and used both those and the gleam doors as windows before, but for larger projects it can be tricky, particularly if you’re getting close to the chunk mesh limit, which I believe those all count against, so you can’t use too many of them. Some of my base is already at the limit because I’m a bit of a hoarder and have so many storage blocks that I can’t add any more. Or signs.

One shop I visited the other day had those signs covering their storage, it looked very lovely.

Excellent point about mesh limit. I hoarde, but my building is mostly minimal so I’ve never ran into that problem…yet.

Or is it because their is nothing there to wright over.

but without the frame to tell you something is there, the glass block would just be completely invisible. And the frame needs to be relatively hefty so it doesn’t just get mipmapped out of existence at a distance.

Yea just seems like they have strict limitations with the system they have built in the game now. Give it a year and maybe they can figure something out.


So are you saying it can be done just will take some time to build in the support.

Or are you saying it will destroy FPS for everyone.

Wouldn’t rendering the semitransparent blocks in a different pass on top of the opaque blocks, with a slightly modified block shader that has rudimentary alpha blending be sufficient? Or does this break something in the rendering pipeline? I’ve done some by just rendering the things normally to a temp buffer, add alpha and mix with the actual buffer. Proper reflections etc aren’t possible but for tinted glass it might work since at least I would be fine if glass was missing specularity.

edit: I fully expect the engineers have already tried this approach, what I’m interested in is why it doesn’t work since it has been a good technique in my own amateur stuff. And it’s never as simple as “just do this”, there’s always a million little things that come in your way.

Probably doesn’t need a fix any time soon, and it can actually be used for some out-of-this-world effects in builds 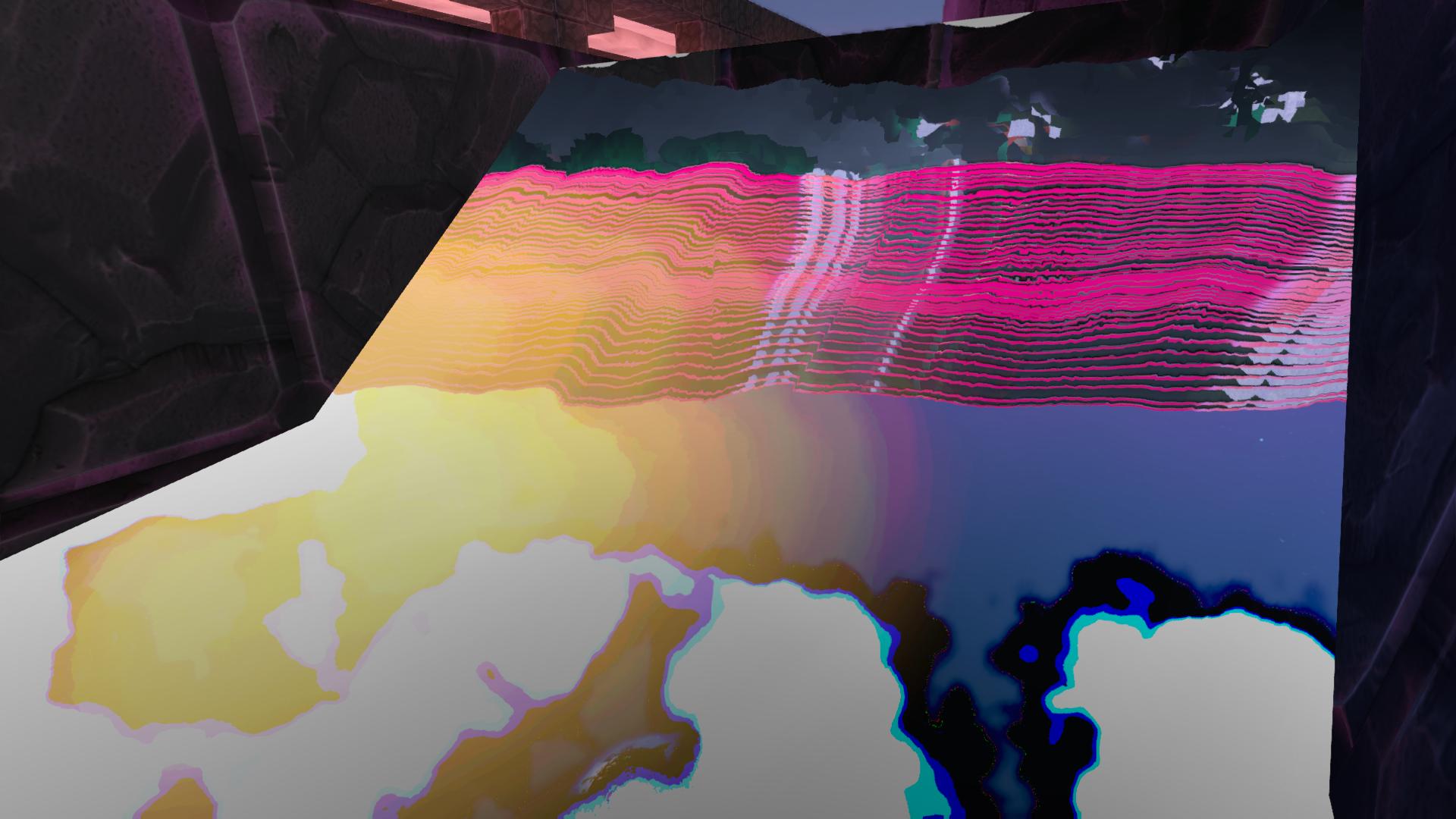 Any PS4 players stumbled on the same effect or is this just pc? Or my drivers?