Right like you wouldnt use gem hammers to mine a lvl 2 world. But thats just you using the right tool for lower level content. I’m talking about player progression. A copper hammer would never be better on a lvl 3 planet (example) because we have iron. Right now… with midgame progression… not FARMING… there is no even player progression to go from iron to titanium tools because silver and gold don’t really fill that enough to justify not using iron. On a level 3 planet for example iron is absolutely the clear winner to use after copper as you progress from planets 1 to 6.

So I did a round on Bes for some shim orbs and found maybe 40 while hitting 12 zones (give or take, stopped to get gleam) and that was enough for me to make about 40 titanium hammers which is pretty damn good. But thats just 1 person cleaning out a quarter or less of a planet and this can be done every 4 hours. So ya it ended up working out for me but I can imagine it’s a pain when you run around for an hour right after someone just picked it clean. I suppose with the epic gathering perk I would have netted more but meh. Figure I try to lighten up the mood

. It would be cool to see how many players actually play at peak times. Is the game on steam? Anyone have rough numbers?
I also realize how hard this is for the devs because it’s not like Conan Exiles or other games where you gather… as in Conan they only have to balance the spawn rates for those people in the server (mostly because people pick a server and play, they dont move) , where in Boundless the whole population visits the one world.

I can’t remember how many orbs i’d get before patch using fists, but today after going on my hunter (gathering epic used) i hit 8 glow caps as I was hunting and every single one gave no orb. Is this a bug or normal? It felt abnormal to me

Find big growth field on Delta Cancret, gather it so much as possible, carry to any Placid World and work it into Orbs by place&dig strategy

This isn’t supposed to work anymore

And??? Thank you for pointing out the obvious but the information is still valid for players reading this for the first time.

u wanna go through the whole forum updating all through the patches outdated information? good start there

That a hell of alot better then my 50-60ish in an hour running from hotspot to hotspot on my atlas. Now that i got max luck I just might try that method.

Any T5/6 planet can drop it from mushrooms or growth. But you can’t just walk outside the hub on Besvrona and pick up 1000+ in 10 minutes so it’s obviously broken

Tier 4 and up AFAIK.

Flan seems to have plenty of Glow Cap Mushrooms. I was lucky and my warp augment was right near a good mushroom field, so I’ve reserved about 80 plots in the sky over it. Plenty nearby to reserve later too when I have more play time. The planet % rate looks good compared to e.g. Besev too: 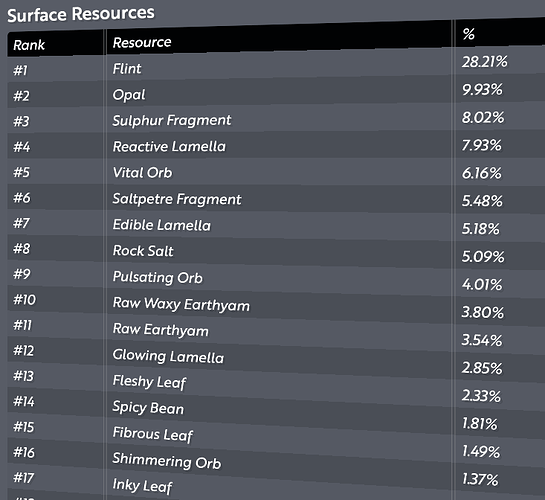 Time for a nice mushroom flan!

my warp augment was right near a good mushroom field, so I’ve reserved about 80 plots in the sky over it

Hehe, this was silly. Not that it matters, I’ll keep the plots there but there are Glow Caps EVERYWHERE.

I actually go to Shedu Tier to farm shimmering orbs. With a decent forged titanium shovel and world regen bombs, I can farm 80 in 10 minutes (the length of a strength brew). It’s much easier than hunting down mushrooms. There are lots of places with growth everywhere, but with regen bombs you only need a little to just farm over and over. I usually farm for 2 brews duration and come away with 180-190 every time.