This guide features a collection of builds to enable playing pretty much all of the content with maximum efficiency. Not all builds are mine so credit is given where credit is due. If you have any comments or improvement suggestions, you are welcome to share them. Also if you’d like to suggest a build to add into the list please reply in the thread.

Getting the skills right not only difficult but also heavy on your wallet. If you want to do everything alone on a single character you will have to make a lot of sacrifices. The best way is to play with a group where everyone specializes in a single task but this can also be achieved with buying extra character slots. This will allow you to eventually play pretty much all of the content solo without wasting any points.

Why not skill pages?

Now you may wonder why you would buy extra character slots instead of just buying extra skill pages. Well there’s a good reason for that. While additional skill pages could possibly achieve the same thing, you will need twice as many skill points on a single character since all skill pages use the same pool of points simultaneously. This is more of a late game progression to allow you to dump your extra skill points you gain after reaching lvl 50.

This build focuses on maximizing building efficiency by maxing power, control and dexterity. Also this build gives decent damage to help demolishing your builds a bit faster in case you’re trying out new designs. All atmospheric resistances are maxed in order to be able build on all planets and with shadow effect and a bit of vitality + health epic and some resistances to help against some mobs that might aggro you if you happen to get too close. It should be enough to survive on all planets. Durability and energy epics for less tool wear and faster stamina regen to reduce down time on building. Max portal distance and portal epic for opening even the longest distance portals.

Note that I only put 3 points in all stats since maxing it makes block placement so fast that you can accidentally place 2 blocks when trying to place just 1. I found this combination to give the most speed block placement speed without getting too fast.

Alternatively, if you don’t need to chisel or open portals that often, you could get by with a simple utility extra page.
Utility/Chisel extra page by @Jiivita (original video)

For gatherer we’re using a stealth focused build to avoid spending points in survivability. Although not built specifically for exploring, it works really well for that purpose as well due to high stealth and mobility.

Similar to previous but doesn’t use shadow effect epic because mostly works underground.

Hunting definitely needs its own dedicated build. There are quite many paths to take in this role. You wanna use slingbows, bombs or fist weapons? Do you want to be a DPS, tank or a healer? Do you prefer rage or focus? Charging or rapid fire? Maximize reviving? Plenty of options to choose from enough for a whole thread of its own.

All these tasks can be nicely combined under one build. However since crafting epics lock you out of some other options or make crafting certain items less efficiently, it is recommended to compensate that with another skill page with the missing skills. Without augment crafting and leaving machine crafting to 2 points, it takes only 84 points (42 lvls) to reach the target and the rest can be spent on the second skill page to complement the missing specs.

So with this maximized setup you need either one character with 3 skill pages and 123 skill points or 3 characters of levels 43, 13 and 6. It is highly recommended to buy skill pages so you don’t have to hop between characters and any thing you can’t get with a generalist build could be bought from a shop.

You can mix and match these builds to find the best combination that suits you while keeping this efficient build as the ultimate target.

*(original video for the above)

Maxing out skills takes many hours of gameplay but making multiple characters is the fastest and most efficient way to do it. By splitting each character for clear tasks, not only does it make it more efficient but also reduces switching when each character is optimized for a single task. I hope this helps you guys and again if you have any suggestions, don’t hesitate to reply this thread.

I think that’s a new record for @mentions for me

I tried to make a pure builder build like you would have on an alt:

There’s not enough points to get everything a builder would want on the skill tree, so there’s always gonna be around 10 points of flex. For example if you know you won’t need to go to certain t6 planets you can get damage epic again to 1-shot on the t6’s you do go to

I left 2 points out of all attributes on purpose since that makes placing single blocks harder when block placement is so fast. I experimented on it and found that 8dex + 3all was a nice balance there. Yeah, true you need only 4 of atmosphere resistances at the moment but this is for a future proof build. Grapples are surely needed but I personally can get by with a standard titanium grapple. True, adding damage can also help against those pesky mobs as well as help demolishing. Double jump might surely be useful. All in all a pretty nice build you have there.

Ah that’s interesting that the speed gets too fast! I think 5 attribute bonus is the best deal in the game so I take it on every character. Maybe then I would do a 7 dex + 5 attribute build and slow down the placement speed and also save a point! Now where to spend it…

The reason why I chose 8 + 3 instead of 7 + 5 is because 7 + 5 is basically the same as maxing dex since dex gives 10 points and all points give you 2 per skillpoint. Sure, the all stats gives other stats as well but the most useful stat for building is block placement speed (unless you go too fast).

Interesting … seeing I have made alts for Coock / Brewing / Gathering / Mining I will have to check their specs against what has been suggested here, since I had no idea where to put my points

My gatherer is a miner, lumberjack, and diggyboi as well as a plant whisperer. I also have a crafter, a forger, and a hunter.

I mainly play 3 of these characters in a day, alternating between hunting or gathering depending on the needs of the day. Currently on break though

I’d like to see how your miner/gatherer build works. I imagine you can’t achieve perfect efficiency by speccing on both

@toxip I just respect hammer to shovel and ax if I need to use either. I never find the need to pickup a plant so I don’t use gatherer epic because I still get plenty of rare plant drops. I have about 6k energy and can mine for several minutes straight.

Dont even have stealth epic as im not looking to engage enemies at all and can run away from most pretty easy using max control and agility, just don’t run straight by them.

a well forged tools and proper brews fills in anything I feel shorted on. 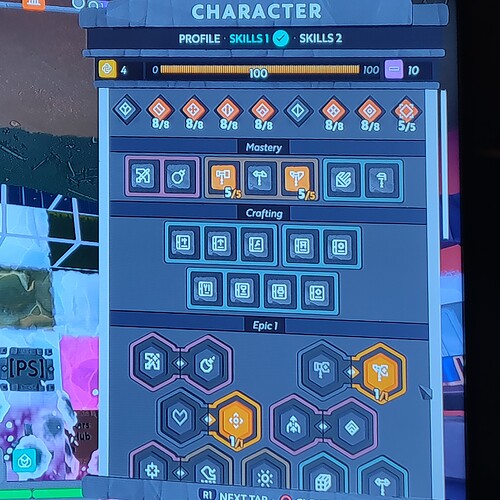 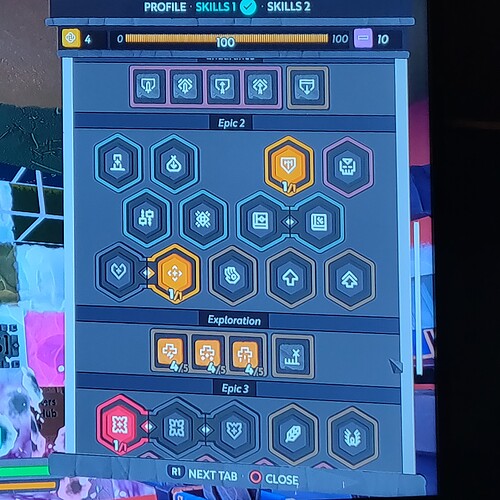 Hmm, interesting, I guess that works alright if you don’t need to do shoveling. I would probably still use different builds in order to get the shoveling mastery maxed and gathering epic. I tend to decorate a lot and gathering those boulders and stuff would come in handy for me. But yeah pretty nice build I’d say.

I think I’m starting to lean more towards this build. I don’t think you need that much survivability since probably the stealth spec would suffice. Might get harder to build on a T6 planet though without aggroing. Certainly grapple mastery would come in handy as well as air jump. What I’m kinda iffy about is that decoration crafting skill. That will allow you to make decorative rocks but it’s gonna cost more spark if you don’t have the crafting efficiency. Mass crafting is quite useful though when you have to craft a ton of refined rock. Hopping over to another character all the time just for crafting some refined rock is kinda annoying. I wish you could fit in the decoration crafting with full efficiency though but that might be rather difficult without sacrificing on something.

Shovelling doesn’t really need to be maxed to be very efficient, but if you wanted it maxed you could easily take 5 from zeal without seeing much of a difference in energy as far as the time spent eating, and if you didn’t go full mastery for shovelling then you can use the 5 for gathering epic and still not feel much of a difference

But then again this build is not future proof for the new tier of worlds that are coming in the near future. I would like to keep the build ready for when that comes.

Also as mentioned in @Jiivita’s video, the gem hammers use quite a lot of stamina so taking points from zeal is a bad idea. You can achieve a pretty decent build but yeah, this still forces you to make some sacrifices. Might not be too bad for you but when making this guide I set out with the idea of making the most efficient builds with the least amount of character slots/skill pages as possible.

Oh and bear in mind that the gathering epic actually doubles the drop chance on boulder’s and fungi! Extremely valuable skill for getting those orbs!

I got just 1 character and im gold. Bosss