The publishing rights are reverting to the IP owner of Boundless

It isn’t the only one either… two other games in the last few months here with the same, scroll down and you’ll see -

Square Enix Collective, a division of Square Enix Ltd based in UK, focus on investing into teams and games and working with developers to get their games distributed digitally.

Not sure what is going on but since it is out there on their site, I decided I’ll share. It DOES say the game will continue to be sold. And too much speculation isn’t a good thing I know. As someone heavily invested in the game, I’m more posting this to try to see, with them saying this, if the devs can give us any updates on what the public server status is now?

And of course I hope it is/will be picked up by someone who can bring the game to the potential I know it has.

That is my fear, and I know others will be thinking the same… I hesitated a bit to post this when I saw it on their site even though I knew eventually someone else would stumble across it, because I know the issues with speculation, but since we know for sure from Phil that SEC was covering the server costs, I do want to see if the devs will be willing to give us an update now, to help with those fears.

Well since they continue to sell the game it’s only right they announce the issue and give us a clear foresight into the future of this game.

There is some change for sure on SE what i can say the links are returning to me a 520 error and the french website is completely broke , what is going on? IDK… but it is a bit scarry

I got that same error. I just hit refresh and the page came right up.

Yeah, when I went back a bit ago wasn’t working but now it is, but here is a screenshot of the Boundless part in case it goes down again - 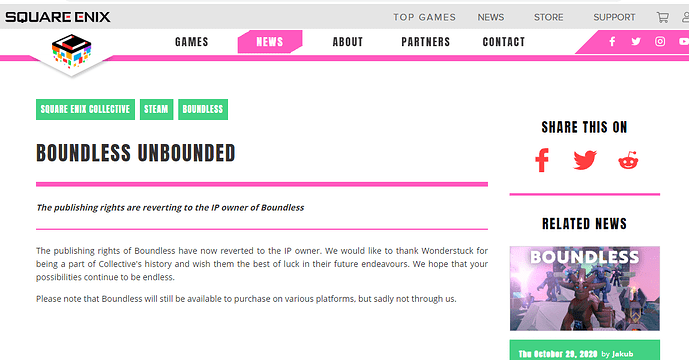 Yeah fixed for me also.

If i understand well ,does it means the server costs are on Devs Hand right now?

One can only assume by reading between the lines

I really want this game/company to suceed though…Minecraft even with mods didn’t keep my attention like boundless did. While, boundless was not perfect. James and the team did address some major issues with the world regen and meteor’s not spawning. Hopefully some official non-SE news will come out to address this change and lack of updates and such.

if it does close, I had a good time and boundless will always stay in my mind & heart.
of course i wished for my boy to be able to play boundless, since he is the boundless baby boy…
even then that takes years and I’m pretty sure that not happening

Yeah, that is what I’m wondering about - it is possible that SEC might have worked out the equivalent of a severance package with these games that could cover stuff like that for awhile? Or someone else might be interested or already picked up the rights? Fingers crossed we’re ok.

Totally this, I hope it continues, but regardless of outcome here Boundless will always have the most special place of any game in my heart.

Nooooooooo if this is the beginning of the end, I’ll be devastated

Everyone forfeit their silver to me before this weekend lol

I wonder what that will mean for those who still have years of gleam club bought? If the game closes, will they be issued a refund for the additional time?

Well I mentioned this in a PM but if I were a developer of a game that had a community I would have announced this was coming the day it was put in to terminate the contract.

I mean it’s damage control and if you cared about your community you would post something stating this was coming in order to prevent speculation and cause some of the community to leave out of fear.

While I will keep playing the game, I do not agree with the constant lack of communication with the community.

I hope for the best for the game, but personally I hope they sell it to a dev team that cares about it’s community or at least shows that it does.

I think we should take it how it is written. It says publishing rights get returned. Companies do not always have one big contract with many conditions with other companies. They have often several contracts with one company that are split up in categories around conditions. Here it’s about publishing. So maybe the contract about that was a time limited one. The contract about the servers might be another - separate contract. So I recommend not that much speculation since alone the rights of publishing are returned. That could have good and bad influences. But reasoning could be that SE is just not identifying themselves with boundless and what it became anymore. There’s enough negative stuff going against the game, maybe they don’t wanna be part of that anymore. BUT still support wonderstruck with server services for example. All we know is, -that we don’t know anything. So stay calm, lean back, have a coffee or tea and let’s just watch it

I think we should take it how it is written.

I agree and wish people would just focus on what we know. Creating all these other options or fears does really nothing in the long run. I agree an announcement from the Devs on this would have been nice but honestly what good would it have done? Nothing because all that would come from that thread is a rush of questions and demands to tell more. So a post from James wouldn’t have changed anything in the larger scheme of things… many people would have just attacked him anyway for the lack of communication. I always see it as “nothing really changed that was major so don’t post because nothing else is changing” based on how the Devs usually communicated.

For people sustaining a bunch of rentals like me, I think it is fair to ask here, and we’re only human, loving the game there is going to be fear and speculation with something like this. Phil said they were covering server costs, and now that relationship is severed. Maybe as May said there is a separate deal for the servers from publishing, but the wording looks to me like a complete break.

I do think an announcement from the devs would have done some good by giving us clarity, not having to have us stumble across it online. Would we have asked for more info? Probably, but they don’t have to answer everything. It looks worse this way. Like I said, I hesitated to post it, but I knew if I didn’t someone else eventually would find it and would, and I’m trying to keep things reasonable here, and as positive as possible, and I think all the comments here are very reasonable, there isn’t any attacking, and plenty of well-wishing.

I think for my part that if the game was to be stopped, the Devs should let us know, James had said that the game would be maintained and now we learn that the game is no longer in the hands of square enix it makes no sense.
The most worrying thing in all this is to see a community left in the dark without knowing what the future holds.
I think that, like many of us here, Boundless has become an important part of our daily lives, not to mention those who have supported the game from the start and those who continue to support it today no matter how it’s done.
Some will see the lack of players, others the lack of content, and some the lack of information but in the end the result is the same for all of us Fear, the fear of seeing boundless die without knowing why.

I address the end of this message to @James: For the love of God and the love that this community has for Boundless, please enlighten us! A simple “We plan to:” would be a good start. Thank you.