Palia does a lot of things right that I would like to see in Boundless too.

If memory serves, was there not an automated process for adding home worlds when certain numbers of players were playing concurrently?

The steam free weekend about three years ago caused Dzazzak and Trung to spawn, did it not?

As far as I know, this system was discussed but never implemented. I’m not going to dig for this, I vaguely recall that they may have run that system supervised (a sort of test run) to generate those planets - but it was not automatic.

Specific reasons have been discussed for this, including the fact that a couple of zealous players could alt-spawn entire planets, and the company would then be somewhat obligated to keep them online “permanently”.

So it was at least partly developed, but never unleashed.

EDIT: There was also some threshold based on plotted area. However Luca did come out during the early phases of the krasniy stuff and state directly that plotting on Biitula (or any other planet) was nowhere near this threshold.

It was never entirely clear to me as a player/customer whether that would have spawned worlds based on individual planet stats, or regional/overall stats.

That makes sense, that they wouldn’t have an automated system for the reasons you stated.

I think James said awhile back that players trying to access/connect to a world or portal was one of the main factors in whether or not a new one might spawn.

He did also say new worlds are generated based on concurrent population, beacons, and some other factors.

I could be wrong, but I think a couple of the new planets that spawned after launch, were done automatically. I assume it’s manual now, especially since the population retracted a bit after the initial launch & they raised the world player max. We aren’t getting the “World Full” messages anymore when we try to go through a Known World portal.(pic)

Obviously, if a player plotted the majority % of a current Known World, something would need to happen. New players shouldn’t suffer spawning on it, for one. 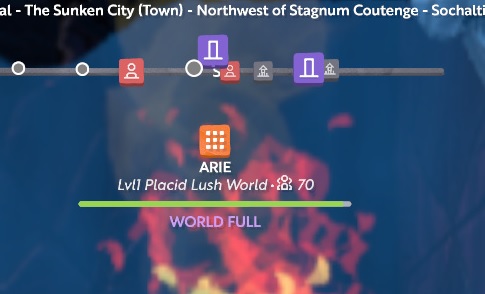 I could be wrong ,

Yeah me too lol because it’s way too far back and discourse isn’t great as an archive. This subject isn’t worth the research

but I think a couple of the new planets that spawned after launch, were done automatically. I assume it’s manual now

Right I think they had it working. I don’t know how much they ever used any of it really though, and it was in fact stated at one point that any permanent planet generation going on (moving forward) was at the very least manually approved and observed. The type of trolling mentioned above was specifically discussed for sure.

I’m confident (but human heh) that the assurances that everything was manually approved were given by james during discussion of a bunch of players ganging up and plotting out some planets to see if a world would pop.

I don’t specifically remember a time when the world cap was ever at 70 players so that screenshot was cool! I do remember them messing around a bit, but I just started after release so a lot was going on and I didn’t necessarily understand it all

Obviously, if a player plotted the majority % of a current Known World, something would need to happen. New players shouldn’t suffer spawning on it, for one.

I am sure there’s a system of load balancing in place for this on the lower tier worlds. The spawning specifically - players are supposed to spawn in one of the least populated worlds meeting their criteria (region/level/etc…)

Still, I for one have no idea how bad it would have to get for a new world to be allowed though. So far the worst crowding-based crises I remember have basically been at tier 3

Luca never posted a lot so it might be easy to find but I’m not 100% sure it was luca who posted that Biitula was never crowded enough to trigger any of their “worry” thresholds.

At this point it’s just fun to chat about, a bit. I like this conversations warm fuzzy memories much more than discussing the behavior of the staff

Iirc it was concurrent players. A bunch popped back when Ult first started on Finata and servers were packed all the time.

The issue was the system wasn’t triggering since everyone was always on Finata, so it was packed despite reasonable world to concurrent player ratios. Ultimately they upped the player counts at least twice (three times?) I think.

Yeah, I think we started out with a low max like 20-40. Not sure if it was the same for all planets. Finata was the everything place and almost constantly full it seemed.

I don’t know how much they ever used any of it really though, and it was in fact stated at one point that any permanent planet generation going on (moving forward) was at the very least manually approved and observed.

They have profiles that are randomly selected like we see on Exo, etc. All of them did have automation, but yes I don’t know if they were no touch type things or some manual monitoring or “approval.” Exo’s certainly had to be kicked off but I’m not sure about new public planets. Either way I doubt we are going to see the numbers magically go up enough to spawn anything even if it is fully automated.

Those first few weeks we had constant planet overloads and inability to join. Biitula had many lock outs. They even raised and optimized the code to allow more.

I don’t know the percentages for public world gen. I assume it was based on tier though and not “across the board.”

I don’t even remember the release world count. 35 or something? times 40?

When I started finata was definitely a huge bottleneck but, wow. I’m thinking of threads asking why we’re not advertised to compete with games like WOW or take a run at Minecraft but It’s a shock sometimes to think about what the limits really are.

One thing is for sure, for a game with zero effort towards unification or significant social infrastructure, it’s come to seem like a pretty cozy universe. Even now with the numbers of sovereigns just sort of coming and going. It’s hard to consider shrinking it much.

Oddly there were no EU-US Comcast issues back then.

The game is abandonware, the silence is deafening from the wonderstruck devs and this news is only par for the course its a real shame but the writing was on the wall even way back when I played this game but this is not suprising I hope you all find other games to enjoy. I mean they never even gave people clothes to wear…

the silence is deafening from the wonderstruck devs

We don’t know if this will actually be anything useful, but…

Boundless now self published on Steam

We plan to share more exciting news about Boundless’ future in the coming weeks.

I mean I hope something comes from it and the devs give this game the attention it deserves dont get me wrong but its a believe it when I see it scenario. Ill be the first one to come back if it gets some serious love and attention and marketing. No Mans Sky came from a place far worse than this game is in, and its done so at no cost to the players and at what I would call a developmentally breakneck speed so we know its possible to do.

No Man’s Sky sold millions of copies when it launched. They had the cash to fix it. Boundless is what it is, but isn’t abandonware.

WOH-WOH-WOH, let’s not get crazy, here!

That and Hytale! So many options to pick from that are actively in the works.

There was a big drama surrounding Hytale in May, I believe some hackers had managed to post a fake message about how the game’s development was stopped, that Riot had dropped Hypixel, and that the future of Hytale was now resting on the generous donations of the players to keep the development going, with like a paypal link attached, and lots of people fell for it, thinking the Hytale adventure was dead. But Riot & Hypixel managed to remove the message and then release a new trailer showing new things. Pretty crazy stuff, but you can still see lots of Youtube videos about how the game is dead.

I could be wrong , but I think a couple of the new planets that spawned after launch, were done automatically. I assume it’s manual now, especially since the population retracted a bit after the initial launch & they raised the world player max. We aren’t getting the “World Full” messages anymore when we try to go through a Known World portal.(pic)

From what I remember. . . for the Free weekend they pre-prepared planets so they could be launched quickly versus having them generate and then be ready to be deployed. Maybe that is what they did at launch to be ready for additional players and to launch new planets quickly to avoid issues. From what I was told for the free weekend they had additional planets ready for each region, just in case.

I do wonder if the placement in the universe (distances from other planets) is something that is done automatically depending on the tier and region or if that is something that the developers have to figure out.

I believe the distance/placement of the planets was automatic. They could have possibly re-rolled planets a few times to get “a good one” or one that was within X distance to a certain planet.

I think it was a mistake for 50% of the Known Worlds to be over T2. In my opinion, each region should have consisted of mainly “residential” T1 & T2 planets, with a T0 tutorial/player spawn planet (with plotting limited to 100 plots or so, per account/IP on this T0). Perhaps just one or two T3+ in each region. I also think these residential planets should have been no more than 3 blinksecs from each other. Hindsight is 20/20 tho

I would tend to agree that since most players have bases/stores on lower tier, there should have been more t1 and t2 versus t3 and up. I think the introduction of sovereigns removed many of the issues with players plotting resource areas trying to block others from getting to them.

Unfortunately without upsetting a lot of players by removing some of the planets and then replacing them with lower tier, I think you are right and this is not likely to change.