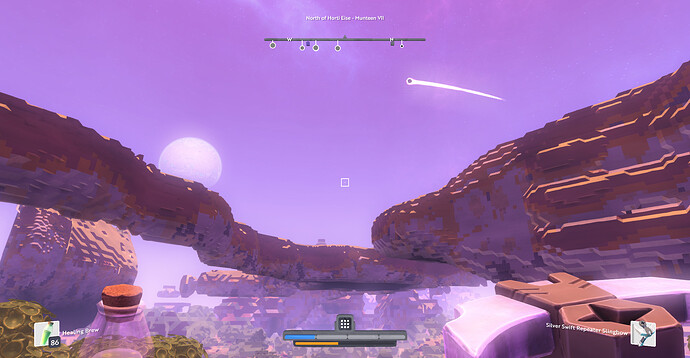 Internally we’ve been calling this our “Creatures and Combat” release in which we’ve been focusing on adding to the excitement of exploring and hunting. We’ve been improving the feel of combat with making the responsiveness and physics of shooting better, as well as improving the way we deal with hits and damage in an online, potentially high-latency game. The creatures themselves are much more accurate and dangerous, and have a huge number of new attack types and special moves for you to deal with. We’ve also added a new feature - Conduit Meteorites - which crash down onto the planets ripping out uncontrolled portals through which waves of creatures pour. Defeating all the waves of creatures allows the meteorites to be harvested for large amounts of conduit fused Oortstone.

The next releases will continue to build on this work, with a full balance of damage and skills to ensure that different play styles are supported in combat and for other areas of the game. Also the addition of new features such as Rage and Focus, Stamina and reviving. We’re not just focusing on combat though – we’re also planning changes to the recipes in the game, and a lot more resources to collect from exploration, hunting and mining.

If combat isn’t your thing, then don’t worry - Boundless will be equally playable by players who want to avoid all combat.

Please report how these networking changes perform for you in comparison to the Live version. Hopefully there should be reduced latency and rubber banding. We’re particularly interested to hear how the game performs for players who have experience consistently bad connections in the past.

Please share feedback on the balance. It’s a work in progress.

The Mac OS X build of Testing 183.1 is currently broken and will be fixed ASAP. -
FIXED.

This is amazing!!! My only concern is Oort stone availability. Recently I haven’t been able to play as often as I’d like and my Oort shard stash has dwindled and I don’t have the time to continue restocking them which means al my portals will soon be gone. Will the meteorite method provide faster means of collection?

Improved projectiles fired by creatures, its projectile attacks will now be able to hit you very accurately, so you must be much more nimble to respond to the projectile once it has already been fired instead of being able to easily trick the AI into firing wildly far from you.

Love! Thanks for all your hard work, Devs!

There might be a few deployment gremlins - so read the release notes whilst we’re getting it sorted.

Can’t wait to try this

It’s now no longer possible to have a beacon without a beacon control.

What happens to existing beacons without beacon controls when the update drops? Do they just become unclaimed?

What happens to existing beacons without beacon controls when the update drops? Do they just become unclaimed?

Nothing will happen to them.

Fixed a bug where the client would mispredict hitting a creature if the projectile hit the creature at the end of its range just before it would have vanished from travelling too far.

thank Jesus. This was annoying as funk.

Fixed a potential server crash where a user was able to interact with a new character in an unexpected way before the server was alerted to the character creation.

Does this still exist on the live server? Might be a good idea to delete this from the testing server notes…

Placing blocks on dead creatures with their items collected was also an issue. Is that fixed too?

Placing blocks on dead creatures with their items collected was also an issue. Is that fixed too?

The fix in the post was to do with creature projectiles hitting dropped items or loot instead of ignoring them.

The issue you are mentioning is currently intentional because it prevents players from griefing other players by hiding a loot-able creature. The area will be available to place blocks again after a short period of time. We are thinking of changing the visuals to highlight this so when you loot a corpse it does not just vanish.

@james how shall we calling this meteorite technology that spawns mobs?

(new) Signs float after destroying blocks they have been placed on. 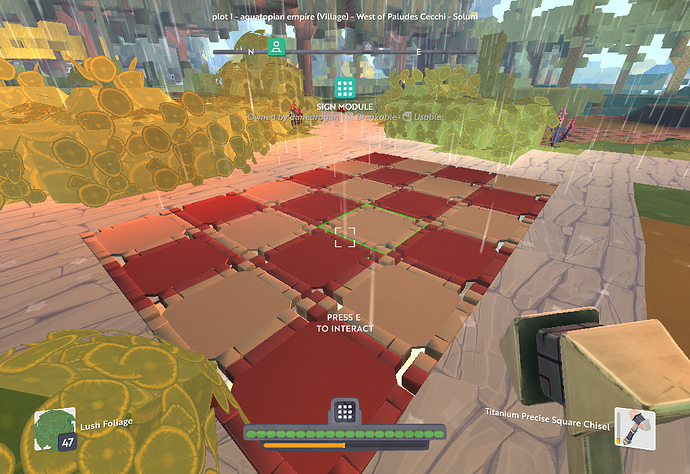 This was originally reported in the issues topic for the live version, and the response given was that some signs will float by design, but other types probably should not.

what you mean by float by design
thanks for the reply

is this just oorstone or some kind off special oortstone

I’ll grab the original quote from that topic.

Signs can be free-standing in space by design yes, though perhaps the sub-voxel standalone sign pieces “should” be dropped? But definitely the larger modular signs should not.

Sanctum + Tutorial + Objectives + Progression:
Changed it so that you can warp any distance with any size of Warp (skill limit still applies). No more frustratingly large Warps required. The ultimate aim is to encourage Warps constructed in the worlds rather than using the emergency Warps in the Sanctum.

this only applies to the black warp conduits and not the white/grey portal conduits, correct?

and as for the new meteorite system, will the loot be specific and/or randomized for each player such as when looting the corpse of a creature, or will it be limited to first come first serve (in the event of large party meteorite raids) ?