Right. i have been thinking about this for some time and thought i should throw it out there.

Titans will be a great part of the game, and are a necessary to progress through tiers (as of now) which means that there are great debate on how it should be done, especially after the latest survey, some of us wants to have an epic boss battle that will be insane even for the best while others want it to be soloable because they cant be bothered to group up with people.

i made a talk about titans a long time ago and i kinda stand with it,
https://forum.oortonline.com/t/titans-in-oort-online/67
but this is somewhat more specific which is why i keep it in a post for itself:

This post is a suggestion to make sure a titan is not just a titan, meaning if you have seen one you have seen them all, which seems to be a bit of the idea by the devs judging by the art 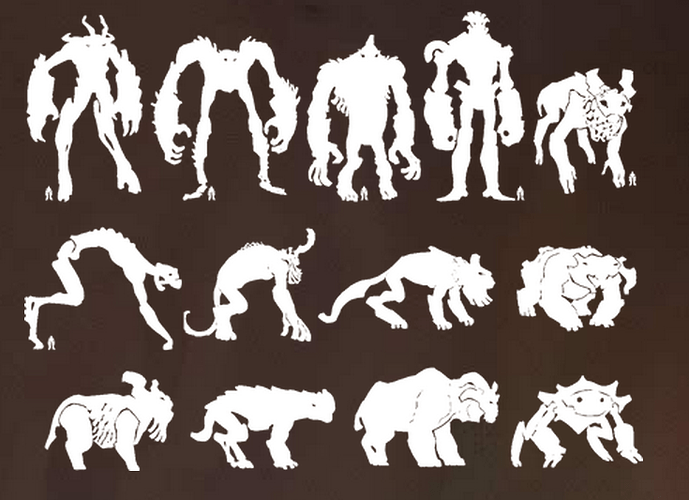 For the types first, i think they should be split in 3-4 which could easily be expended and have different purposes

Giant: Slightly smaller than a titan, is usually found wandering around in certain areas and killing everything in its path, it is not nearly as powerful as a fullgrown titan so it can be taken down by 1 really good player or 2 decent players working together

Guardians: These are the titans made by the ancient oort people to protect their temples and treasures, will wonder around an oort temple and attack anybody who gets too close, will take 5 good people working together to tear it down, minor mistakes can happen but make too many and you will get killed

Ancients: Ancients are the most powerful of the titans made by the ancient oort people, they are so strong that the Oort deemed them a danger and sealed them deep within caves found around the worlds, these are the Raidboss titans who will take 10 really good people working together many many attempts to kill, 1 mistake and you are gone, only for the truly hardcore who seeks a good challenge, on the other hand the reward dropped is worth it.

then you could add more depending on how you want it, there was talk of making a titan like a siege fight so maybe siege titans, the possibilies are endless.

Now for the ‘‘classes’’ of titans, i think titans should be different to fight and again not just making a titan as a titan, even within the ‘‘classes’’ they are different, but its just so you can categorize the titan and get a somewhat idea of how the fight is gonna go, for now i thought of 3 classes.

Brute: the big and heavy titans, pretty slow but have a ton of health and hits hard as hell. these are the guys when they hit the ground they just make a crater, do not get hit

Agile: The smaller titans which are not quite as heavy, dont have as much hp or raw damage, but they attacks and moves much faster than a brute

Magus: These have ranged attacks and are one with the magic used to create them, they will not enter direct combat but use abilities and special attacks,

And then within these there are differences, you might have a tank brute where you need to attack certain areas because he is so armored and a ground brute which might focus on making rifts in the gound, then there could be a stalked agile which can go invisible, and a speedster titan that cant but run alot faster, Elemental magus that will shoot flaming orbs of fire and a Necromagus who will make minions to fight for him. and so on

well those are just random thoughs and might not be possible, but i suspect it would be good for those who keeps saying ‘‘i want to solo a titan’’ while keeping something do to fight for groups who want a real challenge

Nice idea, but instead of good players i would say you need to be Great, or very very experienced and they all will take tactics.

10-30 minutes no breaks for the smallest (Giant)

and anywhere up to an 3 hours for the ancient.

it would all depend on how many plaers there are cause most likely it will be alot of players round each titan at one point, due to the fact the bigger the group the greater the chance.

Over than that im all for it, the titan battles should be hard though, and the ancients should be hard enough that hardly anyone can do it, sorta like the current trials on ESO, since the update 3-4 groups have done it in less than 3 hours, everyone else dies.

That sounds like MMO Shadow of the Colossus x100

Better get on it…

so you can play with every group size, and u have something for hardcore player who like to play as a big group ^^

i really like the raids in wow with 25 player ^^

Good idea that would be able to keep all players happy

that would be able to keep all players happy

This isn’t a thing that can/will ever happen

A made a huge reply to your first post of the titans maybe you read it. And i thank you for this idea because it supports what i said and what i want so you get my like for this. Mostly because of the three titan types.

So i wanna stick in another suggestion here that , what i think, perfectly suits this idea and its talking about the titan loot.

When we consider the 3 Titan types as you mentioned them, the loot should be the following:

The Giant types will wander arround so all they have is with them.

The Guardians will not only have their own loot but the place they guard will have some too , its something i said in the other post especially about having enough loot for everyone in the group.

The most special ones will be the Ancients, they should drop some really epic loot but when you say they should be found in caves than i have another special idea (before i lead to my main idea :D). Make the cave already tell you that somewhere in it you can find an Ancient by containing special ressources, ores or something like that, you can only find arround Ancients. It would give it a nice wow-effect and also a warning and better planning that you dont tumble into one since in a clossed area it could be your instant death considering this powerfull creatures. It would give ‘finding an Ancient’ more value to itself. The Ancient drop, well could be something really nice, really good, but should not something you really need to progress rather too improve something like weapons, armors or beacons.

The Guardinas and there home should contain the loot you gonna need for progress.

And finally to my actually suggestion which a friend of mine came up with.
Make the Giants be mineable. Once you defeated that Titan it drops down and became the loot itself maybe because his body is made off some special stone, ore or whatever or he has valuable bones.
I really mean that you can start to mine that giant with your pickaxe, or other tools defined by what kind of giant it is.These guys should really fit to the type of world your in so you can guess what kind of giants to expect. The kind of ressource they offer should me mixed by something you can only get from them and something you can just rarely find somewhere else. I especially think of the ore-like giants that you can find their ores in some caves too.

Well and it should take a while to complety mine them empty … you know i like peace and order in games like this but without some competition and fights it could get boring and these giants could become some sort of valuable ressources to fight for against other guilds or whatever :D.

Make the Giants be mineable. Once you defeated that Titan it drops down and became the loot itself maybe because his body is made off some special stone, ore or whatever or he has valuable bones.

this WAS partially confirmed by james ithink it was, somebody mentioned it and he said something along the lines of ‘‘well you read our mind’’

EDIT: ah here we go, it was ben
https://forum.oortonline.com/t/titans-in-oort-online/67/8?u=zouls

Make the Giants be mineable. Once you defeated that Titan it drops down and became the loot itself maybe because his body is made off some special stone, ore or whatever or he has valuable bones.

Have you been looking through our windows?

EDIT: and besides i would need very good eyes to see through your window from germany ;D