This week we’ve been reviewing all the feedback and ideas from the recent Testing releases. This has mainly focused around the Objective system and exploring alterations that gives players freedom to explore their own path - which has always been the ambition.

The high level aim of the Objectives are to:

So now you know how to play the game, what should you do next?

I think we have a some solid ideas and will make sure they’re shared for community feedback.

From a release perspective we’re working to migrate the Testing version across to Live, but this will not happen until we’re happy that the Objectives are exactly how we want them. So it’s likely to be a few more weeks.

Code
We started the first pass implementing the throwable Bombs. These are thrown grenade like objects that bounce around and have a timed fuze. When crafted they will support a wide range of effects beside explosions, including buffs like healing and penalties like slowing targets.

Further work continues on the Tutorial and Objectives. The GUI skinning continues with the character screens, beacon and settlement screens getting a visual update.

A first pass of the Character Customisation is now complete and is sufficient for us to test the character assets in the game engine. We have some more iteration planned before this feature is merged into the Testing or Live releases. We added some new prop blocks with six variants of plants, rocks and fungus.

We have started work to allow more threads to be used when meshing the world. This should mean that loading (assume you’re not bound by networking) and world alterations should appear much quicker. Ultimately this will make the game feel more responsive and make better use of the available hardware. We worked on further optimisation of loading and memory for PlayStation 4.

Design
This week Luke was poring over the feedback on the objectives system and tutorial from the community, and together with feedback from our own internal play sessions he’s come up with a plan for the next iteration. He’s also been preparing some posts for social media, so watch out for those.

Ollie has spent much of the time setting up a new project management system (exciting!). He’s also been prioritising the tasks in our backlog to work out what we should do next.

Rob has been exploring how best to communicate player status in the HUD.

Below is the current visual target for the complete HUD with all elements activated. (Before anyone complains that it looks too busy - this is with all the elements activated, it will not normally look like this!) Let us know what you think, because now is the time to get feedback and make some changes. 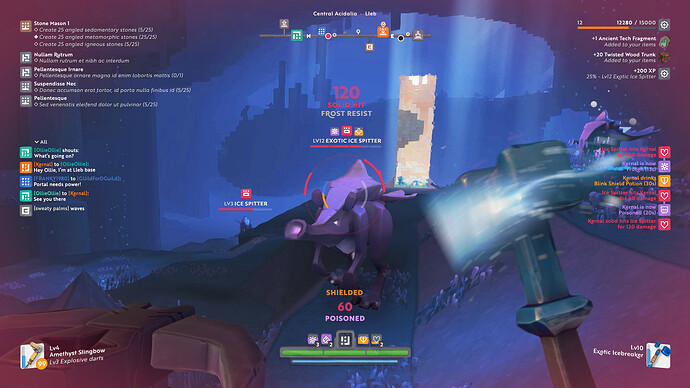 Art
The art team has been busy working across a wide range of areas. 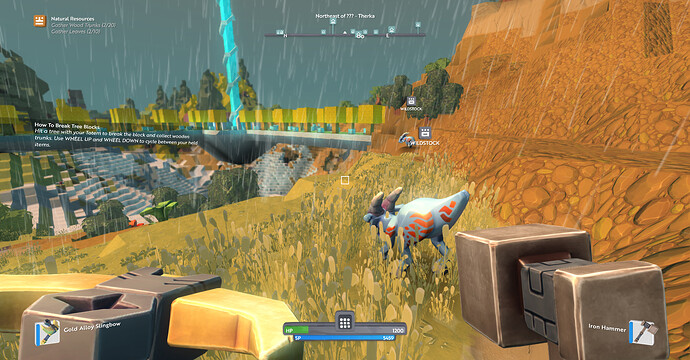 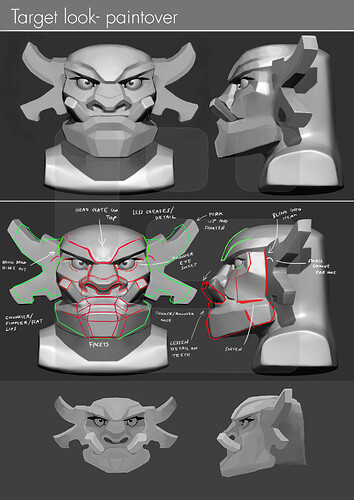 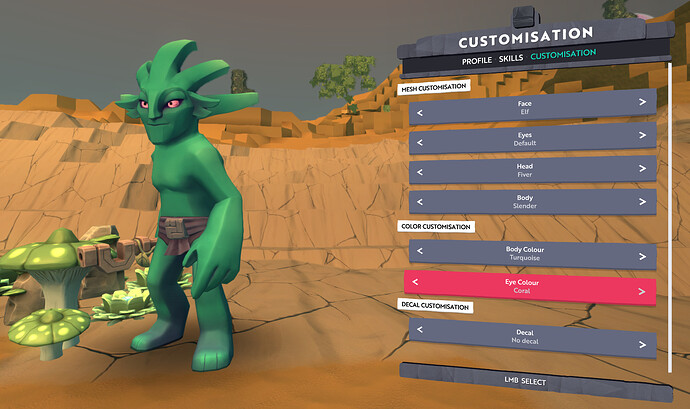 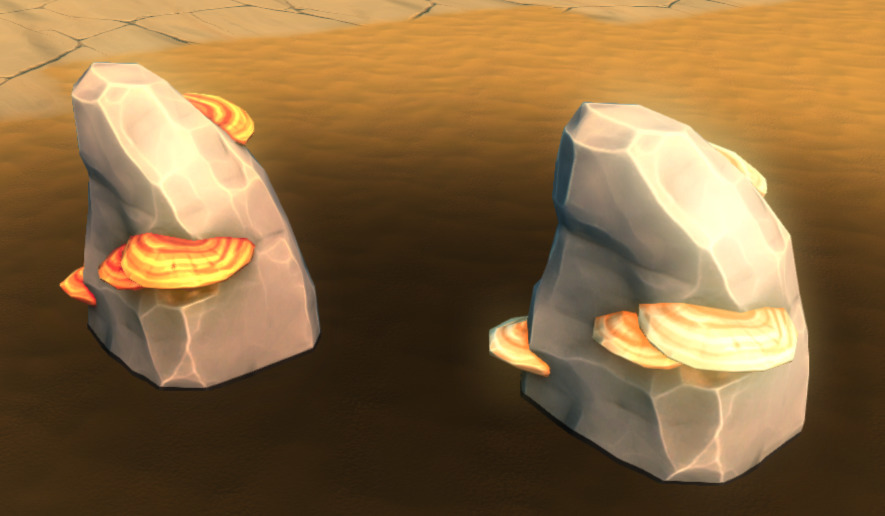 Here’s our progress of the set all here using the same tint as a plant model. 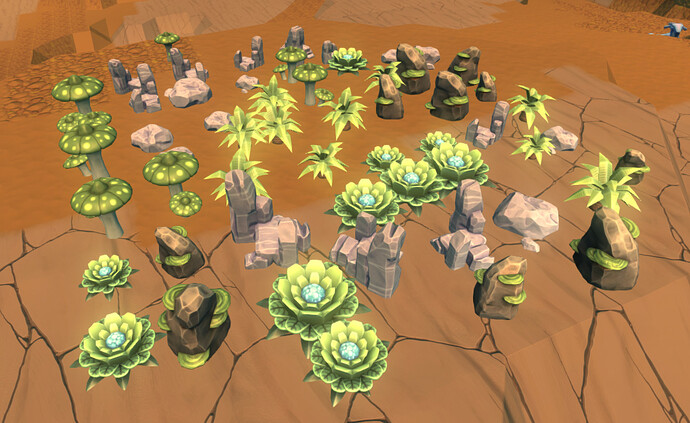 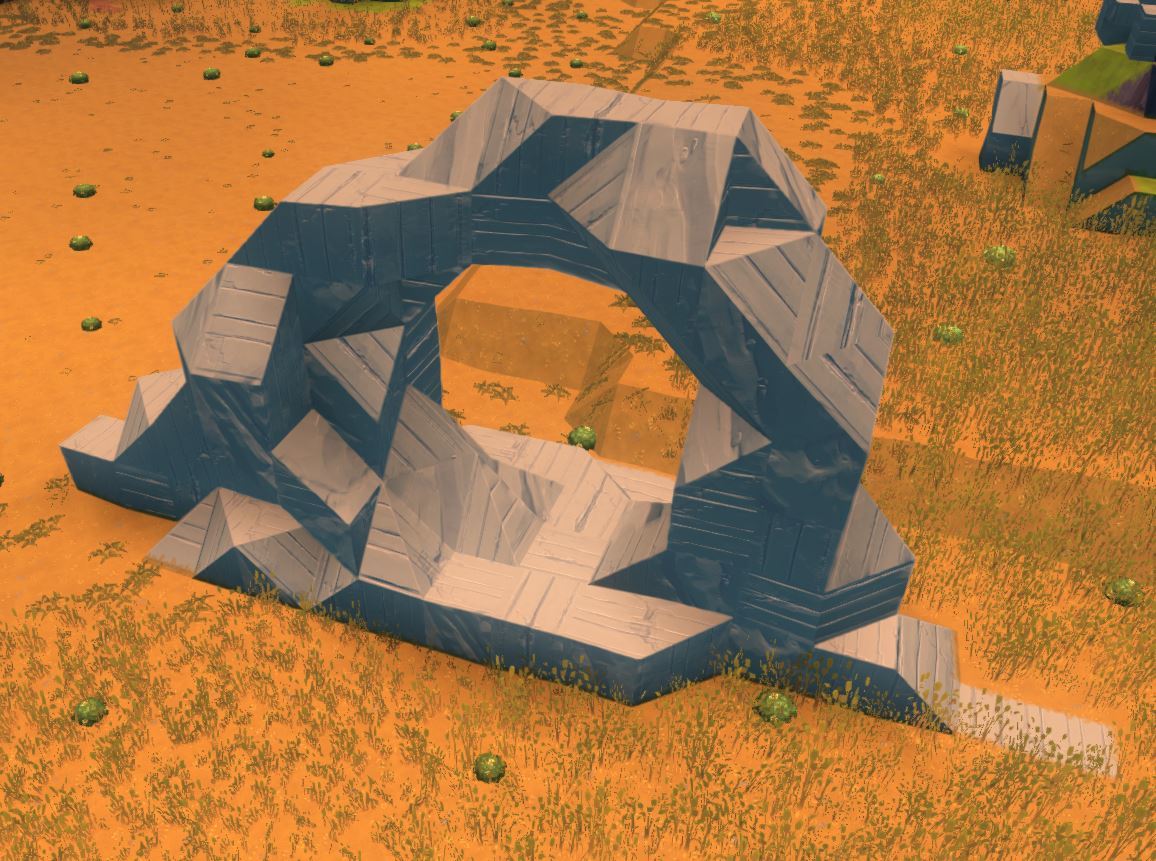 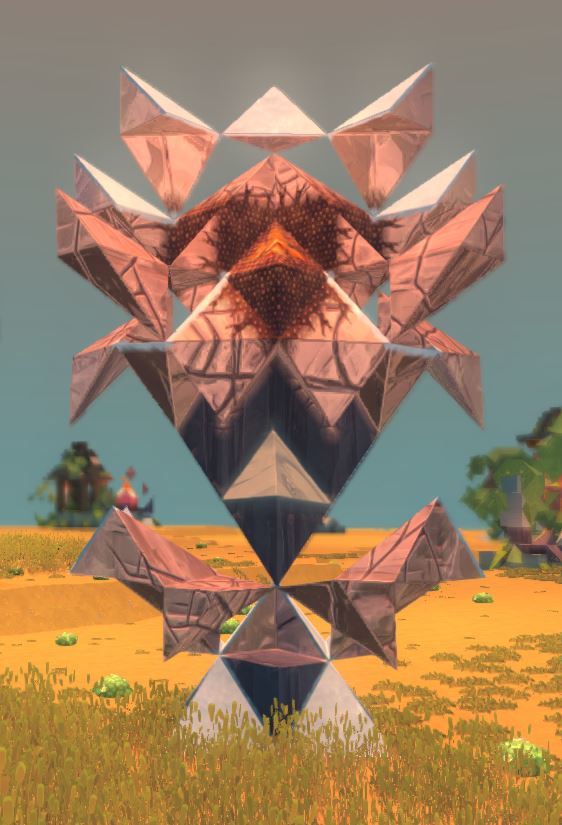 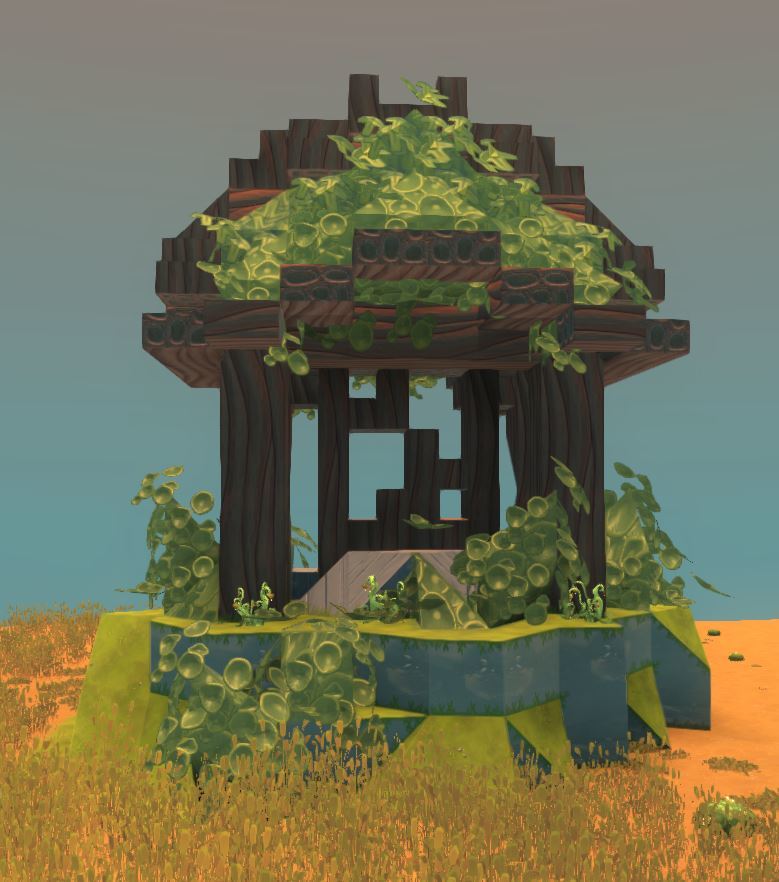 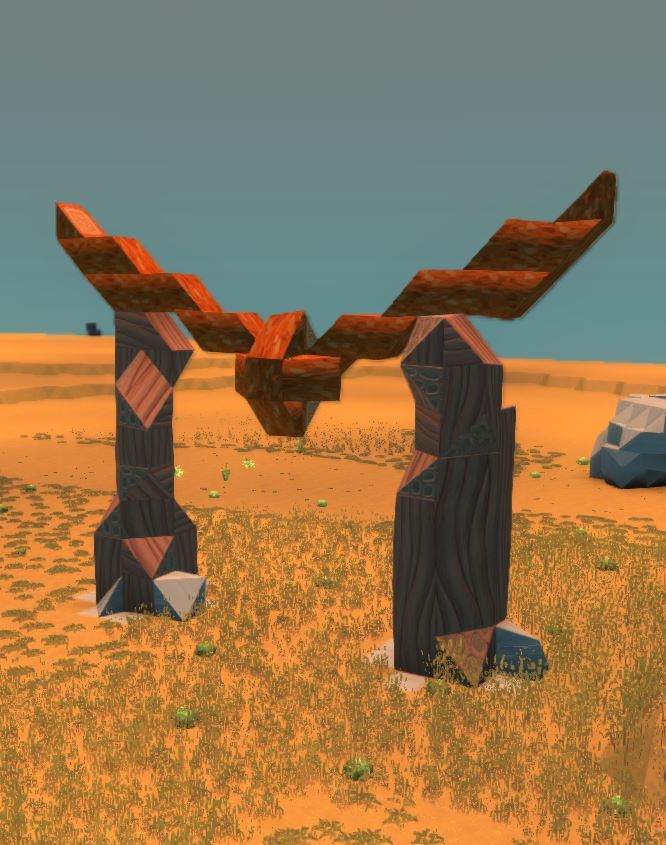 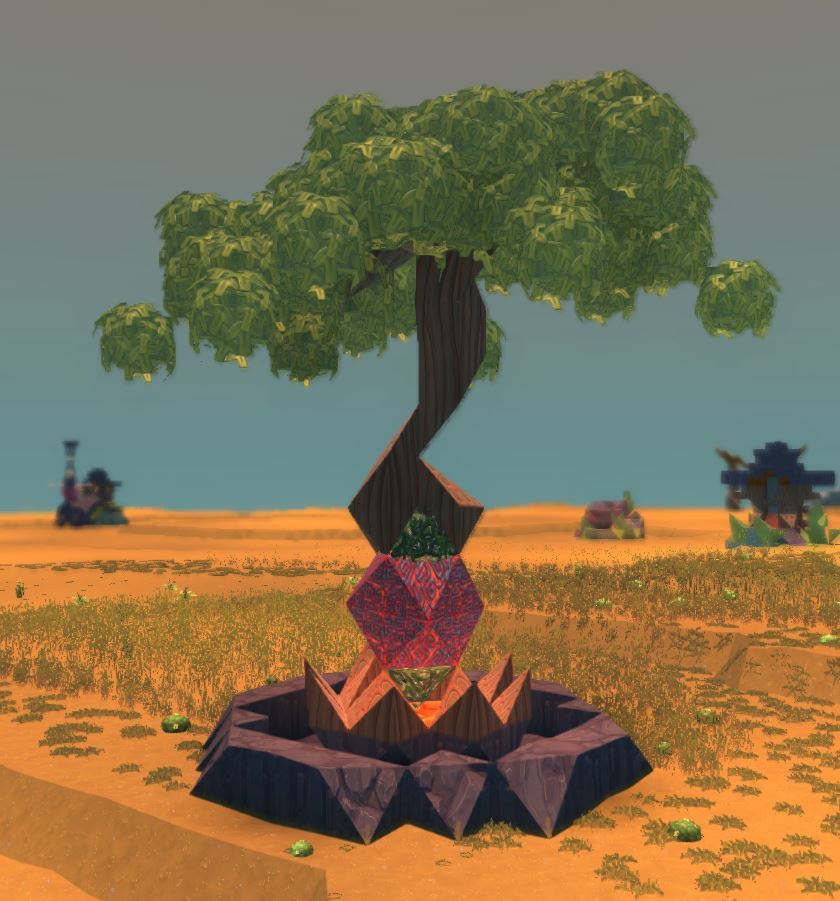 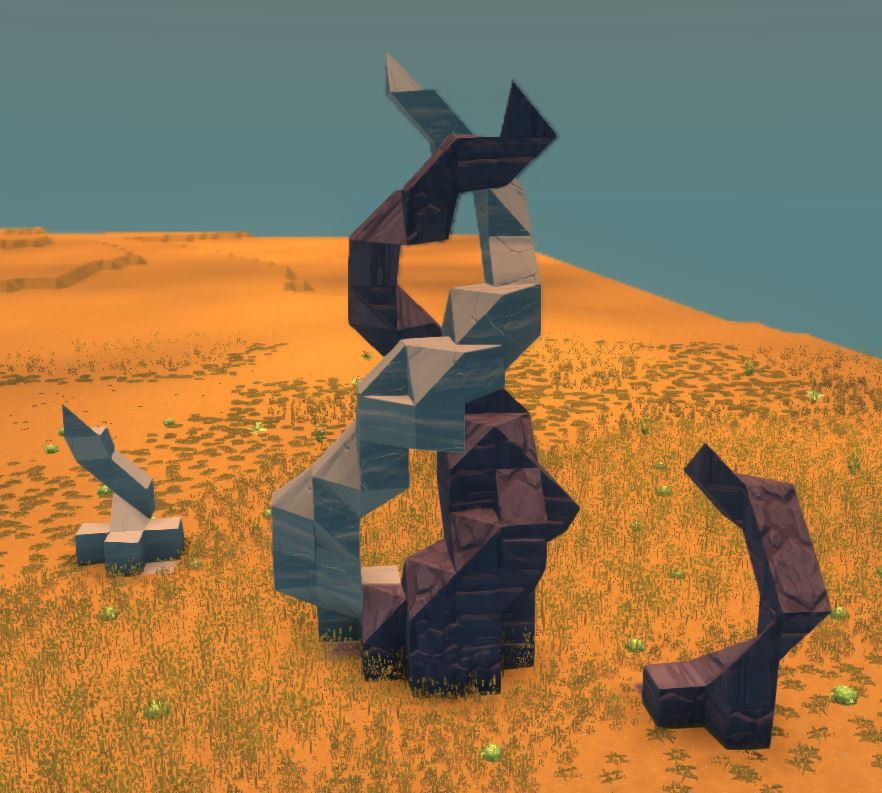 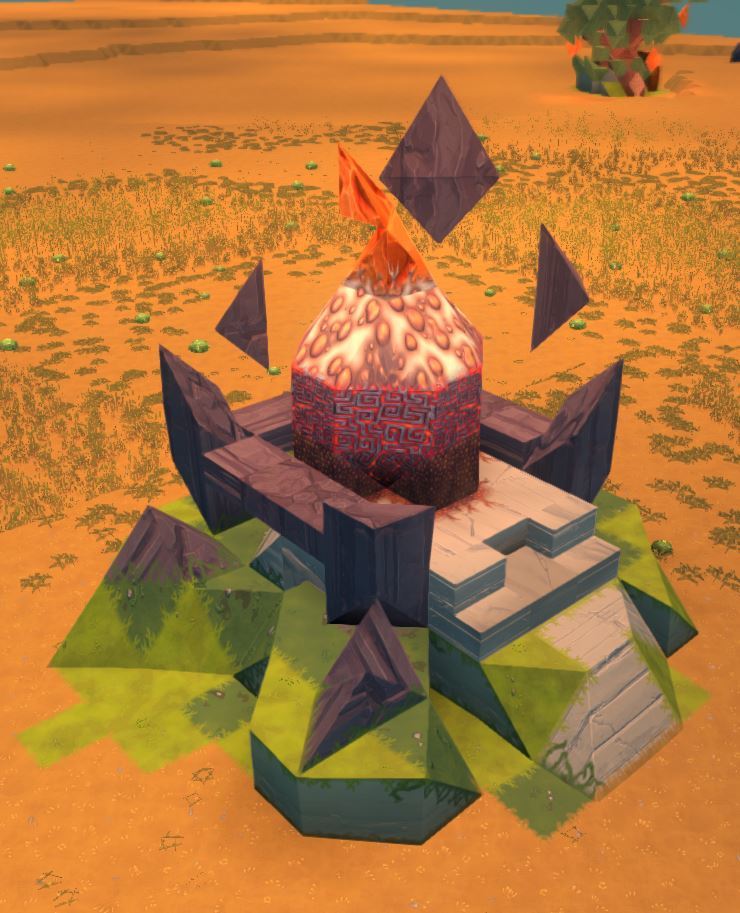 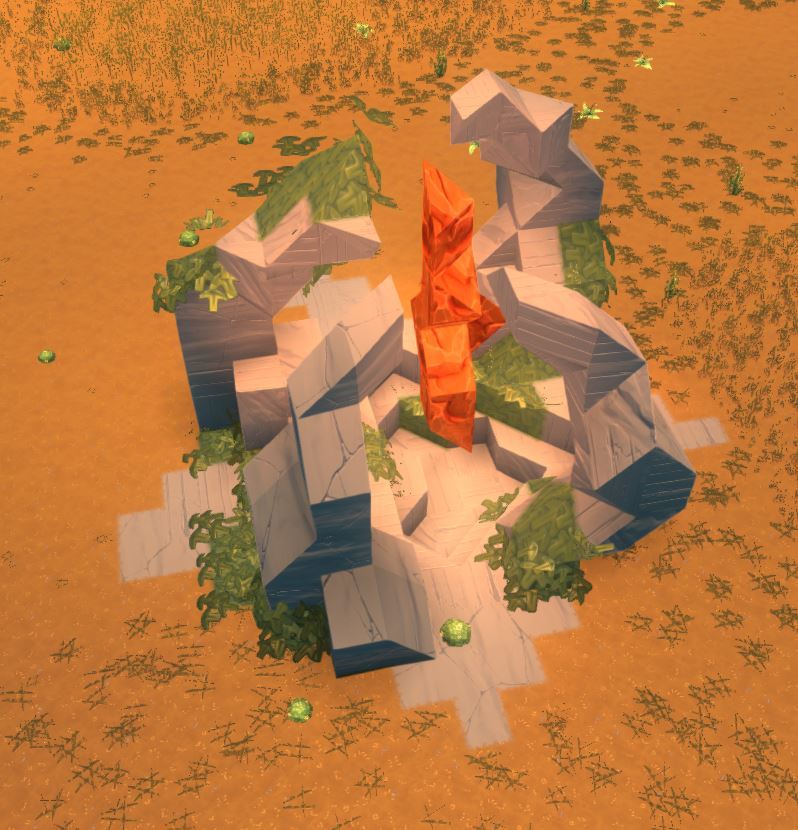 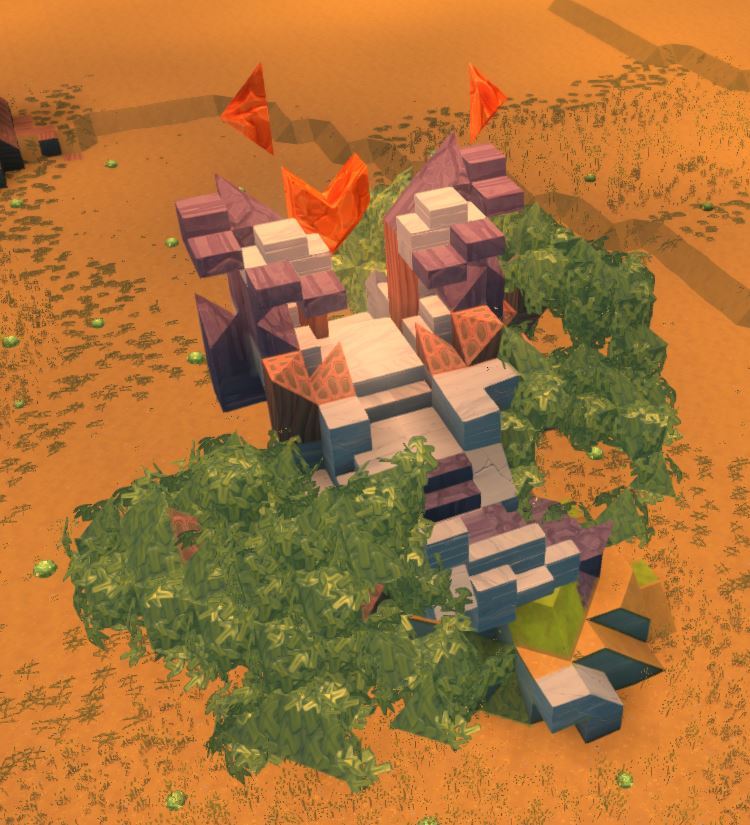 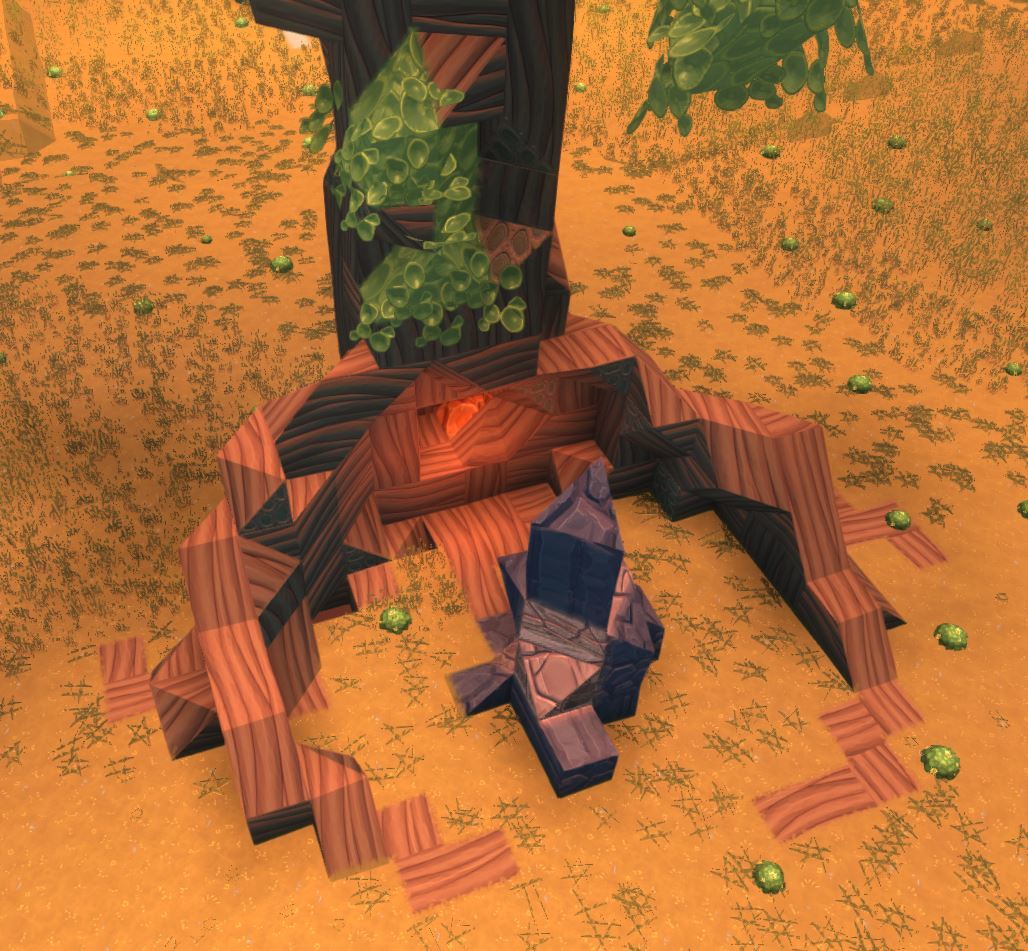 World Builder prefabs are always welcomed especially if you have a crazy or fun idea of something we can hide in the worlds for players to discover!

‘Exotic Ice Spitter’… as if the regular ones weren’t annoying enough!

I love these new shrines. I’m now inspired to recreate some of these in-game.

Cool stuff! I like the new HUD concept.
But… not really a big fan of the circular HUD in the middle of the screen blocking/distracting the view.

and pretty much everything

I found interesting the use of latinesque (or maybe actual latin) language in objectives (the screenshot with ice spitter) ?

I cannot believe how awesomely this game is shaping up! I love the pre-fabs with what looks like corrupt blocks and orange gleam.

I also do not mind the busier HUD at all. Honestly, not any busier than most other MMOs, and as long as we can take it off for some screenies, I think there will be happiness all around.

As for the pic with the Spitters…OMG RUN!

Looking forward to the next few weeks! You devs are really doing some great work!

the “latin” is a place holder for actual text. Sorta like when you look at a template of a word document and it has those random words that mean nothing. It’s going to be replaced with actual content when the update goes live.

It’s basically just to show off the upcoming HUD design.

I really want to learn world builder and try to match up to those awesome prefabs.

The new hud looks great, we’ll just have to try it and get used to all the data shown.

This game just keeps looking better and better! I am a huge fan of the new hud. Excellent work. Cannot wait for this to go live in a few weeks!!

That Character Customisation looks really cool with the new model! Should be scope for some really cool variations in there! If you’re planning on having the full 256 colours available to choose from, it would be pretty high odds of you spotting 2 identical characters

(and that’s even without decals and wearables!)

HUD too busy? No way! I think that looks just about the right level of busy! One thing I have experienced with the current HUD text in the live version, is not being able to read the white text when being too close to a light source, so wondering if it would be worth adding some stroke or shadowing to it to help define it more in those situations?

not being able to read the white text

And in many other situations. Reading chat has been very involved for me since I have to stop what I am doing and rotate until I match chat with darker background.

Wowowow what an update, loads of cool stuff. And the GUI is looking

HUD looks really conveniently. As I understand,after action (e.g. drinking Potion) text will appear for a few seconds on your screen and then dissapear? Or the action text will remain in the small box on your screen until other actions will take its place. Would be usefull to have options in settings that allow you to play with HUD

That’s the GUI I’m talking about!!!

give all kinds of stats, I don’t even need to see the actual game

Reticle is way too awesome.

As far as the HUD is concerned, I do like how much information I can get “at a glance” but I don’t like how concentrated it is. Will you please allow players to customize their own HUD with options like opacity, size of different aspects, and location of different aspects? Also, I hate the tilt on the chat. It gets too small on the far right. I’m not saying that you should remove that feature, but I think that it could be tweaked to have a background color and then for the player to be in control of text color and tilt angle.

Please? Pretty-Please? With a cherry and whipped cream on top?

I think that the font for text could be improved. Mostly considering that it gets lost on bright surfaces, as well as getting too small

So it’s likely to be a few more weeks.

How do you think, can we hope that

will be released 1.0 before Christmas?

I like how neatly and carefully you developing the game, but it’s very, very long now. Each player from my community stopped playing because “It’s boring” and “nothing happens”. Many areas of succesful mmorpg not started to develop yet.

Sometimes people ask me “why you recommend to buy this game? it’s not cheap”
“because it’s cute” I can only answer