After much toil with the system of the infamous poles, we have started to narrow down the direction in which we would like to take them.

Initial exploration as seen below was looking at the visual progression of three material sets: wood, metal and gem/alloy.

We wanted to create a selection of visually appealing assets that do not restrict players to choosing the highest value material (in this case, gem/alloy) to add to prestige points. The idea is that we could have a high end decorative wood piece that would match the same value points as a decorative gem piece.

Another concern we wanted to visualise was which stylisation approach we wanted to take for best results that benefits well for variation, cost, customisation and consistency between different material designs.

Each material set has three upgrade stages, from raw->refined->decorative. They follow a distinct stylistic progression. Frames at the end parts of poles for better consistency.

Each material set has a linking, generic metal/stone frame. Material progression doesn’t exist and design across them fits in same style for better consistency.

Each material design are differently styled. No efforts made for shared consistency. Use of tinting system in attempt to blend different sets together.

Pros: Most possible design variations, cheaper
Cons: Tints may not blend perfectly due to different materials. 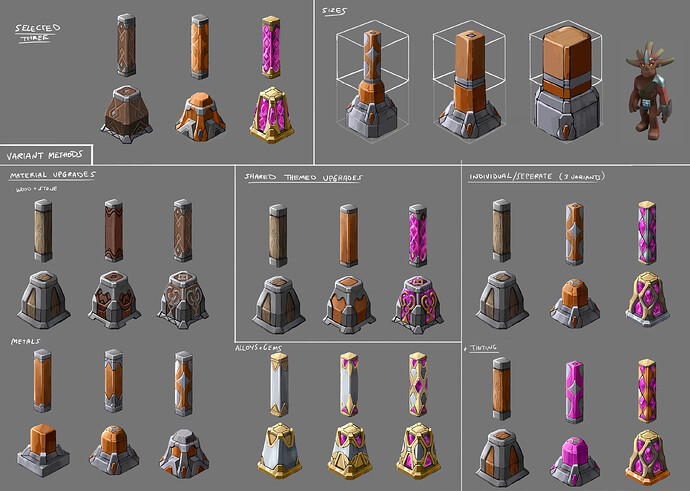 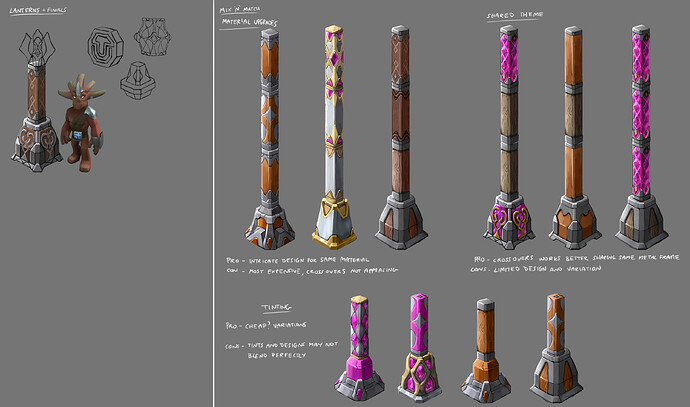 Eventually we’ve started to narrow down to something completely different, and much more exciting!

What we’ve settled with completely branches off from the first exploration, but taking some distinct pointers. We’ve decided that it would be better bang for buck to have vastly different designs for each progression. Rather than restricting ourselves to thinking of consistent designs, it is actually better to have clashes of bold contrasts.

We didn’t want to stray too far from the material’s personalities, so we’ve implemented a more themed approach: elven (wood), dwarven (stone), oortian/machine (metal), and mage (gem - this is actually going to be gleam and not gem).

The way progression will hopefully work with this approach is a design following a general motif of the theme, but distinctly showing a state in how much it is refined. For example, a ‘raw wood’ pole would be more of a twisty painted tree branch, as opposed to a ‘decorative wood’ pole, which takes the form of more structured and carved designs.

Hopefully this would be able to add variations and that all stages of progression and themes would be used to the best of their design and value. This point being that prestige may be more calculated for the variations of assets you have, rather than quantity of just high-end props and blocks.

I like the Idea of a shared theme. but maybe a shared theme for certain grades so like wood and stone would be the same grade and look similar, copper/iron etc. but overall they all look really good individually and I would be happy with any of them really

Great work, as always. These are some of the things I’m most looking forward to.

so excited about it

Now it’s just harder to not give enough love to any of the new concepts. I’m gonna be trying then all.

Seriously though, some bone or ivory pillars could have a nice tribal (cough-orkish-cough!) aesthetic, and I think would fit nicely with the tribal theme of boundless’s primitive people (as well as provide some additional use for this massive pile of bones I have in storage). Totem poles would compliment this aesthetic well, too!

I’d love to see some of these poles have head attachments for banners as well, just a thought

It’s like saying that WoW was first to have dwarves, elves and all in their lore

I’d say it’s Tolkien Alliance or general fantasy genre. What matters is that used adjectives most likely reflect general experience of most players and their thinking patterns

To be fair, these are the styles most people attempt to emulate. That said, Elven styles were always a tough one in Minecraft, due to their twists, curves and elegant architecture - there’s nothing elegant about square blocks.

Boundless gets around this nicely with it’s sloped blocks, specular lighting and clever little effects that give depth to certain block types (even though they’re techinically still square faced)

I think Boundless could lend itself rather nicely to these styles. I just hope these assets are slightly generic, so people aren’t pigeon holed into building Elven cities, Dwarven mines, Oort space stations and Dalaran.

My last sky island was very Draenei inspired - at least the colour scheme.

I for one absolutely Adore the new theme for the poles, it leaves a lot of options for building! Like if you wanted to go for a more natural fairytale cottage type home the twisty branch type would go beautifully. Or if you wanted a cool laboratory, or maybe a more primitive structure. They look so dang cool~

Question- what is it that you guys use to model? and texture?

im guessing you also bake the high textured versions onto low poly after they are made though? okay i was just wondering because i am just starting to use Substance Painter for texturing still need to get my zbrush licence but ill be doing it after the Wold Skills Competition in June

Yes. I usually make a blockout mesh in Maya to get the proportions/scale right, then take that into ZBrush to add the detail I want, bring it back into Maya to retopo, then bake normals/AO in xNormal and use those as the basis for textures.

I love them all! we need them in game ASAP!

These all look awesome - being a miner at heart, I want the Dwarven ones to go in a massive undercity! I’m hoping they will blend well together, so we can mix-and-match with complimentary materials etc.

the problem with massive undercities is that you need massive empty spaces, hard to get without infinite plots. but Stretch, you’ll make your massive dwarven city, and i’ll build my massive tree next to it and it will look cool as heck