Hello guys, it’s been a while since I’ve updated with concept art. For the past few weeks I’ve been working more on the decorative pole system which had eventually narrowed down to four distinct themes based on the material they were constructed of.

As a recap, these are the four themes: 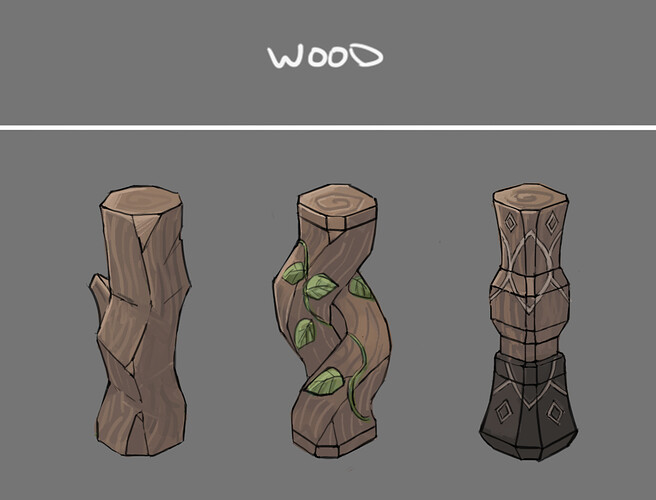 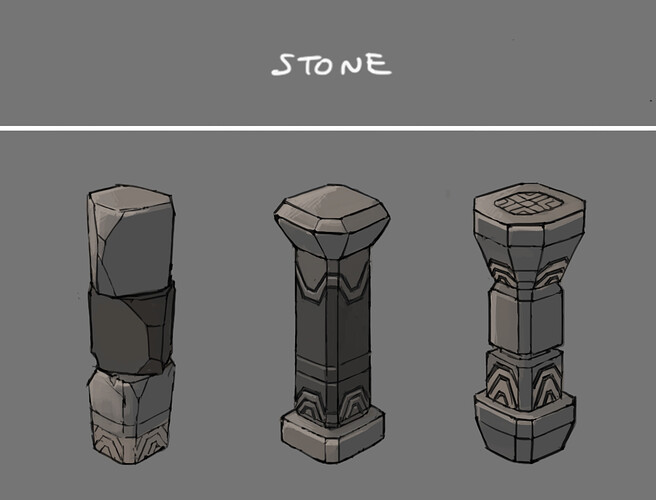 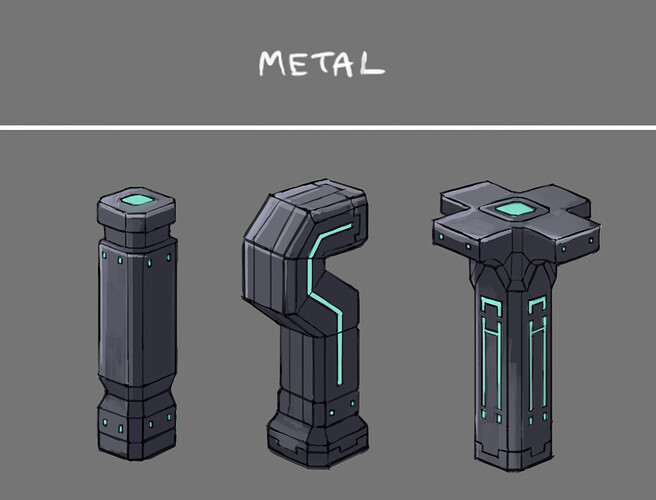 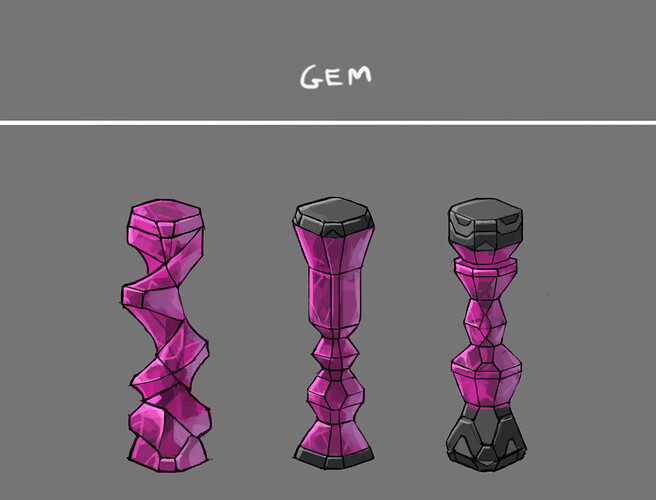 Rough composition on how all pieces might fit together (not entirely accurate to scale), note that clipping will occur for the pieces to intersect. These are just examples showing consistent theme, though themes can be mixed and matched for more combination: 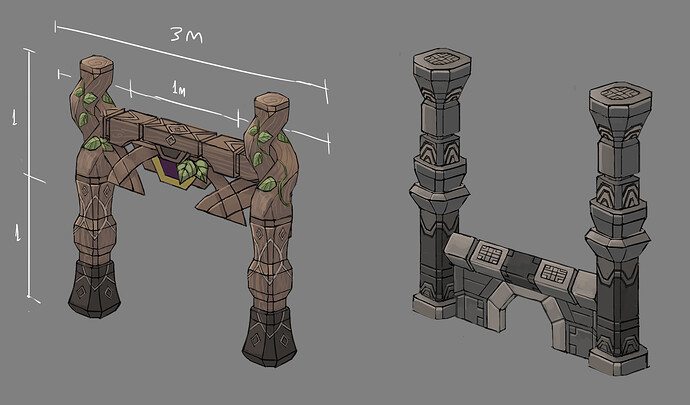 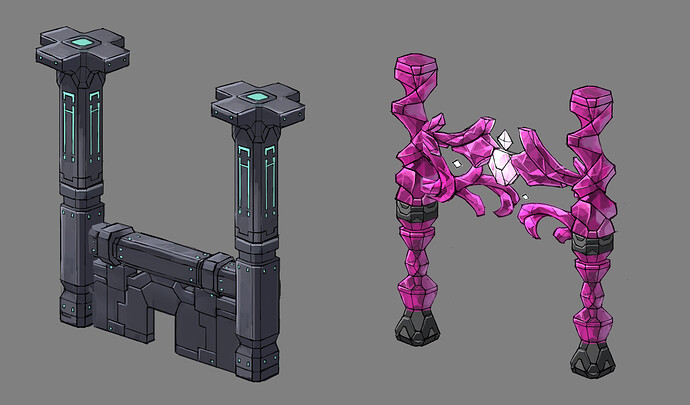 The idea for the decorative totem poles is that they would be rare craftable props, made by pieces dropped by the creature in question. They would act as trophies players could mount and show off. An example is that each separate piece of a creature part would take 1000 numbers of creatures to kill to gain an ingredient that would make either these decorative totem pieces or other related items. 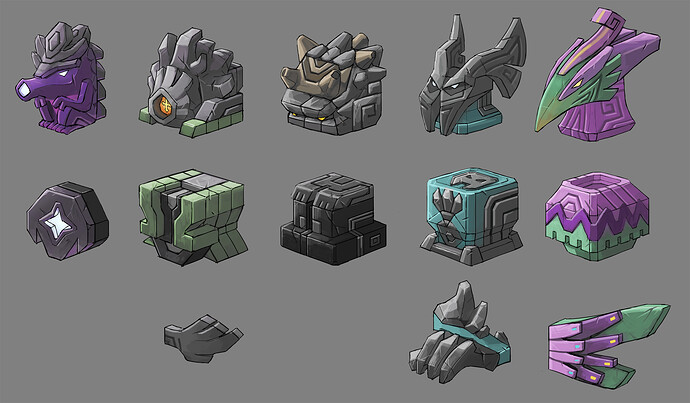 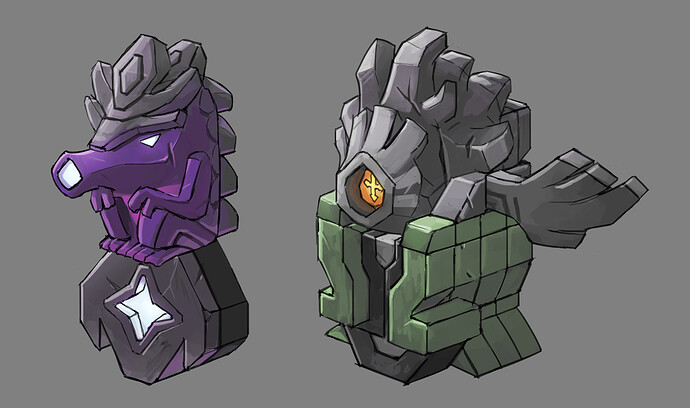 Essentially, these pieces can also be mixed and matched. 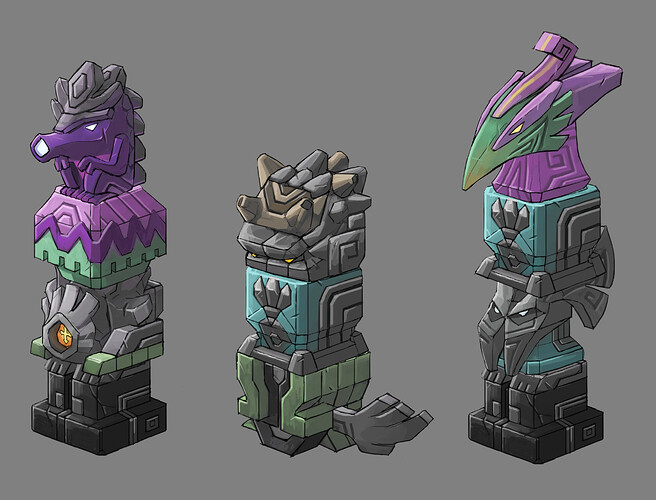 **Totem props will also aim to be tintable as well.

56 Likes
Beacon types?
Weekly Dev Update: 2017 June 23rd, 30th, July 7th, 14th - Progression, Polish and more!
We just need that!
In game trophies
The solution for all those empty plinths: Statues (with posing)
Idea for T7 x strike mobs
Which update will be a game-changer for you?
Decorative Pole Width/Thickness
Building Empty Buildings In Anticipation Of More Furniture!
Testing 212: Poles, Beams and Letter boxes!
Is there a Development Roadmap
Testing 212: Poles, Beams and Letter boxes!
Make decorative item from multiple itemparts
Make decorative item from multiple itemparts
Roadmap: Poles and Beams!
Georgegroeg's Dream Roadmap!
What if there was a city where you could get a pre-made house?
Alittle something for hunters [Idea]
Future of the game directed @James
A Few Ideas
Making harvesting dirt etc more rewarding
Wall Hangings
What would be a better rarity system? Discuss
Art: Decorative/Hanging/Unique Props and Beams! [BIG POST]
Decorations
Weekly Dev Update: 2017 October 6th to November 10th - 6 Weeks of Rage and Focus
Art: Decorative pole theme explorations!
Getting on the same page about the next release (date inside!)
In game trophies
Pseudonym84 July 14, 2017, 2:23pm #2

And some awesome Cuttletrunk statues to line the road leading to our Cuttlepunk Headquarters!

These are amazing! Definitely going to be a game changer with future builds. Those trophies totem poles and the individual pieces will make for fine decor! And is that a hunter totem??

And oh it is a hunter - I keep forgetting it’s not implemented in the game yet haha! It will eventually.
(It’s your turn to update on YT now!)

These look absolutely amazing. I am so looking forward to the decorative stuff being put into the game. It’s going to add a massive amount of additional diversity to buildings!

They all look insanely amazing but the gem poles look the best in my opinion. They really go along well with the techy aspect of the game. Can’t wait to decorate the beans out of my base with them.

It’s getting hard to categorize/name all this stuff! Regardless, I’ve uploaded this (and pretty much everything in Devlogs before that I haven’t commented on) to my online archive.

spent 3 hours of my life on that just now @dwarvenname

Didn’t even realize it’s gotten that big. There’s so much stuff posted by the devs though, and I think it’s pretty impressive so I’m glad I’ve been able to compile at least some of it in one place.

Great stuff @Minyi ! Please let us not choose what to implement. We want all of it smile

I never got how the horizontal fences are supposed to connect until today, when i took a really close look at the images.
Amazing concept! Can’t wait to watch @Jiivita telling us how they function ingame.

(Did i necro this on purpose? … Maybe.

(Did i necro this on purpose? … Maybe.

Naaah, even when … Necromancy is “never” a bad thing ^^ … And this feature needs some attention so that people fall in love with it again and the devs feel the preasure to release the d…n thingies asap