Why are there no exos again?

Probably waiting until the patch.

My preference is 2+ going at any one time. I’d also say no one is required to go, you can skip an exo, it’s okay! But I suck at hammering nails, so I can only thwack people who feel different with a pool noodle.

Yup only reason I have gleam from 3 or 4 of the last exos is because of @Ratchel. Only thing worthwhile on them was the gleam.

Always letting out the secret!!! 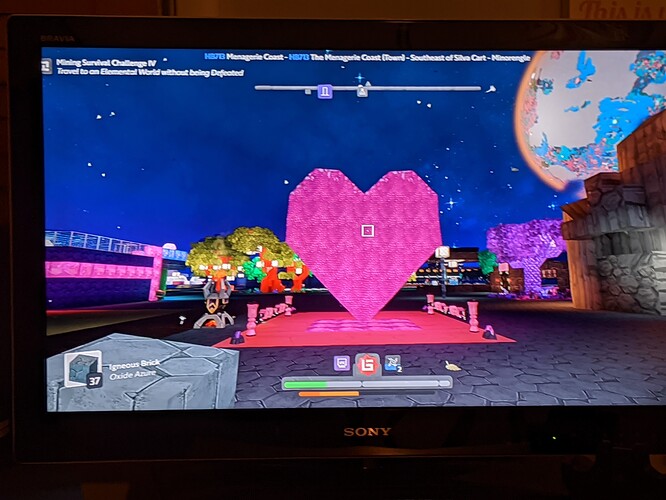 I would love another exo with Blink AND white rocks… Last few of them had cold berry, I mean, really???

There should always be at least one Exo if you ask me. It’s a key element of the game and only way to get certain things. As to the “rareness” of the Exo sure make that more exclusive

But it’s not unfortunately. Coding is not embedded to produce all of the colors yet from what I’m told. I do like the exos as a rarity but to be honest it’s not good for any casual player. As for James words himself “ I want a flat gaming experience” somewhere in those lines. Exos being that rare is not flat gameplay. It’s not fair to those who have to work if just one is released during the workweek. Running this game I imagine is hard work.

I understand many people would be upset to miss a EXO they really have been waiting for. I myself would be one of those people. I am only able to play a couple times a week. Most weeks work 7 days a week. I’m lucky to reach them most of the time. I still feel they occur to much. Rarity is something we just don’t have in the game. It’s something I feel has been missing since before the umbris planets came. When umbris was scarcely available it was amazing to even just get 9 on a hunt, when farming started exotic bulbs could only be obtained from the one T4 lush planet and they were sought after more then the most perfect forge, it was beautiful!

Sadly tho I’ve had that thought before, right when there was a drought. In fact it was with the previous release, which was almost two months ago, and after we kept complaining one exo popped. After the release it was back to a normal ish steady amount of two exo’s up at the same time.

What could be the case tho is that they had something big planned then, like the warp wraith, but it wasn’t ready yet hence the comment about PS4 not being able to get patches during the holidays and that they are now planning on releasing it now.

Oh I can agree some occur to much. It just needs to be modified perhaps moderated.

Keep in mind when wishing for exoworlds that it costs the company money to get a temporary server for the exo. The more exos they give us the more money they spend and less time for them to focus on future updates for the game.

More exos the better. If i can’t make it out to one, I can hire someone to gather or buy the exo goods. Beauty of an MMO. You can’t do it all (IE build that city, gather every color of every resource.) Trade is encouraged. I like the option of building and visiting exos at any time.

Constantly having 12 exo’s up isn’t particularly exciting or productive. Making them occasionally not be available develops more interest in them when they return. Overall a good thing IMO. I prefer them more frequently than once a month as a previous poster suggested, but there should certainly be times where no exo’s are available. That is part of the definition of “random”. I see no problem with this. Occasionally going a week or so without an exo certainly won’t kill anyone.

I feel the opposite.

Half of the exos already don’t have things I want - bad palette for my use, or wrong tier. Also they get mined out pretty quickly. When there’s one t7 per two weeks that’s pretty unfair to those who aren’t available within 12h of them popping. If there are five t7’s per month, more fair. Two to three exos at a time means I get at least one exo a week that I’m actually interested in.

Nobody is asking for 12 at once. However, I think the rate of 2-3 at once was a good rate.

Also, I think a more flat gaming experience is better. I quit monster hunter because of the trickling endgame monsters - where you could only get certain things at certain times. It ruined the endgame. Exos are really the main endgame activity in BL, so it seems a bad move to me to have it where you might go a week at a time unable to play endgame. If you happened to have off work that week, sucks to be you? That’s not cool.

If you can’t build because you MUST go to all exos, IMO that’s a “you problem”

No disrespect to those with different opinions.

going a week or so without an exo

Going a week or so without an exo = DK is playing games other than BL for that week or so. Which is fine, but I doubt this is the desired behavior the devs want to see in their users

I agree they should be at least a little special. One new exo every 2-3 days was special enough for me.

If people want to cut back on the frequency of exos i’m fine with that only if the algorithm is changed to give us new colors each time. Otherwise keep them coming.

Just let them come when they come…and to those who think once a month is enough…you do know u dont have to go to everyone. I have been to only 8 or 9 exo since their release. Maybe need start a group exo anonymous.

Just let them come when they come…and to those who think once a month is enough…you do know u dont have to go to everyone.

I know right!!! If you need to build then build, if you need to mine then mine, there is no requirement that players must visit every exo.