Before I get flamed, please understand I’m not here to downtalk the game at all. I’m merely stating that, which has negatively impacted my gaming experience over the last few months in a huge way; and what I now consider to be the main threat and reason as to why I will most likely not continue to playing this game in the future. Think this could also become a threat to the game’s health in the long run.

I was absolutely fond of the fact I could set out and explore regions of the world that were left untouched. The goal for me would be to eventually look for a beautiful location in the world to ‘carve’ into. Yes, I’m talking about digging into a mountain. 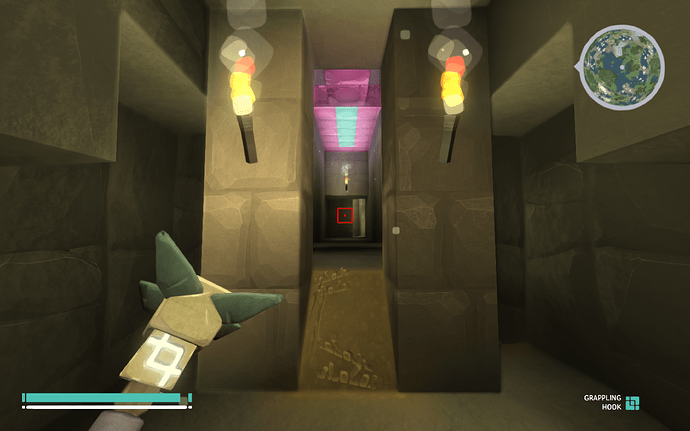 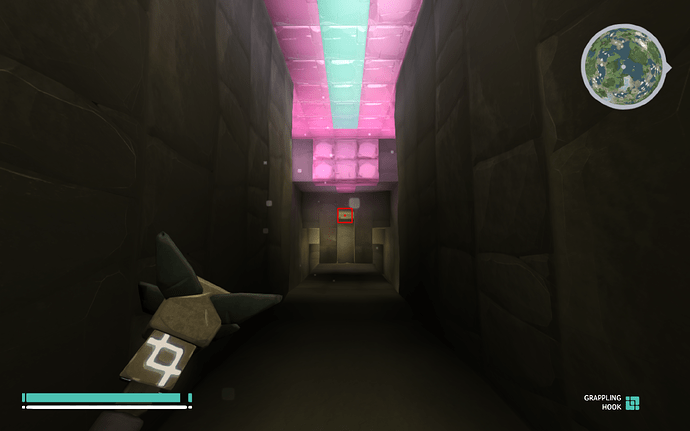 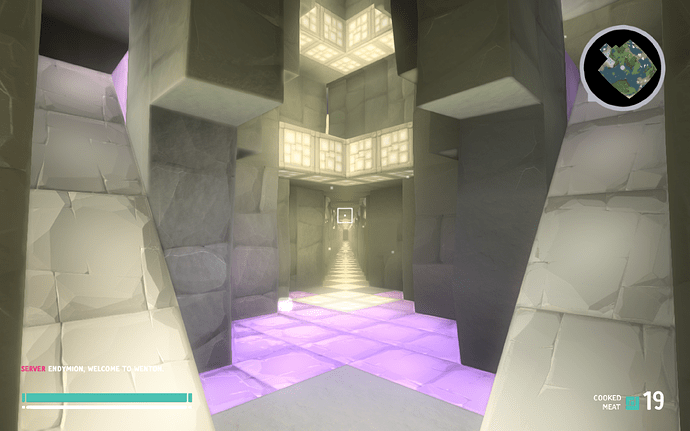 Another aspect that tickled my brain was the idea I would be able to work around the fact I would not require a beacon if I would masterfully hide my entries and exits in and out of the mountain. Imagine, running into a piece of the puzzle. Having found an oddly shaped tree or a little pile of gravel that stands out. 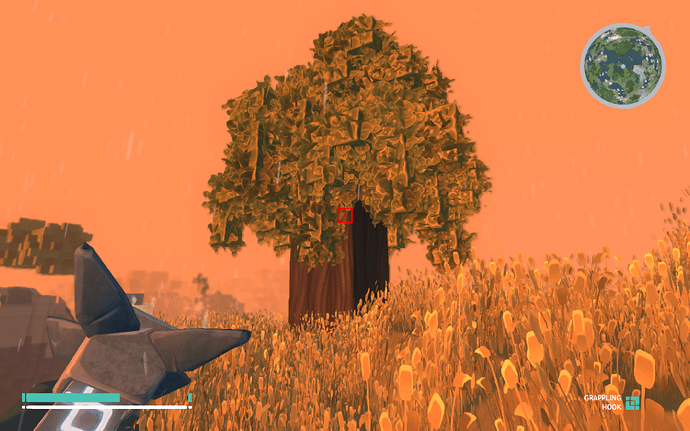 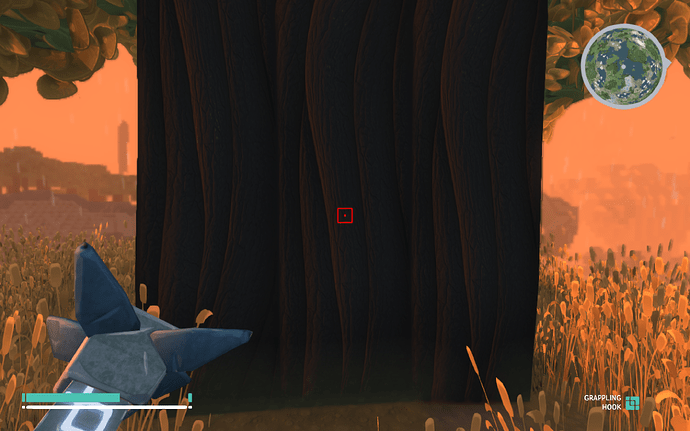 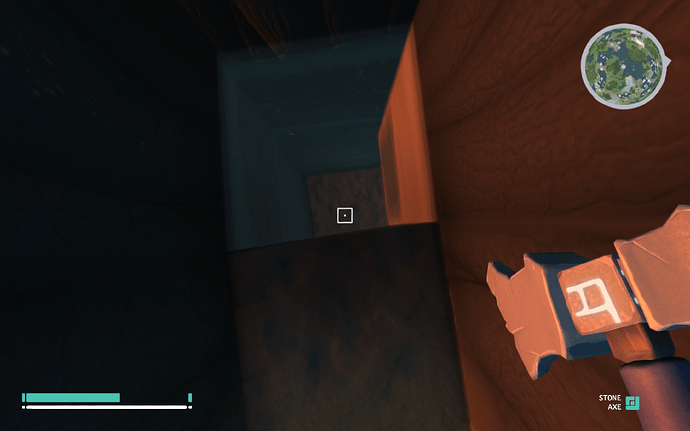 Oh, I would love to see the face of the person that would find my underground carved out halls with a giant throne room; 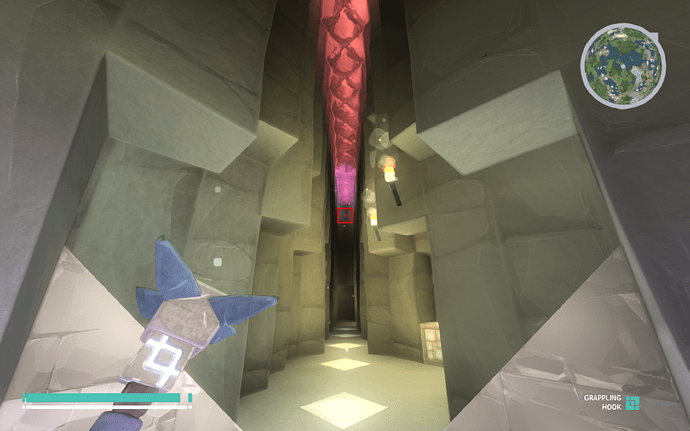 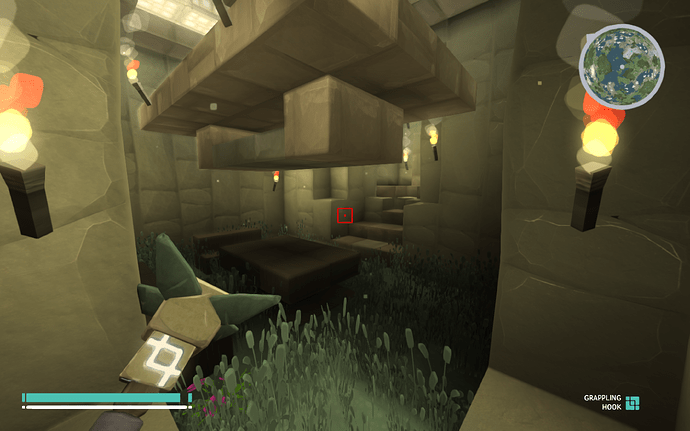 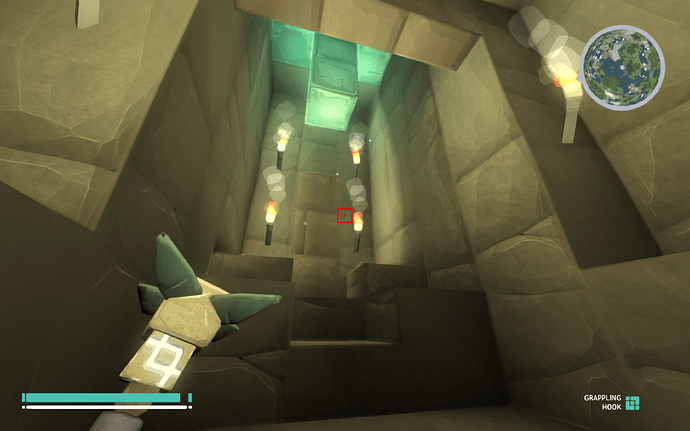 And (if I say so myself) cleverly ‘hidden’ storagerooms stocked to the brim with materials without using the new/‘normal’ and sadly disproportionate storage boxes. 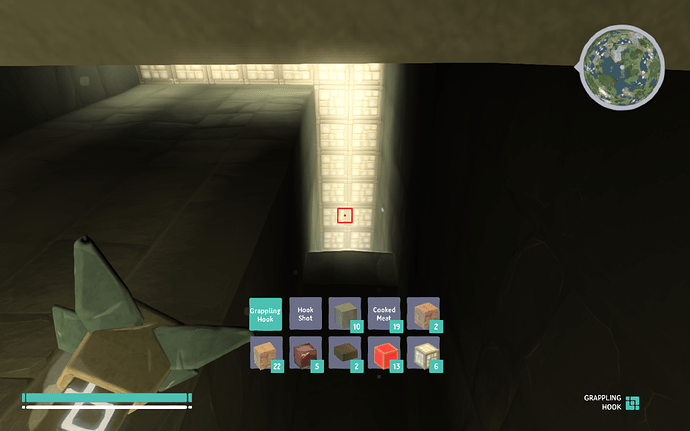 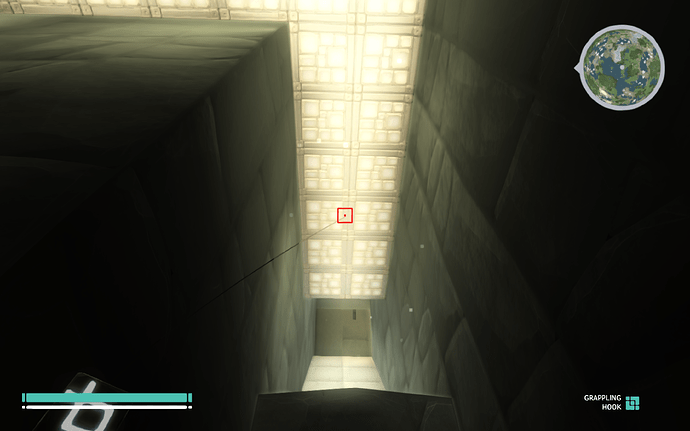 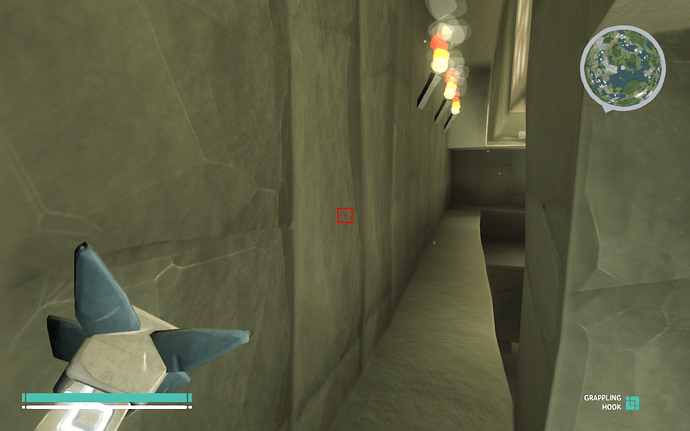 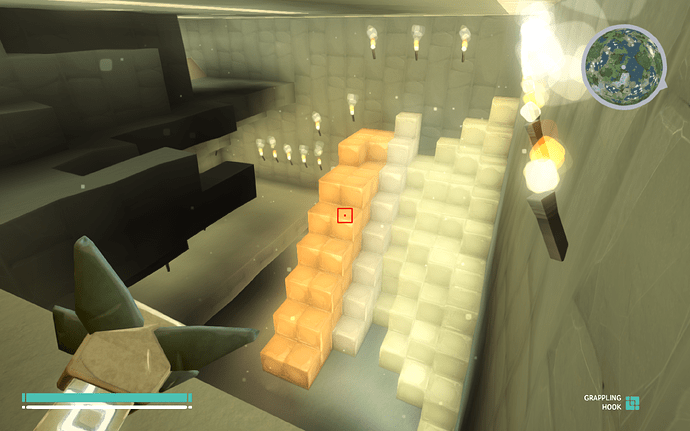 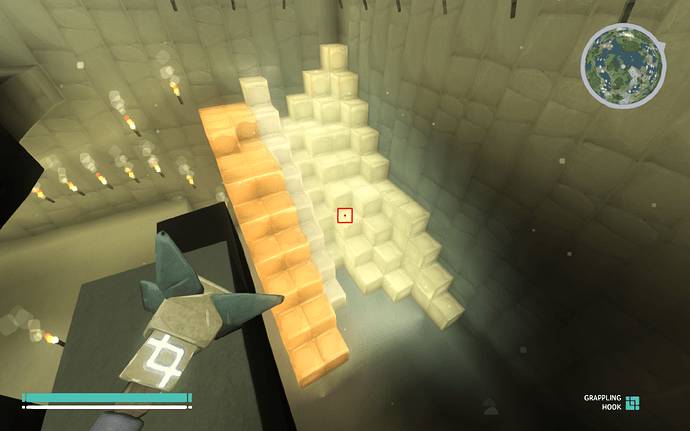 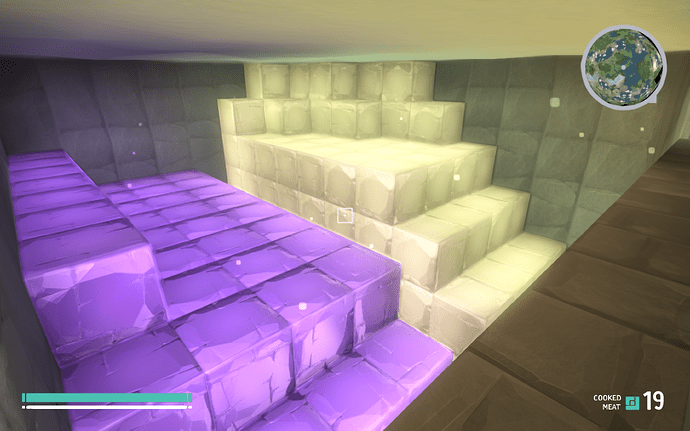 Now that the world ‘regenerates’ itself it’s become close to impossible to really achieve a masterpiece like this (in the ground) without a lame game mechanic like a beacon to protect it. Which I refuse to use for I don’t like the setup. By the way it’s like a big neon-sign for anyone to go and figure out what’s in the soil. Using one inside a mountain would basically mean you’re saying a multitude of things: “there’s something hidden inside this mountain, so come and see; Oh and by the way you can only look at it and not plunder, so there’s oddly enough, nothing to see here at the same time”. Now that’s paradoxical.

Having that server rewrite each dug up cube of stone you ‘carved out’ is just demotivating; removing rocks with a hammer (no not a pickaxe), hell even if it’d be a diamond laser guided missile (with a sense of navigation) would not cope with the speed at which the mountain ‘basically always is doomed to collapse’ in on itself. This fact made me and all of my mouse-buttons sweat.

For this accumulation of reasons, I would like to initiate a truce with several if not all of you bacon-huggers. Can we make my beloved Boundless work with wooden shaft-supports that could prevent world regeneration within a radius? That or something else that would save my perfect Boundless gaming experience as a whole. I understand that world regeneration is necessary, and I also understand there’s a huge bacon-community out there being a fan of their cubicle of ‘imprisonment’: but please understand that there are anarchistic freedom mongering architects (like me) out there that love the risk of losing it all and the routine of finding ‘another way’ within a ruleset.

Boundless is now Bounded and Finite // for me.

I’m not a fan of the current beacon system either. It’s way to restrictive.
The wooden support beams you talk about would basically be a beacon only against World regen right?
Which problem wouldn’t be solved with beacons you can toggle to: be seen/be completely invisible, be only against world regen/be against regen and players? (serious question because I think it would solve them all)

Also better shaping options for the beacons would go a huge way.

I like the idea of putting supports to stop regen in a tunnel, it just feels cool.

i agreed and understand what you mean. BUT

i rather play with the bacons than playing worlds like this.

beacons you can toggle to: be seen/be completely invisible

this was a good idea

The default really should be invisible beacons, showing your location should be an active choice.

At least it’s not going to be deleted for now.

I think the issue with names being shown on all beacons will become more apparent when you start having lots of people build in very close proximity to you.

I’d noticed it to some extent in this current release, in that you can barely turn around near the portal without seeing peoples names plastered everywhere - and that’s with only a few people who are fairly loosely grouped.

Having the ability to hide names would be good, either by the beacon owner themselves to hide from the world, or as an option for the player to toggle certain things… such as…

There’s probably quite a few others which would be beneficial too.

I think people are ignoring the fact that the current beacon system is basically the first pass, and has not been modified for a year now. With beacon controls, all of the things on OP’s wish list are possible, with the proper toggles. At present, beacons are a rushed job to cover people’s private builds from griefers that the player can place themselves. They aren’t intended for much else.

Stay tuned, beacon controls are probably just on the horizon.

2 Like you said, support pillars or beams that stop or severely slow regeneration.

3 Regeneration is necessary. It’s beyond annoying in games like mc to find an immortal half shack of sand and wood.

, it’s the reason why I stuffed all of the screenshots in a folder to remember this phase of the game developing. I love the new version for being much more prepared for becoming an awesome game.

Makes me feel really good to hear I’m not the only one hoping for improvements on this part of the game.
I’m a big fan of anything that could potentially improve our ‘freedom’ in the world to be able to allow, as many playing styles as possible. As @Havok40k described it this is indeed a first pass on anything beacon related.

With a flexible beacon concept like you described Havok, and with some beacon controls improvements, I’m pretty sure there’s a couple of cool solutions, which I’d love to be testing before anything else.

Still that involves just having a beacon again to remove 'other’s ability to destroy what’s built. I don’t mind having others destroy it, plunder it, loot it. I like that specific risk and the fact that I could give them a rather cool experience with my creations. Yes, it’s weird isn’t it?

It’s like those treasure maps you can find in ice cream: they make me anxious to grab a shovel and start digging somewhere. Indiana Jones style. Egyptians built pyramids with hidden clues both baffling and inspiring current modern society. If I could be an egyptian in this game I don’t need assets to protect from others. I’d love to have those supportbeams or indeed like @TrueGormagon 's idea: to have stones ‘regenerate’ a bit slower. Or whatever, somehow controlling the world regeneration within a radius for awhile and with a cost, would give me back that sensation.

Still that involves just having a beacon again to remove 'other’s ability to destroy what’s built. I don’t mind having others destroy it, plunder it, loot it. I like that specific risk and the fact that I could give them a rather cool experience with my creations. Yes, it’s weird isn’t it?

I feel with you, imo the absolute protection from beacons system removed a lot of suspense from the building and the game in general (I, for example, didn’t even bother with placing any walls, let alone doors since the implementation of beacons).

But it seems like this is just what beacons should do. Apparently beacons are intended to allow players to thoughtlessly slam their structures anywhere, without bothering to waste a thought on the position or safeness of their place.

TBH I also think that´s the reason why the worlds are empty.
Rust, for example, features basically the same amount of content (more or less) but it´s servers are bursting with players (Rank 13. in player numbers on steam!).

Though, in general, the beacon placing & handling is fine for me.

When we get more agressive creatures (and/or better AI) you surely want to think about how to fortify your buildings^^
Just slamming down things won’t protect you from angry mobs.

Constructs in Rust are also considerably more durable, and require a great deal more time and materials to breach than what is intended in Boundless.

Add to that, couldn’t “can destroy” also be a possible toggle for beacons? I have also built a few unbeaconed cache’s of treasure and artifacts in the legacy worlds for explorers to discover and plunder. It’s a fun little treat to leave behind. I see no reason why beacons could not have toggles to control every aspect of the area they encompass.

Add to that, couldn’t “can destroy” also be a possible toggle for beacons?

Maybe also “can destroy, but regenerates” - but I’m not sure how to avoid infinite resources via that

Add to that, couldn’t “can destroy” also be a possible toggle for beacons? I have also built a few unbeaconed cache’s of treasure and artifacts in the legacy worlds for explorers to discover and plunder. It’s a fun little treat to leave behind. I see no reason why beacons could not have toggles to control every aspect of the area they encompass.

How extremely smart of you! This could be an incredibly powerful feature. Adding an option to ‘remove’ something from a beneficial item to make it react to the variable it influences (i.e. world regeneration, player actions taken, (gravity maybe?) could very well be the way we should indeed think about this.

So I would need two specific options for this to work right?

Example Beacon options
Beacon Name: Pyramid of Chufu
Allow destruction: ON / OFF
Publicly visible: ON / OFF

That would be exactly what I suggested^^
I think that’s the best way to do it. Let the players choose how much they want the beacons to protect their areas.

I like the idea of beaconed items being able to be destroyed but regenerating exactly how the owner built them!

The alternative is that the world regen is bumped to something like 7 days (remember that regular visits delay the regen process), but users are able to report things to be regenerated quicker (something @james has suggested before).

Just slamming down things won’t protect you from angry mobs.

How do you know that future AI updates won´t include a rule that makes creatures respect the borders of beacons?

Constructs in Rust are also considerably more durable, and require a great deal more time and materials to breach than what is intended in Boundless.

Maybe also “can destroy, but regenerates” - but I’m not sure how to avoid infinite resources via that

Maybe include a rule that that prevents blocks from “dropping” anything if they are destroyed by someone without “legal” access to the beacon?
I think something like “can destroy, but regenerates” would be the best solution for this.

But even I (as PvP enthusiast) think that something like this should be exclusive to harder and/or PvP worlds (if they are meant to be).