In case you missed it, today is the Second Anniversary of Boundless’ Official release! So to celebrate our 2nd birthday, we wanted to give you the chance to win some prizes!

All you have to do to enter is to share your favourite Boundless memory with us! This could be about the friends you have made since playing, the time you finished an epic build or an impressive event you participated in!

??? What is this supposed to mean?

In Case You Missed It

My favorite boundless memory, besides being in voice chat with 5-15 friends everyday

My best memory, is Gleambow, and specifically the most recent since we can summon gleambow meteors, the amount of people who came and worked together to spawn t5-t6 meters for 4 days nonstop for multiple events, is my favorite event and thing to do now, and best and funnest memory with the largest groups, and everyone coming out with tons of gleambow blocks 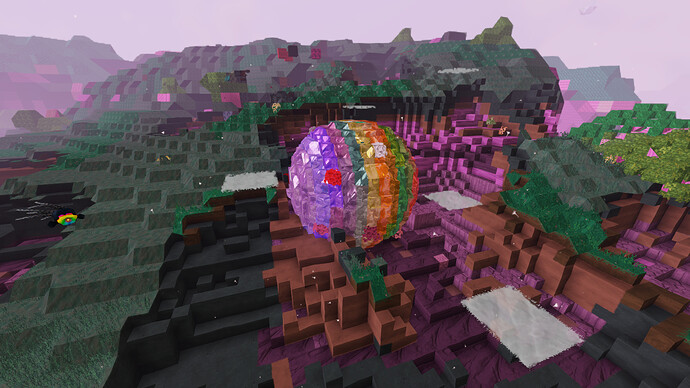 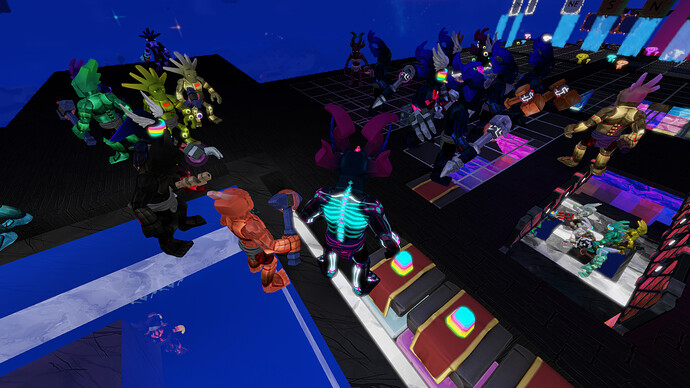 I have to say my most vivid memory is of the first gleambow event. It was a pretty high time getting all those new colors back before exos came out.

My favorite memory was back before launch when I spent hours trying to find tech components shortly after the loss of Lester (at the time components were extremely rare and was required to warp to a new planet. I was digging slowly and steadily under some desert when out of no where James showed up. We had a fun little chat for a bit and he gave me some gold to help me out since it was still pre-launch. It was awesome just seeing him in person and having a fun little one on one before he whisked away. 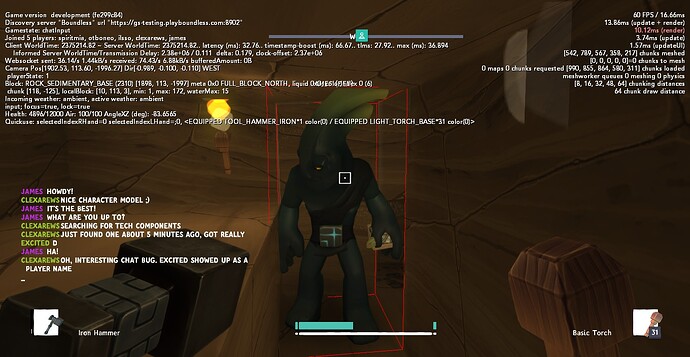 I also remember very clearly my first time through a warp to a new planet with a bunch of folks. It was a pretty magical moment and we were all very excited. 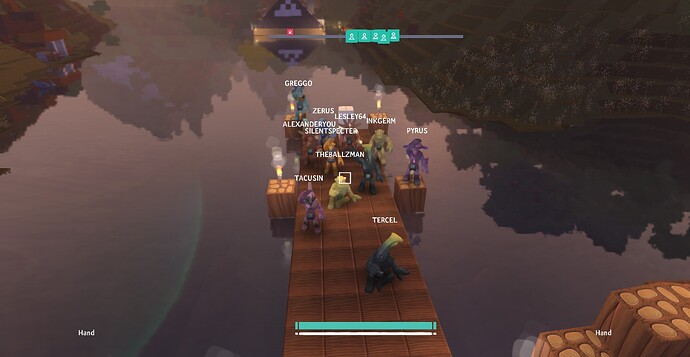 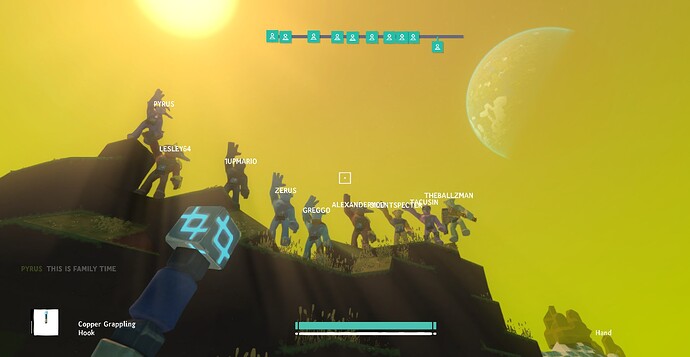 I have a few good memories of Boundless since I’ve been playing for almost a year now.

Those are great screengrabs! Makes me wish I’d been around during EA!

My favorite memories, in the month or two I’ve been here, are my first couple of meteor hunts when I realized that Boundless has a big, caring community (Beth even gave us noobs lootsticks!), and that those hunts could fulfil the zerg grind I want in this new world I’ve found. The second was when I realized that my wife is in love with the game too, and that we can enjoy the game and community together.

My favorite boundless memory is when my boyfriend built me a kissing booth and put a request basket in front of it with a sign that said “Kissing Booth - 10c”.

My fondest boundless memory is from EA so might not qualify but there was a time when building two flat portals at the same coordinates but at different elevations would cause hords of angry mobs to continually spawn in at high rates. For awhile the city of elop-portas was under 24/7 attack. The stakes were high as death penalty did damage to every tool in your inventory. Still this was some of the most fun (and lag) ever. There was always a brave crew of warriors and advencherers battling the hords right at the base of my house. So much fun!
I have shared it before but for anyone who missed it this is a grate Vidieo showcasing the mayhem. 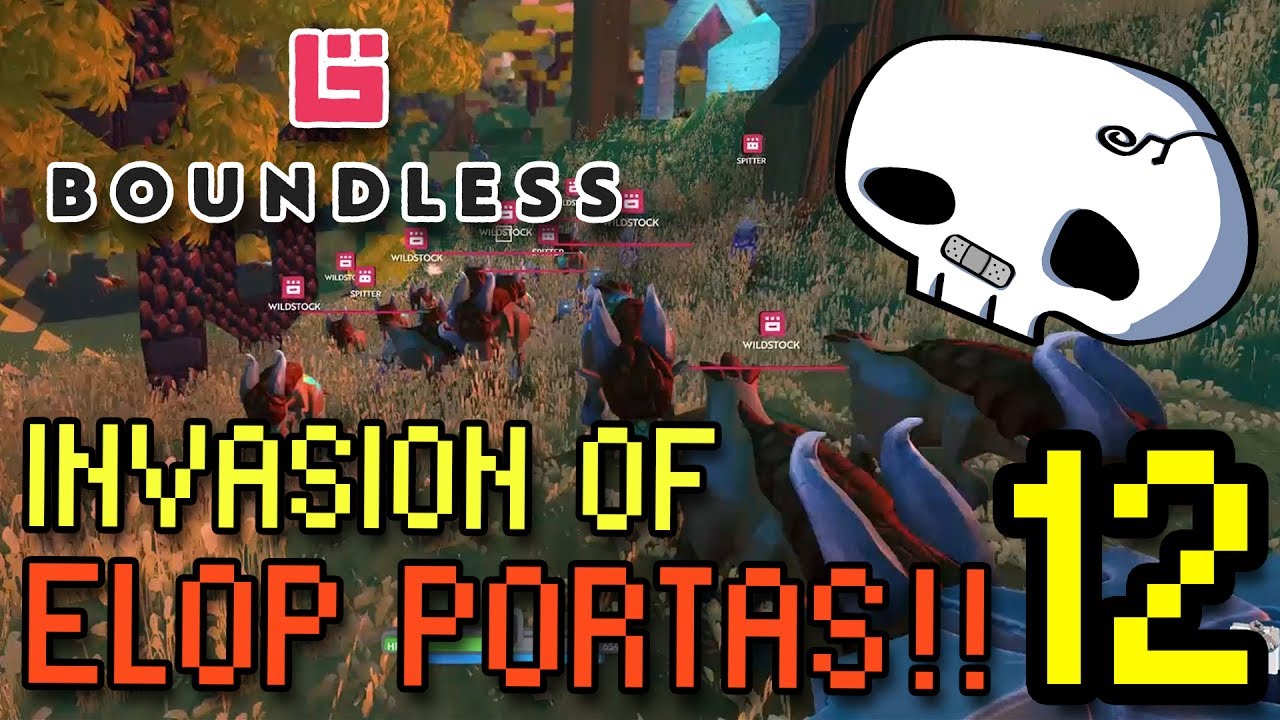 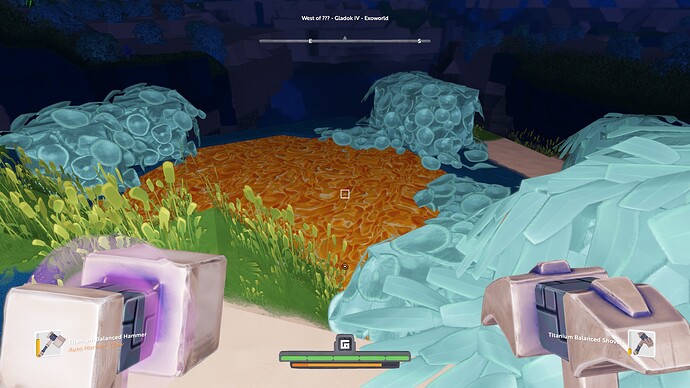 …with the friend who got me playing. I was SO excited to find goopy golden stuff and I thought I was going to be rich!! Then my hopes were dashed all at once when he told me that not only would I need something called a liquid breaker to get all this golden yummy goodness…but that it also wasn’t really worth that much…

Regardless!! My first exo was still exciting and got me maybe just a little addicted to exos…just a little though. 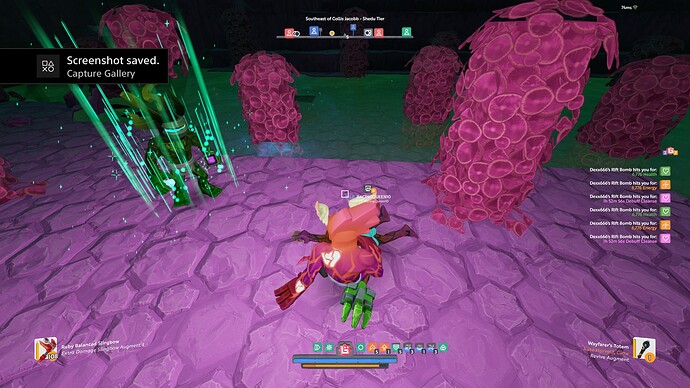 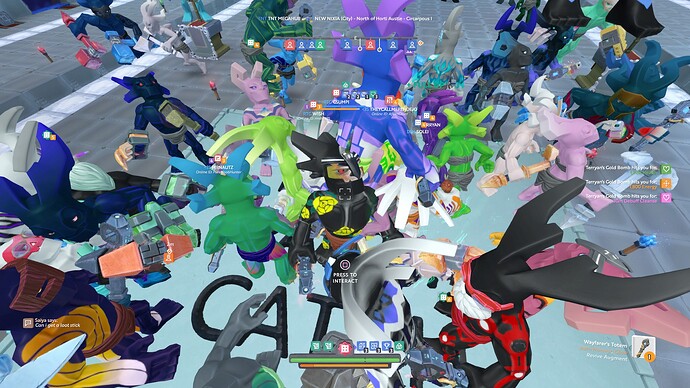 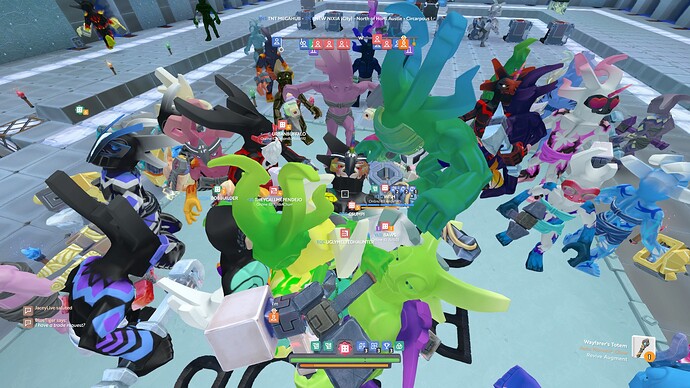 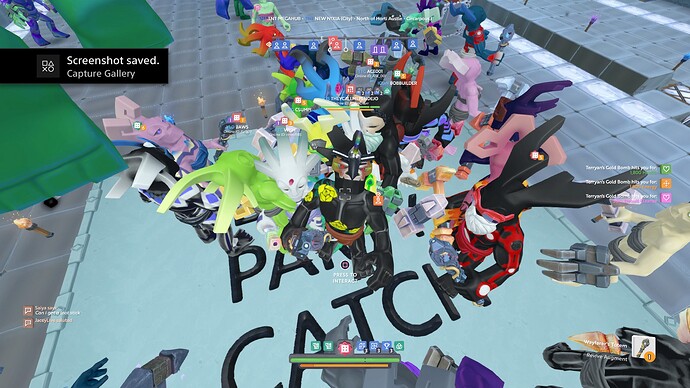 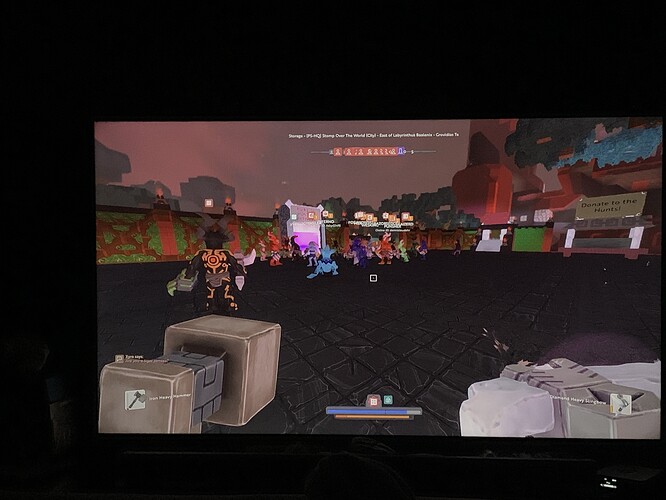 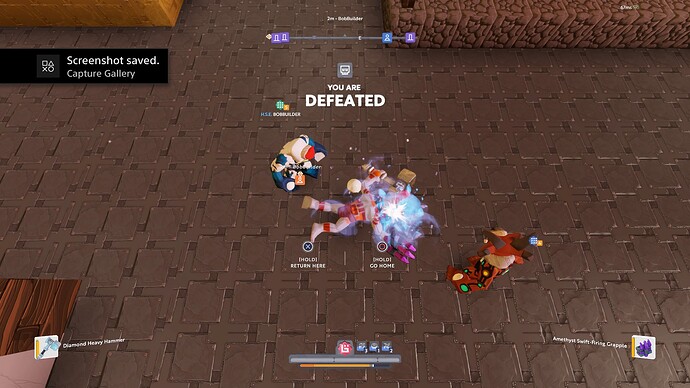 never did get paid for it)

Also that one time Boundless had Covid 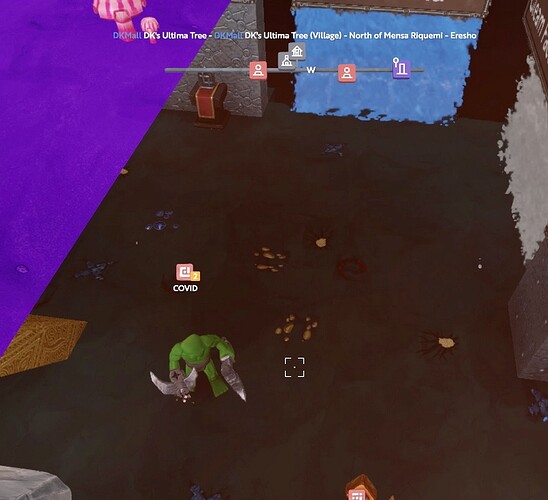 Wee hours of the morning, up with insomnia playing Boundless, doing something at the old base I had on Alder…

… Suddenly I get a simultaneous notification pop up about two players being defeated.

" says me to myself. Nobody around here! And this is Alder, not exactly dangerous territory. But, I’m standing right by my portal to the Reapers’ place, so go running through to see what is up.

I get through, and standing there by a picturesque pond, is the Dark Lord @georgegroeg himself, with a companion. And at the bottom of the pond - two dead citizens!

They notice me standing by taking in the scene there. “Ok self, think fast here. You don’t want them to do away with the witness too. So show them that you agree those two poor slobs had it coming!!”

So I quickly do a clap emote, turn and hightail it out of there. And live to see another day!!

(Sharing this memory will also explain all the corpses in the pond references I toss out. But joking aside, it really is the people here who have made the most special memories - some truly fine folks, so happy to be a part of this community!

My favorite memory(s) were both when the game was still Oort Online. 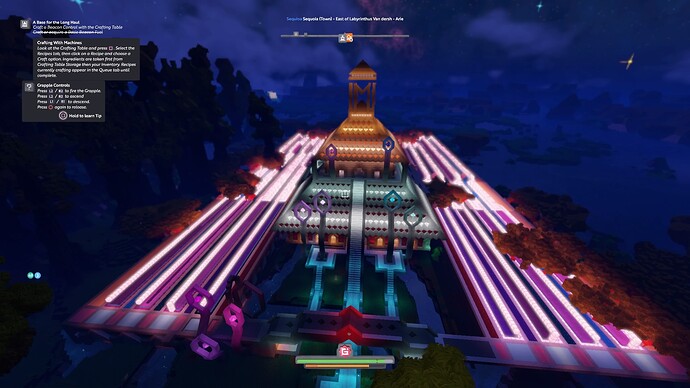 Current build a work in progress and ps4 does it no justice.

I think in the few short months that I’ve been around my favorite memory would have to be when I first started playing. I had no idea what I was doing, I had been wandering Tana for a couple of hours just taking in the sights and discovering how much this game truly had to offer. I stumbled across some portals that ended up taking me to the DK Mall which not knowing a lot about the game just astounded me, I remember being completely amazed at all the shops and portals that were there. I ended up taking the train to Lasaina where I met a lovely fellow that said hi to me. We chatted a little bit about how I was new and just exploring and I was so amazed at what they had done with the area. Finally as we were getting ready to part ways they threw some forged topaz tools my way to help ease my start. It was amazing to me that the first person I met was so willing to help and talk with me, it really gave me a good feeling about the game and its community.

I’m not much of a story teller but that’s it, the beginning of my descent down the rabbit hole that is Boundless.

P.S. Thanks, Jupiter, for the tools, you really made my life super easy starting out!

My favorite memory was back in the beginning of the game, going out and finding the most remote plot of land. Then I built a 3 floor with balconies, log hotel. Dug out a basement for block storage, then… built a huge block staircase to the sky and proceeded to get my glowing blocks together. In mid-air I placed the letters WASD Radio. Destroyed the staircase and made a stone walkway. Torches at the entrance. Last a shed just because. Had to be the most fun in a video game I ever had. I still have a pic of it on Steam. Good times.