Here’s a look at the basic in-game head’s up GUI.

The general philosophy is for the GUI to get out the way and let the player focus on the game world. We’re trying to minimise visual noise by presenting information contextually, only when you need it. 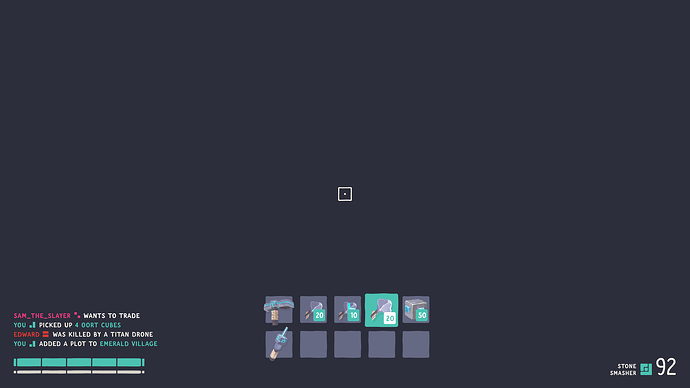 When your tool is selected, your toolbar will get out the way and let you focus on the game world: 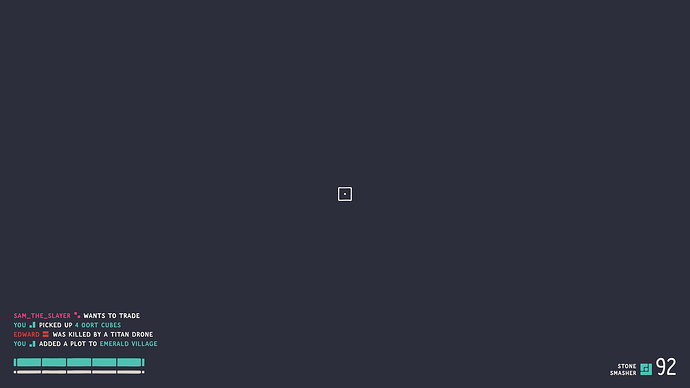 If you’re not taking damage, or there are no items in the event log, that GUI won’t be presented prominently either: 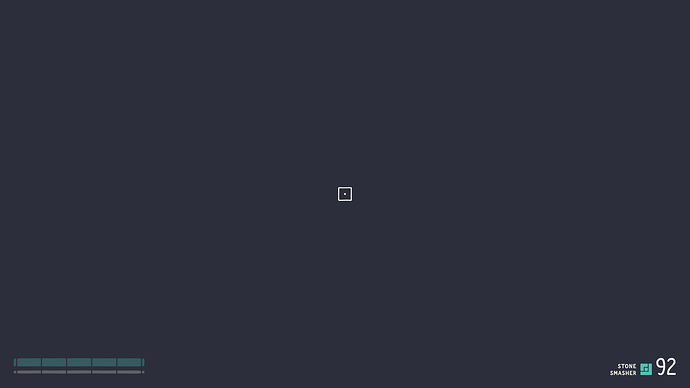 There’s still a fair amount of work to be done on the HUD and decisions to be made. For example: what about maps, 2-handed items, chat, world markers. Here’s an early look at how some of those things could be visualised (it’s unlikely you’d see all of this stuff at once). 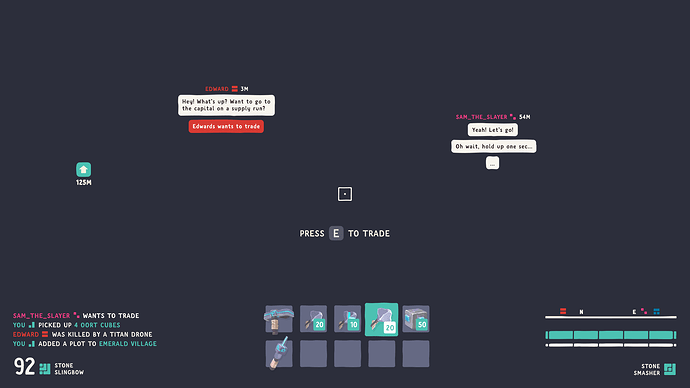 Not all of this functionality will come in the first release, but it is being designed together with simplicity in mind.

A few extra touches I’ve added in: the item you’re holding in your hand has it’s respective glyph displayed alongside. Players also will be represented using iconography built from the first letter of their name in the Oort alphabet, in a tint colour of their choice. This tint colour could extend as far as tinting the rest of the player’s GUI: 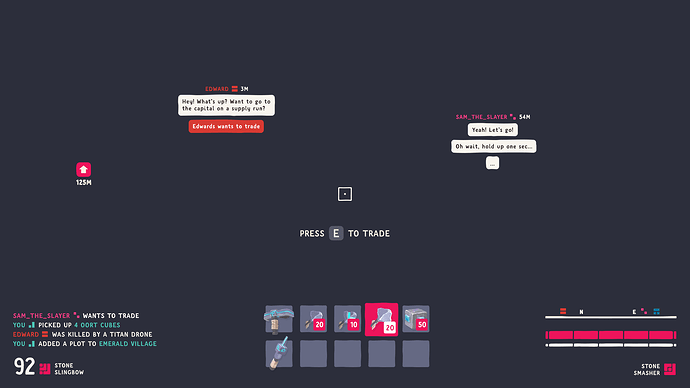 Thoughts and feedback welcome as always!

I really like the token tracking and mini compass feature you guys have on the HUD.

I really like it, it seems so neat, reminds me of BL HUD.

but what threw me off is the ‘‘Edward was killed by a titan Drone’’ which i want to know what is o.o

also the symbols of the right what do they symbolize? or you know, the oort letters.

also the symbols of the right what do they symbolize? or you know, the oort letters.

Player locations on the compass

Yeah but in the chat, is it just a way to distinguish players? do they automatically generate depending on how many are around or is it something the players themself choose? (which glyph they want next to their name)

Short answer: we don’t know yet. Details like that are still very much what we need to work out.

Alright, fair enough, it just seemed very deliberate so i was curious if it was a feature you guys were trying to sneak in

In this design: the glyph is based off the player’s first letter (for consistency), the colour is chosen by the player from a palette.

i really do love it though, it springs a quote to mind from the ESO director before the game came out. ‘‘We want people to play the game not play the HUD’’ so i am all for simplicity in terms of HUD and GUI

General point with the glyphs: we want to present a simple GUI that feel’s like it’s part of the Oort universe, without it feeling forced or over embellished (for example: celtic knots and guff like that). The glyphs provide meaningful embellishment that strengthen the thematic ties to the game whilst also provide something cool to look at.

Looks good, but I have one question. Do you have a tendency on how far chat reaches? Or is that a thing you have to discuss further?

Do you have a tendency on how far chat reaches?

Chat will almost certainly be a local thing (probably not much different to how it is now). We’ll connect players when they’re playing together in person, and services like Steam, Teamspeak, this forum etc can fill in the gaps in terms of providing more comprehensive chat and voice functionality.

Sounds good to me^^ How far does the chat actually reach at the moment?

Love the simplified minimap/compass on the bottom right, reminds me a bit of the one in ESO (where it worked great).
Speaking of ESO: If ‘E’ is reserved for trading how do you perform other social interactions like starting a chat, inviting to your party or duel? I think a “social interaction wheel” like in ESO would come quite handy here.

You played too much munchkin

TWO HANDED SWORD!!! HE ALLOWS YOU TO HAVE 2 MORE HANDS!! XDDD
http://www.google.es/imgres?imgurl=http://cfs5.tistory.com/upload_control/download.blog%3Ffhandle%3DYmxvZzE1NjE5M0BmczUudGlzdG9yeS5jb206L2F0dGFjaC8wLzEwMDAwMDAwMDA2Mi5qcGc%253D&imgrefurl=http://forum.multitool.org/index.php?topic%3D48978.0&h=252&w=156&tbnid=k54LVJWHlJ2Y0M:&docid=HCAViPX-qa9U-M&ei=c2-7Vdz3D8L9Uo7xgYgD&tbm=isch&ved=0CCAQMygAMABqFQoTCJz94cq0hccCFcK-FAodjngAMQ

Never heard of that game but that card is amazing! xD

Those last 2 shots make the UI look very cluttered, but I have to admit, that’s nothing compared to other MMO’s. Great work! Do you think you could photoshop in a screenshot of the game so one could see what it would look like fully in-game?