here you can have a look at the first concept exploration for the Containers.
We deliberately decided to don’t call them chest because their gameplay function is not clear yet.
In that first pass i explored simple shapes and basic crafting material like wood, stone and metals.
I’m not going to describe them to you because i would love to see your take on them and see what is your first impressions.
More concepts to come and 3D meshes on their way 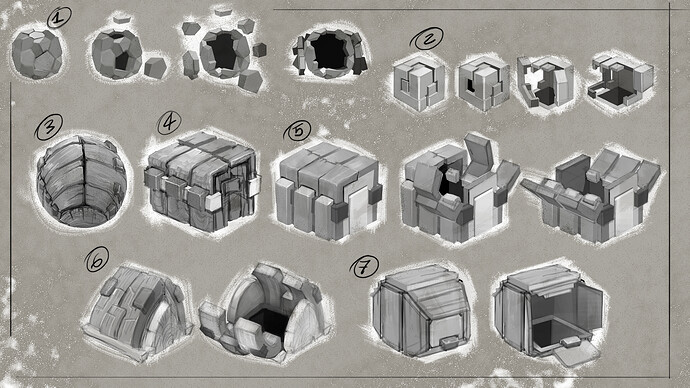 See you soon and stay tuned

1 and 3 will be good, not only hidden containers, but beds XD or treasu/monster boxes XD

The stone or clay container looks very mystical to me. I imagine cracking them up could be a pleasure. The second one is super awesome - combined with a sandy rock grinding sound, very striking for sure. Most of all: Maybe they should not be activated by only clicking on the container item, but also by finding the right trigger, spot, or button.

what size are 1 and 2? i would say they look like something you can have an open in your hand which is kinda epic.

they are nice, but they look a little bit too sci fi for my perosnal taste

They’re not Sci-Fi at all. First is a fossil. The second a magi-mechanical device.

i just love the idea of making them look like actual chests. so im kinda biased i guess

I don’t wanna babble the blood out of your ears how aweseome I think Nr. 2 is.
But see the little square in the middle of one side? That could be the secret button for opening it.

Looks like we’ll have a variety of loot containers a la borderlands, and a few craftable storage containers for personal use. Excellent!

I like 1, 2 and 3 a lot.
as you said gameplay functions aren’t clear if we look at concept 6 or 3 its diffrent to something like 1 or 2 imo it looks more like will be connected to some tunnel. where 1 and 2 are some box/chest/contaier and 1 and 2 look more magical than 3 or 6

All are excellent. Keep up the great work!

1 looks like something I may randomly come across while exploring a mountain or cave, it looks like a rock and i’m just smashing it open. 2 looks very relic like, maybe it contains ancient Oort materials, nothing too special though because it looks common even though its a relic. 3 is a… thing, maybe I broke a tree and found something curious inside. 4 looks like something I would walk inside, a good place to hang up some tools. 5 looks like 4 except its either really small by comparison, because it opens from the top or it’s launching a missile. 6 looks like a convenient average storage container. 7 is where my robot suit lives.

They all look gorgeous !!!

I absolutely love 6!
1 could be cool for loot (but not an actual storage container)

i just love the idea of making them look like actual chests. so im kinda biased i guess

we’re being careful to make sure we call them ‘containers’ to try get some original, but still readable. We’ll give them a better name than container for the actual game though :

I spent 10 minutes trying to come up with a cool name for storage containers and the best thing I came up with was Chessel (Vessel + Chest)… AND THEN I remembered you guys are incredible at coming up with names for things and I should just leave it to you! (Gleam is perfect for crystals!)

2 would be something you’d find in an Oort temple

6 and 7 only look kind of sci-fi in the open state. But that could come from the angle.

And the lore could well be “post apocalyptic” in the sense of post Oort which had an apocalyptic fate.

Aw man these are lovely, looking at the bottom two for a brief moment I thought they were hidden doors of some sort before I recalled reading the title Containers.
These look really cool. It looks like some of them (such as the cube) would be interesting if used as a sort of Hidden container since if it was big enough you could put it in a wall and build around it, if it blended in that is. Anyhoo, love the concepts, the different shapes are really nice, it’ll help kind of break up the blocks if you use some of them in a home.
Very cool.

Important question: can I climb inside them?