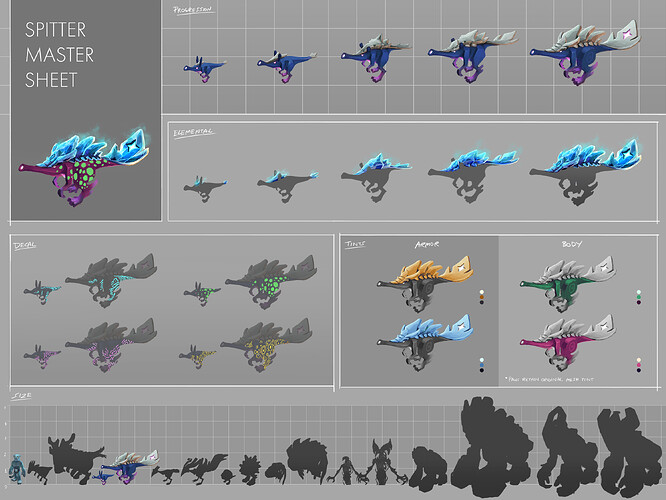 The Spitter is a common, ranged attack creature found on many worlds particularly the lower threat ones. One of it’s key indentity traits is that it never walks but instead runs around the world from place to place. It’s personality resembles an cautious but also aggressive armadillo scurrying around and dodging to avoid being hit back. When in an agitated state they shoot projectiles at nearby enemies, and strafe around their target. They can be often found alone or in groups.

Today, this post will focus on our visual approach to creature progression and in particular why we think the Wildstock is better suited towards a ‘Species Progression’ and why the Spitter adopts a more conventional ‘Classic Progression’.

This will hopefully explain the deciding factors on how the art team creates the visual progression a creature will have, which closely ties the aesthetics into it’s identity, behaviour and gameplay functionality.

So in a ‘nutshell’, any one of our creatures can have up to 5 tiers of visual mesh change to represent it’s ‘Difficulty’ and ‘Power’ in the gameplay design.

For example:
A peaceful easy-going world will have more creatures suited to that game play environment. Alternatively a more challenging combat environment may sport the more powerful and difficult creatures.

After a lot of visual exploration, we identified two clear categories that our family of Boundless creatures can relate and be placed into. We labelled these as Species Progression and Classic Progression.

The Wildstock is a perfect example to why a Species Progression was needed visually for the best considered artistic approach.

So we needed to represent the 5 visual tiers of ‘Power/Difficulty’ in gameplay whilst still maintaining the same rig\ai and animations. Done in the Classic Progression way, you would end up with just so many, many, many ‘goat-like-creatures’ and since this creature is found in large groups\herds and has random behaviour we had to consider another visual approach of achieving what we needed.

For the Wildstock we felt that the herds should look like they are part of the same family - like a pack of Lions, Zebras or Elephants. By having each tier looking like a unique species, this also allows us future scope to have unlimited tiers if we so choose to make more Wildstock later down the line.

The gameplay for this creature is key here because IN this herd of creatures part of the joy is that any random creature may react more aggressively than the others! This behaviour resembles and connects to it’s nature in reality… for example what would happen if you attack a herd of Moose, Cattle or Gazelles?

As ambient creatures with reactive behaviours that are utterly random - part of the surprise will be when one of the pack reacts in a more angry fashion than the others…same for those running scared.

This visual approach according to the above example is particularly appealing when considering what a level 1 Wildstock may look like in comparison with the most aggressive level 5 in terms of the gameplay. Our visual concepts and design reflect the behaviours of ‘most vulnerable and therefore weakest’ to the ‘most aggressive and therefore dangerous’.

The Spitter we feel is definitely suited toward the Classic Progression, deriving from being a ranged creature with a strong string of solo behaviours as part of the AI.

Our level 1 Spitter clearly visually shows it’s the weakest in terms of power and level 5 is the strongest and therefore has the fiercest combat.

Incidentally, that’s not to say we can’t have another species of Spitter later on… but that new species will also have similar tiers of strength to represent it’s gameplay in the conventional way and to keep the game consistent.

As I mentioned before, we aim to create a visual common language for all the creature of Boundless.

We feel overall, that both Species and Classic progression visibly show ‘power and difficulty’ in gameplay clearly while being sensitive to it’s identity/personality and behaviour.

The split between species progression and classic progression seems like a good approach!

One thing I’m a little confused about though is how herds of a particular creature type imply species progression? I mean, yes, it makes tons of sense for all creatures in the herd to look and act similarly. But, couldn’t that also apply to a herd of creatures following a classic progression too? (I think I’m just missing something)

Also, on classic progression - it seems like higher tier creatures will largely reuse the same AI & abilities, but “just” have better stats (and look stronger)?

Hi nevir,
i’m glad you like the progression for the spitter.

That is what our decal system is going to introduce. Gerry is going to talk in depth about that in the future post (The Hunter). So, stay tuned

So in answer to the first bit…you are right, they could have a classic progression approach but then we felt it would be visually confusing if the weakest one attacked in a more aggressive fashion than the biggest. Part of the gameplay to the Wildstock as ambient generally peaceful large groups - is that any one can act in a more aggressive way than the others. Maybe if we did classic progression also then that result may be a bit funny? You know, maybe it would be a good thing - I can see some fun scenarios?

In any case, we also plan on making more variety in scale (wee goat?) and speed of animations to add variety in the herd (so the move together more naturally and not robotically). We can find out then if the smaller goat attacking viciously works out to be a charming addition.

Whether that needs another mesh…we not to convinced but perhaps as an addition later on if we think it really need it? We can certainly discuss the merits of this as a larger interested group here on the forum. Species progression does allows us to be actually a wee more more creative for visual difference tho above all else… for example I’d rather see lots of world species than create the goat universe (as cool as that may be).

As for the next section of discussion:

Absolutely! Progression to higher tiers on the Classic Progression would get something hopefully similar to what you describe.

(e.g. tier 1 spitter can just spit, tier 3 gets a spray, and tier 5 calls forth spittle from the heavens)

That level of ai/programming detail is still in very early days (it will factor in performance) but yes - we hope to have variety on that front and we’re providing the visual vessel in art to allow a deep correlation between the two (four including design and animation of course!).

On the Ground Basher, we hope that more terrain can be destroyed and patterned in the higher tiers eg. like a singular line of destruction up to more spread out radial patterns.

As Claudio mentioned - Decals will also create an addition variety of behaviour effects which is still early in design. I will explain more (lol - in depth) in the Hunter post section on specifically the Exoticness/Decal treatment.

Till then and thanks again.

Awesome! You’ve covered your bases here - the more I hear, the more excited I get

Can’t wait to see these in game!

I feel like step 3 to 4 is visually very decent. Guess if I see them wildlife, not mixed up with each other. I could never say if I meet tier 3 or 4. Maybe when I am more veteran player or on some special moving behaviour. The differences in wildstock are far greater in this case. Anyhow i like the work.