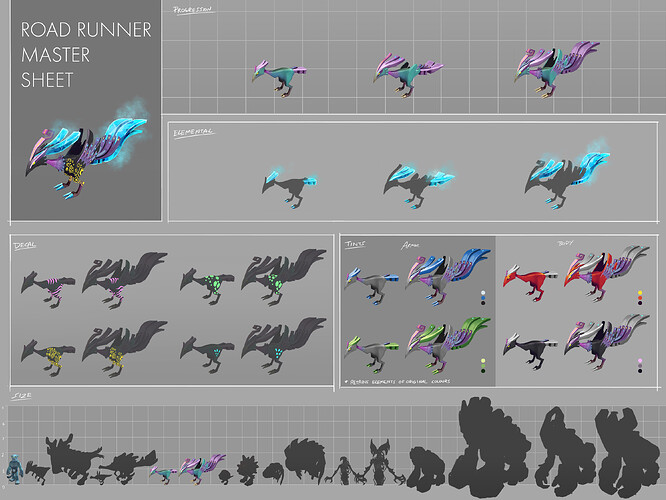 The Road Runner can be found on many worlds, but is a rare and skittish creature. He is a flamboyant cocky bird who runs away at the first sight of danger and is always alone. When idle they wander and peck at the floor, but when they become aware of any player they will run away as quickly as possible. Most of the time the player will have only a small opportunity to kill them and get their valuable drops. Very rare variants will charge at the player and may hit them before running away.

So you wouldn’t be alone to initially think that creature progression of any sort visually speaking would result in ‘bigger + more armour = badder’ (the most difficult version of that creature). And in the traditional sense that is true… however in Boundless, we’re striving to make more than a full set of creatures that can be killed only by means of melee or ranged combat. (More on melee, ranged and armour in later posts)

The Roadrunner is a perfect example of this, where the most difficult progressional form of this creature makes no visual sense have the fastest escaping creature to be the biggest or have more armour. It is however a unique Solo Behaviour based creature therefore Classic Progression is applied - but unlike the Spitter there’s only so many ways to run away quicker therefore only 3 tiers are needed in this case for the gameplay specifics.

Progression therefore for the Roadrunner (and Wildstock) takes it’s a lot of it’s visual aesthetics primarily from it’s Speciality category at the top of the ‘Key Visual Features’. From these, the visual aesthetics lean either towards their nature (what they are) or their combat (what they do).

In the case of our Roadrunner - like a Peacock or a Swan - the ‘best and most difficult’ classic progression levels results in ‘Flamboyancy’ rather than ‘Armour’.

Flamboyancy also takes into account that his main identity and personality (animation sets) which has traits of being a bit of a ‘show-boater’ as he struts around the landscape, almost teasing the player to try and catch him. (Without Amour/Protection - he is likely to go down like a bag of spanners… but our Road Runner is so very sure of himself!)

Get inspired by Trump

Most of the time the player will have only a small opportunity to kill them and get their valuable drops.

Well, now I just wanna keep one in a zoo! Although Im sure the Roadrunners loot is worth killing it for, I think at a later stage of the game, actually catching one would be a cool and awesome challenge!

One of my favs of the creatures yet

Did you think about taming? Putting a rope on and sliding on the ice trail?

damn, that feature would stand out so much. Not representative in any other game i know