This week we’ve been working on adding threat behaviours and animations to all the creatures we have. Get too close in proximity and the creatures are likely to react to you!

As each creature in Boundless can have different characteristics and personality, this behaviour changes slightly per creature type… but I’ll go through them all individually below in more detail.

Ok let’s start here. So the Wildstock is generally reactive and turns aggressive on provocation. In a herd not all of them will react with aggressive behaviour so only a portion of them get annoyed when you get too close. (The others don’t bat an eyelid!

Here in this anim, the threat behaviour of the Wildstock is shown by stamping and scraping his hooves before he’s triggered into the charge attack.

The Spitters are a lot more aggressive by nature in general - how many of you have been blasted out of nowhere by a projectile??

Get too close and he’ll clearly warn you by rolling and shaking his tail like a rattlesnake. When we have a sound effect pass you should be able to hear that you’ve come across a bad tempered Spitter before he starts firing.

Ah the Roadrunner… well he’s just not aggressive at all! That’s not to say we can’t exhibit a reaction on proximity on the basis of his very cowardly personality.

Instead, get too close and some road runner’s get very nervous indeed. Like most panicking birds, it’s not going to take much in this state to make a bolt for it at any time!

Like the Wildstock perhaps not every bird has the same amount of this bad reaction - perhaps some will simply flee and others may quake in their boots for longer.

We’re now onto one of our grumpiest residents. The Hopper exhibits his threat display by shaking like a porcupine and swaying from side to side. He’s in a pretty bad mood to start with and getting increasingly volatile by you being in his personal space.

The Cuttletrunk is a very dangerous creature and like the Spitter, gives fair warning on the pending attack!

The Hunter will not warn you when he’s stalking you like prey… that would give the game away right??

Instead, if you find the Hunter whilst they are in a passive state (in the air patrolling and ethereally flying around) and trespass in their personal space… they can be aware of your presence.

Playing the threat animation here indicates a certain intelligence above the other creatures. The Hunter is aware you are here… it’s just choosing not to attack you (just yet). Perhaps he’s a decoy and another is stalking you from behind…???

In any case, attack him at your peril.

Finally the Ground Basher, which is generally at the other end of the intelligence spectrum is very straight forward when displaying that he’s ramping up the agressivity!

Thumping his chest - this guy’s ready for battle. (This is the old mesh and texture btw)

It’s been a bit of a milestone week for a number of reasons as I’ve been wrapping up the anims for version 1.0 so I can go on maternity leave with piece of mind.

I’ll still be around and will of course be back before you all know it. I’ve absolutely loved doing the animations of

and look forward to seeing more of the trailer animations make it into the game.

You’ll find in the weeks to come that the first person tools all have had a camera and animation pass - implementation is getting done as we speak. The creature’s above all have a fully animated set to put into the game and are due to be rolled out as each feature comes to pass. We’re also working on implementing bombs and throwing animations for the playable character… so watch this space!

but also hoping hunters are vulnerable to lava.

so I can go on maternity leave with piece of mind

Have a good one! And nice animations

These look so good! Very impressed. I love the display of intelligence by the hunter too(:
Keep up the amazing work and enjoy your maternity leave knowing you left us all very happy indeed;)

The Spitters are a lot more aggressive by nature in general

How many of you have been blasted out of nowhere by a projectile?

You should be able to hear that you’ve come across a bad tempered Spitter before he starts firing.

Aren’t all of the little bastards bad tempered? I’ve yet to come across a cute and friendly one.

Jokes aside, these updates are awesome. I love that you guys keep the community up to date on all your work and developments. These animations have me stoked!

I want a cute and friendly one. Cuz then I want it to go on a killing spree against its brethren cuz I raised it to have Stockholm syndrome and sympathise with me for the rest of eternity. Just murdering sputters and cuttletrunks

I adore how Hunter warns you, “no, no

I adore how Hunter warns you, "no, no

These all look so awesome!

why is the link blurred??? 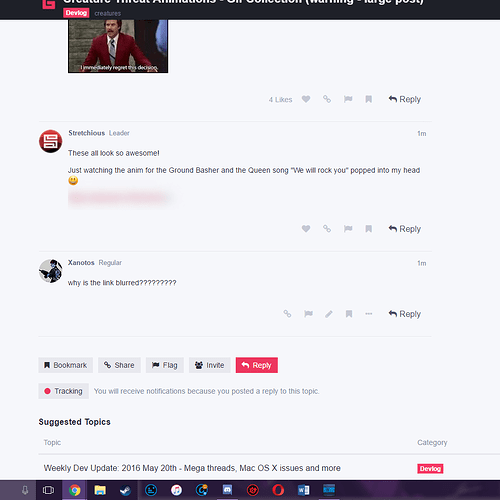 I thought you were just being cruel. Took me a second to figure out how to see it:p