Alright guys, we’ve decoded the Oortphabet, now it’s time to unravel the secrets of the Oort Glyphs. However, to do that we first need to compile all examples of glyphs used in the game. From there we can develop a table of glyphs and where they are used to speculate on the meaning of the glyph. A few examples of the glyphs can be found in these pictures posted earlier this month and linked by @James today, and are confirmed examples of the Oort glyphs.
Block breaker glyph and Slingbow concept art

Until we have a true frame of reference, a sort of Rosetta Stone of our own, any translations of the glyphs will be purely speculative.

Note 1: None of the glyphs on what I believe are the number line appear on any of the tools or weapons. However, the same glyph used on the hammer also appears on some of the slingbow concept pieces. It’s definitely not a representation of the weapon, but perhaps a sort of power level? Maybe some sort of enhancement like speed or punch? That could help explain why some of the concept pieces have multiple different oort stones on them. Without more reference material or weapon testing, I can not gather any further insight to their meaning.

There are also examples here and here

Ok, hypothesis! The 10 glyphs are oortian numbers 0-9. Counting the outward spokes equals the number. Except… this is only true till you reach 8 and 9… then it seems that the theory breaks down… hmmm…

Good start I’d say. But the best counterargument is: There can only ever be 8 spokes at a time.
I’m testing various versions now on how you could fit numbers in there but it always doesn’t work for at least one glyph^^

edit. I give up for now. It could also be that the glyphs are just representative for the numbers but have no actual (mathematical) connection to them. I mean neither do our numbers^^
Or of course they aren’t numbers at all xD

Note 1: I’ve drawn a few correlations between the hammer and a few of the slingbow concepts. I can’t glean more info without more data.

Original post updated to keep all of my findings in one place.

I went on Art: First look at the containers UI and found this interesting representation of the Oort Glyphs: (I changed the image to highlight the Oort Glyphs) 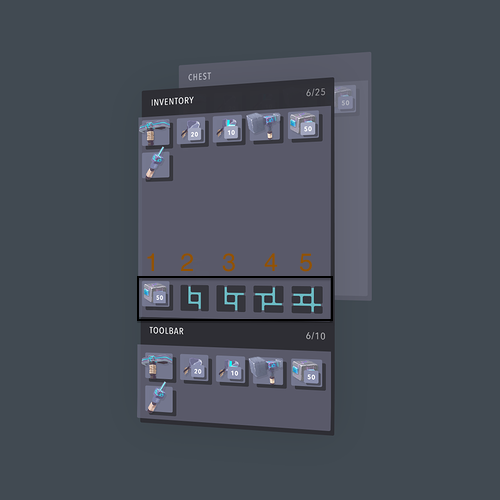 I’m only speculating, but, as seen in the edited picture, I hypothesize that 4 showcased Oort glyphs represent the cardinal numbers 2-5. I added a one because if I’m right then under that item an Oort glyph would depict the number 1.
Please give me any insight on what you all think

. It may be to soon to tell if this is correct, but I’m just speculating. Also, one more thing, #5 looks a little weird but I believe the number is determined from the amount of spokes coming off of the original square. I think that would be rule #1, there must be a square in the middle of the glyph for it to represent a number
wait a minute that wouldn’t work for #9 and #10 -_-.
New hypothesis! #9 and #10 go by a different rule than 0-8, though I’m sort of just saying this so that my hypothesis isn’t wrong…yet.
I know this all sounds a lot like the above hypotheses, but I chose different examples than the one shown by @Havok40k. Please give insight, but go easy on me

I’m a noob at decoding.

It’s good that you found that picture. Now we have a context.

Possibly true. Still, this is fairly similar in design to the line in the original post. It also hits the same design issue past 8 that you would expect on a system allowing only 8 spokes for a base 10 scale. We need more verified samples to compare. Good find y’all!

Maybe the ooartian system is base 8.

I considered that, but you would expect to see some sort of repetition of a pattern or similarity in 0 and 8 or 1 and 9. Instead, you have 10 digits, 0-9 most likely, and no hint at how “10” may be represented. More data needed.

More data with context would be the best yea^^

I would guess we will very rarely see more than one glyph in a place, which makes using our number system improbable, since you need more than one to say any number over 9, or whatever the base number is.

I am not getting a number vibe off them. Looking at these new grappling hook pics. I wonder if the the one in the first picture is more like a symbolic meaning, like “binding” as it looks like a twisted knot. Maybe the one that is on the hook could mean some like “returning”. Or maybe “grasping” as it looks like a hand grasping around a pole.

The glyph in that pic looks similar to the one in the OP, but you’ll notice that the downward bar is on the left rather than the right. That could imply it has a different meaning. As for the bottom glyph on the grapple hook, we’ve not seen this glyph used anywhere else, but since it’s been specifically used in E̶v̶e̶r̶y̶ ̶S̶i̶n̶g̶l̶e̶ the original concept of the grapple hook, even being drawn to the side in the first piece, I think it’s safe to say it’s meaning is related to the grapple hook itself. It may even simply mean “Grappling Hook” in Oort glyphs, we simply don’t know otherwise.

Perhaps all Oort glyphs have a numeric double meaning, shown by the number of lines touching the edge.

I also want to add this pic of a hammer into the examples.

Who knows what they all mean but the last one definitely looks like a fist to me. Could mean “strength”.

That’s exactly what I’m wondering. The style of the glyph only allows for a relatively small number of possible combinations, so it’s likely that any difference in orientation may change the meaning. Then again, we may yet be missing some key detail or rule that would explain so many unanswered questions.