Have a few questions…

I was experimenting with my centraforge again and was wondering if there are people who needs t1 hammers and what price I could get with this:

I only made the one to experiment with mostly for myself but no harm asking if this would be profitable.

Also for t6 diamond without any speed, does anyone buy those? for how much?

I wanna say I charge like 7k for T1 topaz, but I do forge them with higher end specs (lvl 8 or higher speed) so brews are not really needed.

As for the T6 diamond hammers, usually charge about 10k, with lvl 9 speed.

But honestly, its really about consistency. People will pay a little more, to go where they KNOW they will always be in stock at.

Also, put a price on your tools that makes sense to YOU! Because what most people do not realize is, how much mental strain it is forging non-stop!

Thanks nickk, yes that helps as a benchmark.

But to I am still unsure what it means when people say a t6 speed hammer.
is it diamond + 1 speed + mega fast brew
diamond + 10 speed
or topaz + 8 speed + mega str brews

I was aiming for 8 speed on the t1 topaz for exact reason you said but I ended up level 7 on a different craft (probably going to use it myself…T.T…) then realized its similar difficulty as forging a t6 diamond hammer if not harder, So i thought I would need to charge a similar price to a no speed diamond hammer.

So I was trying to figure out what would fetch a better return and has actual buyers.

Then I thought to myself I can go even more budget with lvl 5 speed, 5 durr and 4 aoe. => which is this craft.
or further even with just 2 boons. 5 speed or 5 durr then aoe and some random 3rd boon if it shows up probably loot.

A diamond hammer with +10 speed doesn’t hit the Max speed cap, so kinda pointless putting all that speed on a diamond hammer. Diamond does need a level or two of speed forged onto it with a Max fast brew to hit the cap.

Topaz is your ideal speed tool since you only need to forge it to speed level 8. Topaz also uses less energy per swing and has better durability.

Some people prefer diamond hammers since they hit harder. Since speed brews are rather expensive, I personally prefer to forge the speed and use strength brews when needed. Others prefer speed brews.

If you get a chance, have a look at the forge shop at Sydney on Lasaina. It shows clearly what damage each level does with and without damage brews. As long as your signage is clear and concise, buyers will understand how to best use your forged tools.

This is a forger’s best friend <3

You can post all the websites, guides and tips, but in the end you can’t control RNG. At best, from my experience anyways, you can do a few things to help tip RNG a little more in your favor but it’s your worst enemy.

You can forge a tool 20 times in a row and you would be very lucky to have the same outcome twice. It sucks at times, but you can have fun with it.

Maybe I’ll make a video sometime next time I forge something and show just how RNG is a crapshoot.

I agree with this for the most part.

Specifically with Multi-Shot bows, and clear weather totems.
Everything else, the luck matters much much less, and is rather reasonable.

This is why I charge 50k for clear weather totems… lmao

thanks econodog
hmm, I dont think I would forge the t6 topaz, mainly because I can/t do it yet.

thanks nickk but i do know of this tool.
I was just wondering on the terms so I label stuff correctly
and actually make stuff that people look for.

i have a bunch of junk with the aggro quirk or hard as nails or the +weak/+bleed/+slow (which btw i dont remember the levels making it an even harder sell). a bunch of failed looters. etc. If anyone wants I am trying to get rid of it really really cheap. I just feel bad throwing into the minter. its stuff left over from previous experiments.

thanks redlotus
no you cant control the rng but its frustratingly fun in a way.
but its expensive to forge “as a hobby” so I need to sell out what I spend right?

[Max Lucent (Blink Umbris Rift) Forging | Forging Tutorial | Boundless v239] Pretty much how I craft most anything. I seldom waste mats, but as @Grimdian stated, they could make decon 4 and have it return 100%. This video guide @Jiivita created may not be the best way to craft, but it has proven to be the most consistent for higher tiered tools, at least for me. I use this and while there is a bit of RNG especially rolling the first boon as you really want to roll the hardest boon…

I never tried this method…but it sounds so expensive…
Is it even profitable for gem tools…? o.o

Profitable I doubt … but it does work …

I will stick to my method then ^^ but thanks for sharing.

I just wish I can squeeze an extra 10 or so rounds into my setup. 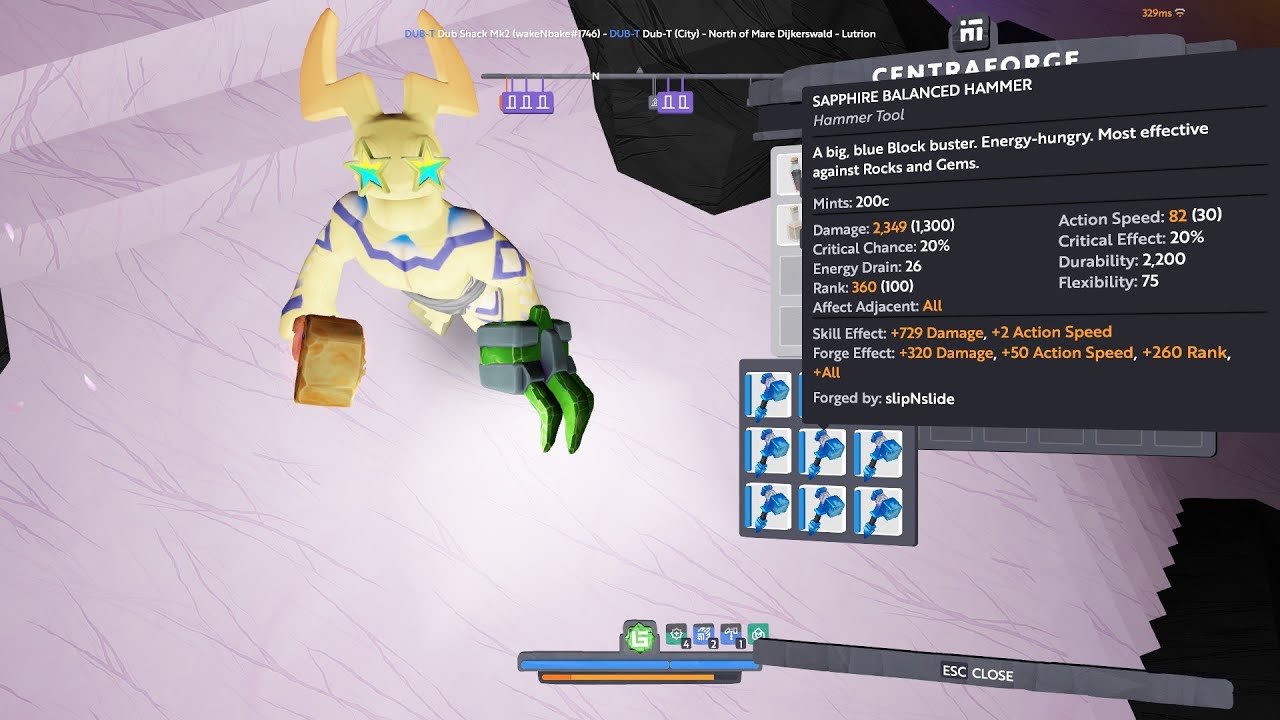 in response to the OP.

Topaz speed hammers are popular for farming XP using gleam farms, so there should be a market for these.

As for T6 hammers it comes down to personal choice.

I did a forging experiment and started with sapphire speed hammers aiming for the 120 speed cap (+50speed) I found it to be an absolute nightmare to forge these, in the end i got fed up of deconstructing.

I then went back to a method a fellow TNT friend shared with us for a very simple diamond hammer which only focuses on 2 boons, AOE and damage level 8 (t6 rock) for this i had consistent results and breezed through the forges with very few decons. infact the ingredients used were on the lower end aside from the pure compounds. most of the time the random 3rd boon ended up being magnet.

I then did a final experiment adding the lightness gum into the mix, so whenever i got aoe and damage off the bat I then went for the speed. This was much less consistent but worked on average 60% of the time. the only upside to this is then a speed brew takes you to speed cap or you can use a cheaper speed brew to get you to cap.

Anyway I kept a record of my costs (cos im a nerd) yep i made a spreadsheet! and i found the diamond way including a speed brew wasnt far off the sapphire way with the strength brew which in turn made me decide to stick to diamond because of the ease of forging in comparison to the sapphire. I priced them both on the basis of the current in game brew costs so they would average out the same, and I have now found the diamond sells out more frequently than the sapphire.

Sales however have been slow to start, perhaps just down to not being a proper shop but in the last week I have been seeing daily sizable sales.

hey, thanks for the video, nice of you to go the extra mile.

How do you feel about slapping effect + special at the same time?

then you can vigour cat for the third boon if you want.

in effect you use (and risk!) 1 less vigour catalyst in exchange for gums but I don’t know if this method will work for you since you use debuff boons.

My math isnt perfect as i didnt go through all permutations but my intuition tells me this is good enough to consider.

numbers rounded but based on the forge simulator by mayumi.

Hi envyv777,
thanks for the reply. I decided to go with +lvl 8 speed on my t1 topaz since the people who would want a t1 speed hammer probably wants to hold a regen bomb on the other then just spam.

Also good to know some people buy t6 without speed, that third boon even at level 1 is exponential pain to get…

Wtf Speed hammers T6 or only Trigger Speed thats all you need !!! Thats so easy !!use mega Speed brew and its done damage 8 aoe and its done thats the far easiest Forge you can do …

So what … Don t Tell me anything Other i ve calculated everything Speed hammers are best Option !!!

I don’t know man trying to trigger a 3rd low level speed is much more difficult than getting just the 2 boons + almost anything else, atleast for me.

I guess saying it is really hard would be exaggeration but it is much harder by comparison as 2 boon is really really easy. This is what i meant to express.