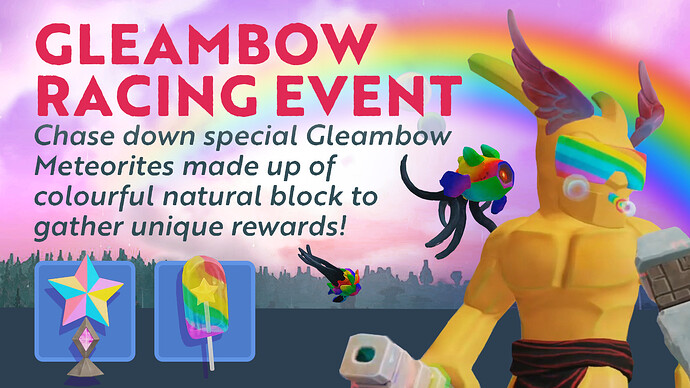 Starting on December 28th at 6 AM CST (12 PM GMT), Gleambow Racing will return.

This limited-time event rewards speed and skill as Citizens chase down unique Gleambow Meteorites made of colorful natural blocks. You’ll need a special Gleambow Totem to destroy these Blocks - craftable in a Workbench. It’s a great chance to gather unique rewards with which to decorate your Build.

Once you’re done chasing Gleambows, kick back in your Beacon and Craft the decorative props just for this event. Don’t forget to head to the Exchange, where you can pick up a Gleambow wearable or two.

How does Gleambow Racing work?

On Rugged and Inhospitable Lush worlds, all Meteorites are replaced by Gleambow Meteorites. A Gleambow is a unique type of meteorite made from natural Blocks in various colors. They can be identified by their spectacular multicolored trails. If you’re lucky, you may even find a pure Gleam or Glass Gleambow. Fancy!

Once a Gleambow touches down, you’ll only have a short time before its Blocks adopt the natural colors of the World. Sprint, Grapple, Warp, slide, leap, swim, and Buff your way across the landscape before it’s too late.

You’ll need specialized Tools to break your way through those super-tough Gleambow Blocks. A Gleambow Totem will do the trick, so make sure to get hold of one (or more). While you’re at it, keep an eye out for some strangely colorful Cuttletrunks, aptly known as Gleamtrunks, who’ll try to make life difficult. Don’t ignore them! You might find their pickings useful for your next race and more.

New to Gleambow Racing, like the Monumental team? Don’t worry; Jiivita has you covered with an excellent video rundown. 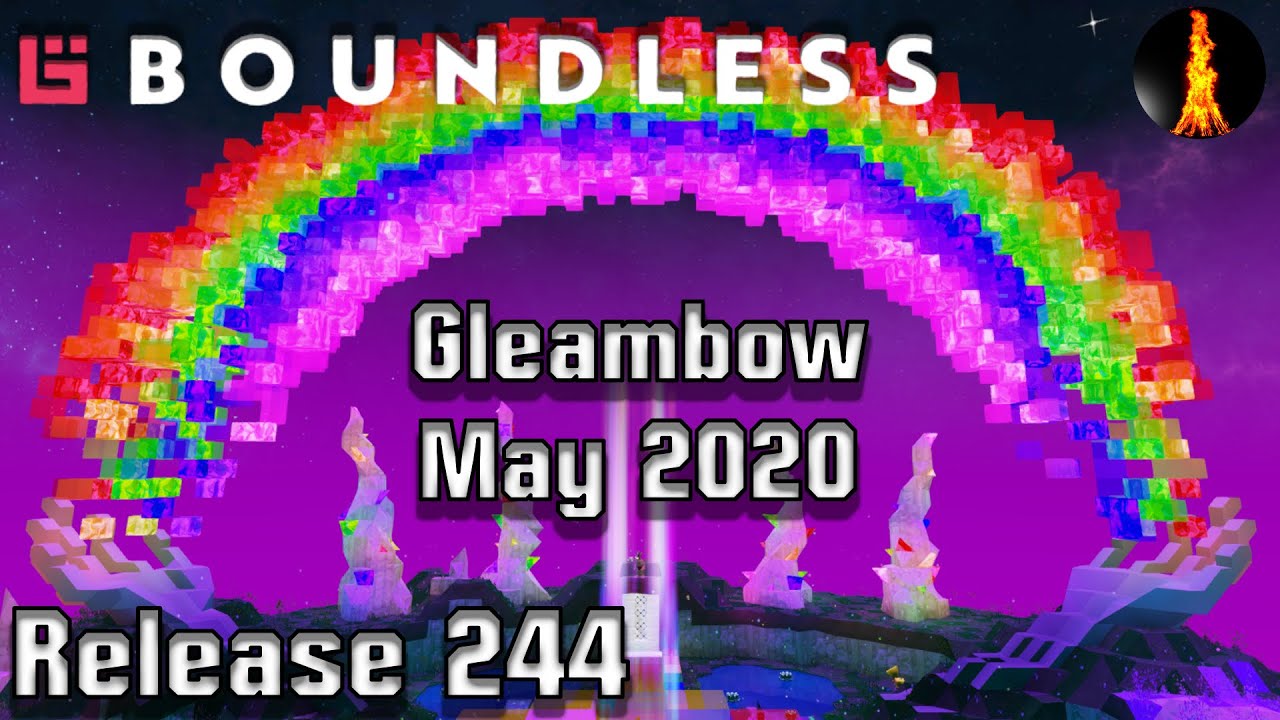 Tweak your Skills, grab your Gleambow Totem, and down a Speed Brew - ready, set, Gleambow! Gleambow will end on January 11th at 6 AM CST (12 PM GMT).

Yay, one of my favorite events is coming again

I’m excited to see that Monumental is excited about these Boundless events… but I’d love it even more to see them introduce some new ones of their own!

If there’s need for reasonable priced totems I can get out a shop stand or two.

They’re easily crafted during the event but I think I still several hundred for those that want to forge before.

Used on a gleambow - the totems are fine with zero damage. This helps the forging a lot - since totems are awful

whooho! one of my fav events too! ill be buying A LOT of gleambow sacs!

I love you for answering my question before I asked. Time to dust off the forge!

Also, anyone going to do a marathon gleambow hunt? Maybe for the new year?

Yay one of the only PVP events in Boundless!!

but I’d love it even more to see them introduce some new ones of their own!

Of course that means it will either be them releasing cows and we have cow tipping or horse shoes or some other crazy Texan thing… meant more as a joke than anything and since I was born in Texas I’m allowed to make the joke!

Hmmm yeah we have a lot of new players too. Here’s a warning. Unlike many other activities here this is in fact brutally PVP sometimes.

No negativity intended, this is a different sort of event.

On popular worlds, the timers get tight. Unlike regular meteors, when you trigger a region center, the meteor spawns near the outside of the region, and it’s a real race. Once the timers dial in it’s hard, sometimes a whole planet needs a cooldown.

If you come at this thinking that if you spawned a meteor it’s “yours” you’re likely to be disappointed. Once it’s spawned it’s a race and a free for all. The meteor core loot goes to all players present, so do the sacs. But the blocks are for who gets them first.

With the right attitude, it’s a ton of fun.

Every instance of the event has caused a ton of wailing

It’s also worth mentioning for people that haven’t done one - it’s not all glass and gleam here. In the last event there were 22 block types. This allows you to not only capture the rare colors, but to collect resources in colors that are assigned to planets but don’t actually spawn there, which is really nice.

With the proper expectations, it’s a super fun event. Just don’t be expecting to go right out and collect a ton of gleam in marvelous rare colors right off the bat. There more to it than that.

Here’s a look at some shots from one event where I spent most of a week doing nothing but primarily cleaning up dormant meteors:

Looking forward to this one I hope I get to spend at least a couple of days running hard. Especially since I just got two awesome sets of grapples from @Blendly.

Also, it looks like these guys at draconis have got you covered:

It requires Elemental Fusion. I would go buy a few stacks of those if I didn’t have plenty already. I’ll leave it for folks that need them. 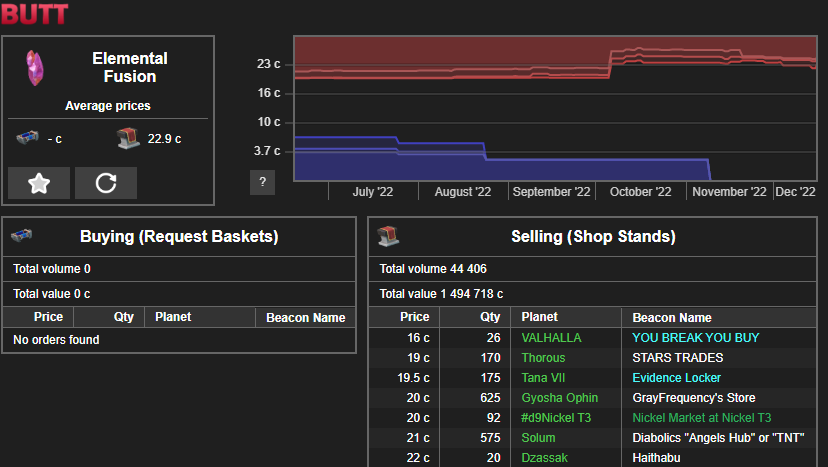 Big props for whoever is running that shop!!

But I also have midterms soon

Aye at the last event people were trying to get what, 200c for these? Average price around 100c unforged.

A true Texan would have suggested tumbleweed races or a rattlesnake roundup! Lol!

Even though Monumental isn’t at the stage of delivering new content yet, I appreciate the amount of ‘content’ Monumental are giving us during the festive period - keeping us busy!

Yay another event to look forward to and another first for me.
Super excited to jump on this with friends

Azure is my shop on Finata. I check it daily and keep the totems stocked.
Also have 4 shop stands selling snowballs for 0.5c.

Cool, an event that I never get to experience because my general reaction time is much lower than that of others, and thus I never make it before the entire meteor is completely gobbled up.

@Tiggs @monty1 Is there any chance we could have the meteorite core at LEAST provide something (That isn’t the usual Oort/Metal/Mob Drops) for the not-so-fast players that participate? I got completely shafted the last time this event came around.

YES THIS THANK YOU.
Gosh, I applogize, Im tired, its been a long day. We all want new content, but that’s not happening for perhaps up to a year. In the meantime, please don’t wet blanket their efforts to jump in and at the very LEAST offer what we had before… I am STOKED they are doing these events. thankyou thankyou.