How to create and manage a huge combustion / kindling farm?

Than you re Dilligance ?
He is selling for 45c since several Montag thats true but all other for 50c
If you re Not there there is Somebody who sells now for 40c

Sure everybody could sell everything cheaper i can sell cheaper too and overflood the Market with it but why?
You needed to Farm the crops or Set Up Special Design to get more and have less shred and also to Farm petrolim also a huge time Invest or buy both…

IT is the Same with Tools why does everybody sell them so cheap? You need to get the Material by Farming or buying and the time you Invest at the Forge by example a T6 Hammer selling for 8k with a benefit from 4 k as an example , the miner gets of this Hammer more then 10 Times or even more depends on what He mines as reward, so why does such a Hammer doesn t cost 12k or more ???

Just my opinion Not against Somebody Personal.

Normal price was 50c, but now there is more than 200,000 Shred for sale at 50c. If you flood the market the price will drop as more people put it up for sale. Mine is for sale at 40c currently on Grovidias Te, I predict with the number of people now farming shred the price is going to crash.

I know there are 340k on the Market and 230k come from me so no worry about that .there are n t more people, i watch kindling shred since more than 6 month . 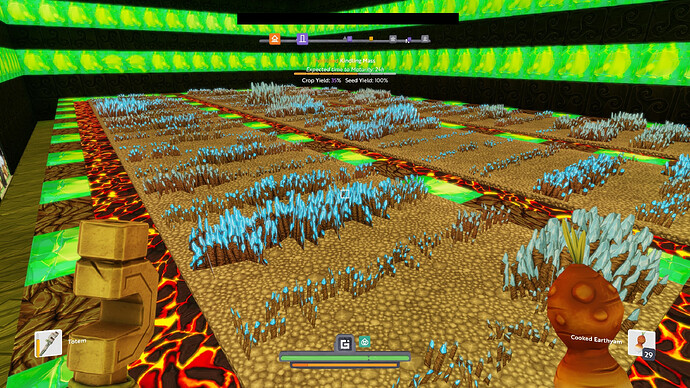 Everything is good , but you ll get 55% Trust me, IT s Not displayed but with Epic you ll get it

How Long have they grown, that is Not much .
Sure you have Epic skilled? Used right Charakter?
Should been Minimum 85 shreds for50%

Did you know you can put Lava in the same space as the deco gravel and still be able to plant on it?

Im saying that you can, without burning the crops.

Are those 5-wide rows?

Not necessarily. It doesn’t calculated the odds over the total plants you have. At each plant you have a % chance of getting crops or not.

I understand your point and would usually agree but my time, energy and cost has been paid 10 times over already with kindling because of how long I’ve been doing it. Everything is bonus for me at this point. Kindling is the only thing I sell and when I did price match I would barely sell some and my inventory just got larger.

This thread reminded me i have a tiny (relative to everyones here) kindling farm…i forgot i had it.

my farm is 10x20 plots and four floors high, i tend to it when i have the motivation to, dont feel bad for neglecting it from time to time

Even with the Farm Epic and 35% crop it can still dip below that %. I have been keeping track of my harvests for awhile now and I am averaging 51.3% for the last 28 harvests.

Thats OK i have nearly 53% , IT depends on how Long the field has grown .

I am still working on procuring the decorative refined black gravel

I also have a lot of thinking if I should:

You could try to hire someone from the upcoming auction for an hour to help you clear trees, plant seeds or build it