I never saw myself as an explorer or thought that would make up a big part of my play.
But to my surprise i spend a lot of time ingame with exploring portals and checking out peoples builds.
And regularly i find something that i really like and feel the need to show the creator some positive feedback, but most of the time nobody is around.

Some time ago I shared some screenshots of my gardens here on the forum an really liked to be ability see which one people really liked.
Therefore my suggestion is to have a system in the game more or less like the hearts here in the forum.
A quick way to leave positive feedback ingame on a per beacon basis. It should not grant any ingame rewards, just a way to give someone a pat on the back.
Of course ingame mail could also serve that purpose but not everyone feels like writing all the time and it’s on a more personal level and nothing that accumulates. Not sure if it should be publicly visible, though.

Would love to hear your thoughts!

29 Likes
:gift: I wish we could leave gifts for players and likes on their builds
Voting Decoration
boundmore November 26, 2017, 6:27pm #2

A quick way to leave positive feedback ingame on a per beacon basis.

I actually suggested that, although as a part of prestige system.
I like the idea of it no matter if there is an in-game reward for it or not.

Agreed, this would definitely be great - along with a mechanic to donate (probably coin) to nice builds.

I’d like to see the idea of likes multiply/weigh in on prestige when it comes to rankings.

A craftable letterbox … Write a few lines, say hello and leave the letter in the box. Say sth. nice, that you like the build. Or you could leave a friend token inside the box. It would be a nice surprise.

If we’d ever have maps (in an early stage of the game), you could leave one there which shows the location of your homebase. Or the friend token could include the coordinates for your home too.

I met someone new ingame, and completely forgot how friend tokens work, and that I stored several on a shelf. So I have to rely on meeting this person again accidentally. For me it slightly made the impression of a neighbourhood, since the person claimed the homebase not far away from mine. I’m dug in my base. And have not the skills nor requisites in order to portal to another orbital body.

I’d like to see the idea of likes multiply/weigh in on prestige when it comes to rankings.

I’m pretty sure people will start to fake or buy likes if that’s the case.

Just how some people faked prestige with piles of worthless gleam.
It could undermine the whole system.

I think it would also be great to show the total number of likes of the builds on the “Welcome” notification in a settlement. Would also be good to have its own ranking in the planet alongside the prestige ranking to show which settlement is really enjoyed by the community and also helpful rather than those aiming for the high prestige value blocks on their build. It’s kinda like the must visit “7 wonders of this planet”-ish that might not get noticed due to its low prestige value.

I think “likes” applying to prestige is a great idea, but with a bit of a manipulation problem. We already see people get upset over prestige when people “optimize” their scores by spamming high value blocks with no consideration toward placement or function. Now imagine those same people pushing everybody they see to give their builds a “like” just to raise their score. Now imagine somebody who is truely famous, let’s say a famous youtube like Markiplier with tens of millions of subscribers, say he comes along and building a mud hut. Even if only .001% of his fans “like” his mud hut, that’s a massive amount of potential prestige gain. Imagine if Markiplier actually vote pandered.

I don’t like to shoot down a good idea without proposing a solution though. So, one possible way to allow “likes” to affect prestige score fairly without being massively susceptible to like manipulation would be to cap the number of “likes” that affect a build’s final prestige score based on its base score (score before bonuses and multipliers are added). So a build with a base score of 1000 may only allow the first 10 likes to apply to its final score, and a build with 100,000,000 base prestige allows for many more likes to apply to final prestige. This is still susceptible to “like” manipulation though, just much less severely.

Another possibility is to not quite integrate likes into final prestige at all, but still allow builds a rating based on “likes” and base prestige. Similar to the above solution, but rather than add the results to the final prestige score, you would rank the results on a letter scale. So, a popular build would have a score like 10000, and a letter score like A+ based on the number of likes. The letter score has no effect on final prestige score, but reflects the number of “likes” on a relative scale based on base prestige, not total “likes”. This makes it so two builds of similar prestige score can’t vote manipulate to get ahead of each other.

I like the idea of giving a “vote” for a build. Nevertheless it makes me sceptical. Not because of sort of a vote spamming like you explained before, but rather because of reasons like visibility (will your build be exposed to other players much in the world?) - it could mean “ground value” of highly populated or dense regions could be very high, simply because there is a higher frequency that others might come by and like your build.

The other reason why it makes me sceptical is, it is a means of applying (even if it’s only a slight bit of) pressure to the player. If such a system becomes popular in game, I might be left on the outside if I won’t manage to build exciting, beautiful and loved builds. This doesn’t mean I’m not in favor of gaining likes and hearts for my builds (of course I’d love that, everybody would), and it would be cool to find out how such a system appeals to the player base. But It’d make things very competetive. Still sceptical towards competetive gamplay, especially in a creative framework.

Personally I’m in favor of the idea of leaving a map towards your home at the place you are visiting, in order to make friends. It would be playfully inviting (hide and seek kind of gameplay) to me. And it would nurture my curiousity what kind of place this could be. Check and find out.

it could mean “ground value” of highly populated or dense regions could be very high, simply because there is a higher frequency

I guess this should already be the case because of footfall. I own 1 plot in Therka Market. Nothing special. But this thing is making more money then all my other build combined just because ppl cross it on their way through the city.
But I don’t have the feeling people care much for it.

I might be left on the outside if I won’t manage to build exciting, beautiful and loved builds.

I feel the same. That’s why I think there shouldn’t be any in game benefits connected to it.

Then maybe we should leave out leaderboards. Individual scores without any means to compare them globally takes out some of the competitiveness. On the other hand we already have per planet leaderboards on prestige.

you put a sign on your build saying “liked by moebius” 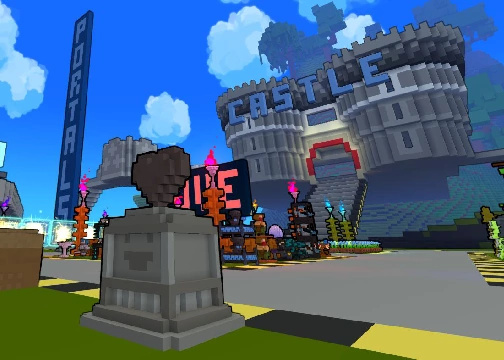 I like the idea as long as there is no connection to prestige or anything. Simply a nice way to know some people appreciate what you did. Any connection to prestige or any benefits simply invites those who love to show they are better than everyone else will cheat. Perhaps simply being able to tap a button on a beacon to like something and the owner can see how many likes they have and know what people like considering the location.

I’m not sure about “faked prestige”. The ranking system put some pressure at the time to choose the nicer or the expensive block. Perhaps the game can count the blocks on the storage also, so you can use whatever block you want for building and craft the expensive ones if you want prestige+XP

Do you mean whatever blocks you have in storage should count to prestige even of they aren’t used?

Do you mean whatever blocks you have in storage should count to prestige even of they aren’t used?

I was puzzled by that myself. I guess whoever has the biggest warehouse is the prestige champion. lol

Yes, prestige is a matter of wealth, not aesthetics, so what’s the point to tight them together? and also coins should be included, so big sellers doesn’t lose prestige with their business.
And this way, a like system can be totally independent of prestige.

The dictionary defines prestige as:
“Widespread respect and admiration felt for someone or something on the basis of a perception of their achievements or quality”
Which has nothing to do with wealth.
Personally I’d prefer the option to be able to opt out of being absorbed by a higher prestige neighbour and they can have as much as they want from builds, storage and coin if that’s what floats their boat. It’s one of the biggest aspects of Boundless that puts me off playing sometimes. I’ve got a few builds, one on munteen paradise that I chose to be apart of and a couple on Therka, one of which did get absorbed even though I chose somewhere out of the way at the time but then some new neighbours buit a huge castle right on my doorstep. With your proposal then it would simply be the biggest shop on whichever planet would always be the capital regardless if it was even just a huge open field with shop stands and an underground storage vault. I think for my next build I’m going to build my home as I want and then build an underground vault filled with gravel.

I built a nothing structure and then added an underground vault containing my base. We could mix these things up hehe