So this week the art/anim team have been developing further the Mystery Box from it’s Concept!

It’s a special item that after being opened then disappears from the game. This therefore allows us to have bit more leeway to add more detail on the mesh and also give it a bit of animation jazz.

Behold!
Here’s Jess’s model created in line with Amanda’s concept (clearly with her own creative stamp)! 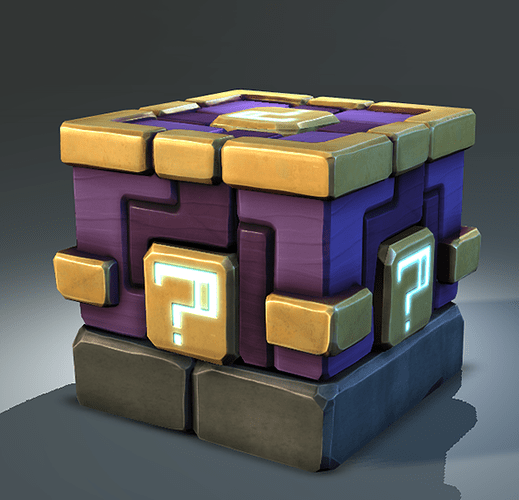 My thoughts were to:
a: Have the box appear from the ground so it can work not only in the inventory or as a cut scene… but also in the in-game world on the floor(or any flat surface) so we can have it as a tangible in-game asset to run into and grab the loot dropped in the same style as the creature harvests.
b: Have the buttons work mechanically ‘charming’ like the style of the machines and weapons when animated.
c: Have the personality of the box exude the excitement a player will have when opening it up - like cracking open a pinata. This also adds to the suspense. (PS - I’d love some crazy godray vfx’s coming out the box to add to the tension of waiting for the items enclosed to be revealed.)

Next step - I’ll take Jess’s model and re-rig my prototype to work with her new mesh. I’ll post again here when that’s done.

Anyway, I hope you all enjoy this post and let us know your feedback and thoughts as usual.
Have a great weekend.

Lol, btw I just added those items in for my prototype randomly (first thing I found in Jess’s archives that was colourful) - I think the designers mentioned the MB is mainly for non-game-affecting-items like wearables?

But yeah I’d love this to be re-used and tailored in a number of other ways open to everyone for different purposes with a variety of different meshes for different types of boxes( ie. not only for purchasable items) but maybe for also like rewarding a guild with a pressie drop or a way for others to ship items to each other… I guess as long as there’s not a way break the currency system - I would say why not?

Certainly I wouldn’t want to face the wrath of @Vastar tho…Maybe @luke-turbulenz and @olliepurkiss have ideas on what we can and can not try out.

Bring on the debate! (Or some more clarification as we progress the development)

I like it! Has a ton of personality; will definitely feel good to open these things

One nitpick: the box “chunks” (corners) that fall away feel a bit weird to me as they fall (floaty)

Yeah they do feel either a bit floaty or like they were stopped suddenly. It feels like with how fast they flew off the box they’d travel a bit further. Overall I love the look, and if they’re going to show up in temples or something that would be cool.

would gladly open my wallet for those.

I love the second animation who dont like a explosion

Animations and visual style are perfect and typically Wonderstruck as always!

One thing I dislike is the random effect of making items accessible via slotmachine mechanisms.
On the one hand I can understand and like it - on the other hand my opinion is that it puts the gamemechanic of searching and earning ones items via actually playing the game out of scope.
And to be honest - I hated the random item boxes in Overwatch. There is no actual gameplay bound to it. And what you get in return for actually putting MONEY into these items is a (bad) joke. In Overwatch it might work, since fluff items are not to be found in the levels. But in Boundless, all these items could be harvested and earned and found in the gaming world. The questionmarks on the boxes are nicely done - then again - what does it have to do in a world which is supposed to have fantasy and science fiction elements in it?

This looks GREAT! Like frosted flakes great. Cant wait till this is in game. I haven’t been active recently but jeez, seems u guys are on a roll with the new content.

Nah, I think I made my point pretty clear in the previous mystery box thread.
I’ll just wait for the implementation of this and have a laugh while reading through the steam reviews

Well, other games like cs:go, hearthstone, Dota etc. don’t have these “funny” reviews though ^^.
But maybe people will really hate paid skins in this game

Only difference being that those games are all “match” based.
You can’t find such lootboxes in MMO games, and for a good reason I guess.

and for a good reason I guess.

And what kind of reason would that be? I don’t know what’s so bad about paid skins in games… (better than having to buy expansions imo)

You can’t find such lootboxes in MMO games, and for a good reason I guess.

How about you make the mystery boxes work like lootboxes in overwatch? So you can buy them but you can also get them without spending any money (maybe after leveling up?).
Also they shouldn’t drop items that help you advance in gameplay (they shouldn’t drop links/currency)

I like how overwatch ties loot boxes to level progression, though that idea conflicts with b< progression in that OW has no upper limit to leveling and b< does. Also, OW does drop currency via boxes, and why should it not? A small chance of a nominal amount links every other loot box would not greatly affect the economy and would serve as added incentive to find / buy boxes.

Also, I’d like to see them purchased with both in-game and real currencies as well as discovered randomly in dungeons or titans.