It’s beginning to look a lot like Oortmas! To celebrate the holidays, Boundless is getting festive for two weeks. Starting on the 19th December and running to the 2nd January, we’ll be reliving all the fun of last year’s event, plus a whole bunch of new goodies!

Wintry snow will be seen throughout the Known Worlds, and many Creatures will be seen sporting little Oortmas Hats. You’ll want to keep a keen eye out for these, as they’ll drop extra-special Green Candy Canes.

Green Candy Canes can be used to Craft decorative Gift Boxes and festive Oortmas Trees. Red Candy Canes are gained through special Snowball Meteorite events (more on those in a moment) and are used to Craft Snow Citizens. This year, Citizens can also Craft special Twinkles to deck the halls of their Builds! 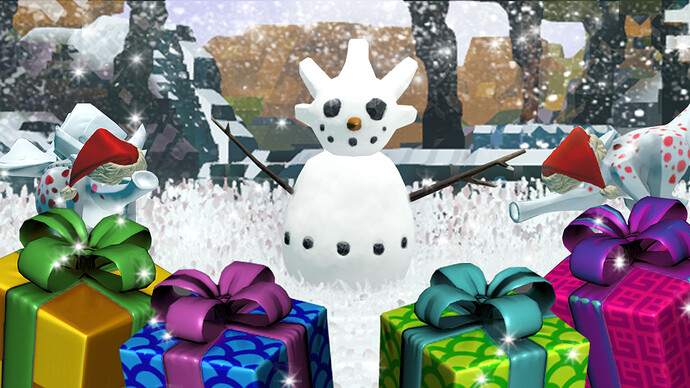 Of course, we’ve got a whole host of new Wearables coming to the Exchange for a limited time only. Once again, the ever-popular Father Oortmas beards, Rudolph the Red Nosed Wildstock antlers and Snow Citizen mask will all be available. These are joined this year by the Oortmas Hat and three designs of Winter Scarf.

We’ve also introduced the brand new Candy Totem, which is grown from special Candy Seeds before being harvested and used as a Tool. Pretty Sweet, huh!

Now, more about these Snowball Meteorites! For the duration of the Winter Event, special Snowball Fight Meteorite events will occur on Starter Worlds. Rather than a regular strike, a giant Snowball will crash to the surface of the World, bringing with it a swarm of special Snow Spitters, which will launch their chilly projectiles at Citizens, and are impervious to regular Weapons.

You’ll have to fight snow with snow! Gather enough Ice from the Meteorite to Handcraft a Bag of Snowballs, and give the icy critters everything you’ve got! These will do direct damage to one target, and are only effective against Snow Spitters. There will also be no Defeat Penalty on these events, with Players instead building up ‘embarrassment’ from being hit, before heading to the sanctum having lost their ‘Meteorite Life’. As well as Red Candy Canes the rewards for these Snowball Fights include Food, Brews and Gifts. Poorly behaved Citizens may end up with Coal…

We’ll be unveiling the new props over the coming days, so keep an eye out for those…

See you all on the 19th for a snowball fight!

These are joined this year by the Oortmas Hat and three designs of Winter Scarf.

But I will regardless

Why at all costs want this game so atypical and exotic looks like the rites of reality that have lost all spiritual meanings other than selling more and more. Who wants to keep his soul? It’s very ugly to want to recreate it in Boundless, it breaks the charm and the atmosphere. Why not create only events specific to the game? From there it would have no limits. And above all it would not look like the poor decoration of the neighborhood supermarket that does it by cultural obligation or especially pathetically commercial. Be inventive !!!

Poorly behaved Citizens may end up with Coal

@bucfanpaka sell me all the coal you get. Will help craft several mass crafts. Thanks.

She will get loads for all the mushroom

Well yeah loads of coal it is!

Between stealing gleam, dev photo edits, killing my friends, and something on Twitter recently I won’t even allude to here… I think I’ll have enough to fill my inventory several times over.

Haha, nah, you’re right - I just realized I forgot to mention the mass slaughter of mushrooms in my misdeeds! I’ve been such a naughty Oortling that I’ve lost track…

But Oorty Claus is making a list, checking it twice… will need all the elves to lug the coal to my base!

brand new Candy Totem, which is grown from special Candy Seeds before being harvested and used as a Tool

Clothing! I need one of those scarves so bad.

I need one of those scarves so bad.

I would use one as a loincloth, if I could…

Soon, I will finally have a beard!

A scarf? Devs have given Katt clothing?! Katt is… free?!