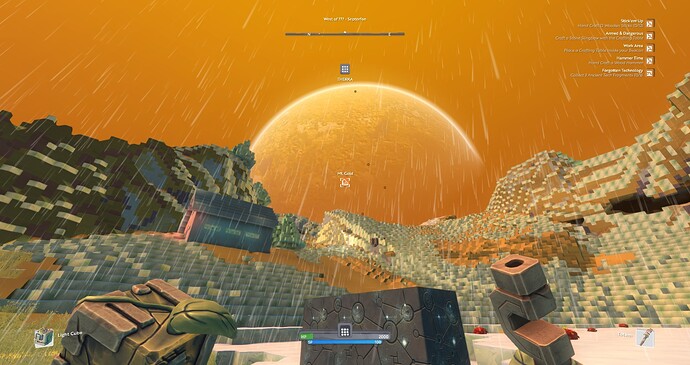 Portals coming in Release 157 next week.

This is so Sweet!

Can’t wait to fire this up later!

Creatures now drop items when the corpse is hit.
Multiple players can hit the same creature to get their drops.
Creatures will now always drop at least one item.
A particle effect is played to show if the creature has any drops to collect.

This seems cool but maybe not super intuitive. Is it being added to the tutorial system?[quote=“james, post:1, topic:6519”]
Portals coming in Release 157 next week.
[/quote]

A particle effect is played to show if the creature has any drops to collect.

This is suppose to disappear after harvest right? So far it stays until the corpse despawns… for me at least.

Oh and love the new flowers… at least im about 85% sure they were not 3d last night… hmm O.o

I love the stack breaking changes, thank you!

I love the stack breaking changes, thank you!

Oh do you mean stack splinting? Guess i’ll go see for myself lol

Yea stack splinting, it is more seems like it is more likely to get one. I could just be crazy though.

Wow! You guys have come a long way…

Multiple players can hit the same creature to get their drops.

@james, are there any guardrails in place to prevent other players nearby from stealing your drops? For example if they walk by right as you hit the corpse? I could see this popping up as an issue in the future.

This was covered in detail here.

There were no Live or Testing updates for Boundless this week. But we have been busy. The following features will be coming in the next release: GUI rendering, update and animation optimisations to increase game performance. Tweaks to the Player damage indicator in the HUD. Improved Creature AI, including creatures not falling off cliffs, avoiding obstacles and searching for routes to track you. Early version of Location Markers on Planets in the HUD. If we are lucky, we might be able to rel…

Those drops are just for you! Other players cant pick them up

I know someone mentioned this a while back but it is a bit odd that the world’s don’t have north and south poles. The north and south on the compass are absolute when they should really be relative to poles…

will the sun rotate the planets more natural way at some point or keep it the way it is now? for me its little off compared to the moon planets rotation axis.

Because the worlds aren’t spheres (though they may be rendered as such in the sky), they’re flat squares

Waits patiently for fishing , Boats and chairs to sit in with a bucket next to him to catch those big boys

Fishing , Boats or even Small Ships for multiple player would be so insane! This would give our Town a real purpose!

And purpose to my shipyard.