There’s been a lot of conversation about skills lately, and concern about point spread in the new update. So, I decided to share my personal skill spread in the testing server. This skill spread is geared toward maximizing self-sufficiency as a solo player.
Note: I’m lvl 49, so I’m missing the last 50 potential skill points. Spend them wherever you like!*
Pros: This skill spread is equally viable in crafting, hunting/combat, mining/lumber, and survivability. Has max bag space, and max item durability -or- death penalty reduction. Has max hammer skill masteries and max power and dexterity bonus. Can use Gem hammers and slingbows at max efficiency. Has enough mastery for Titanium ax or shovels for effective gathering of those related resources. Has high energy and 1 second energy recovery. Has Mass Craft. Can use Rage or Focus +1 trait in that tree)
Cons: Can not use precise chisels but can still use basic chisels. Can not craft long range portals. Can not resurrect others. Not effective with bombs. Not effective as a tank. Can not craft chisels, grapples or spanners above gold. No grapple mastery.

Base stats for comparison: 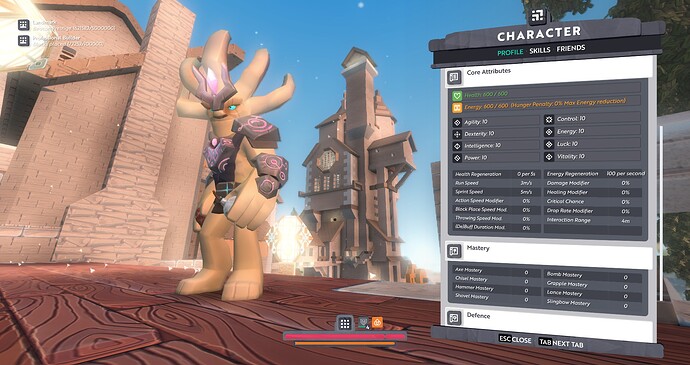 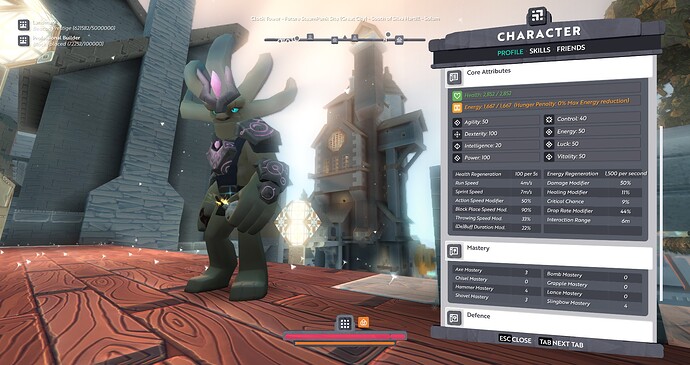 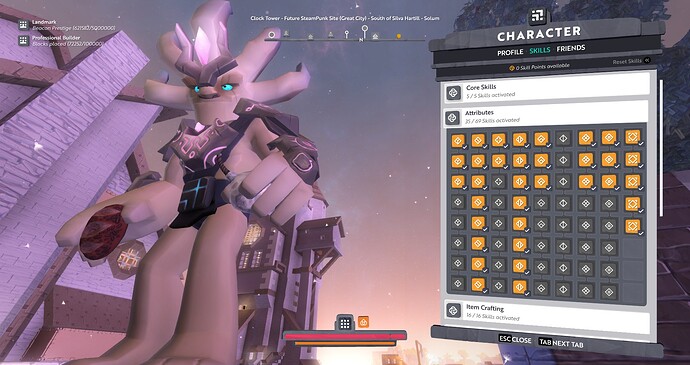 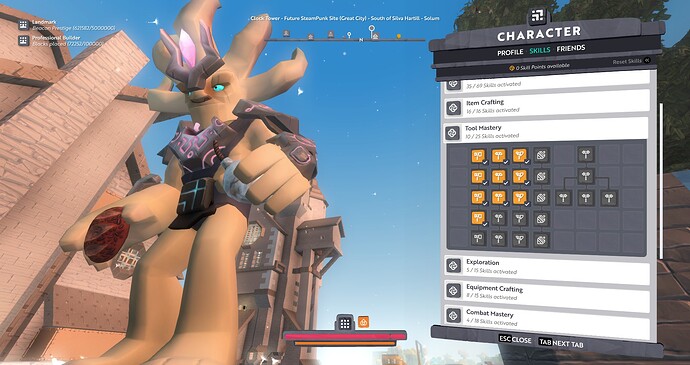 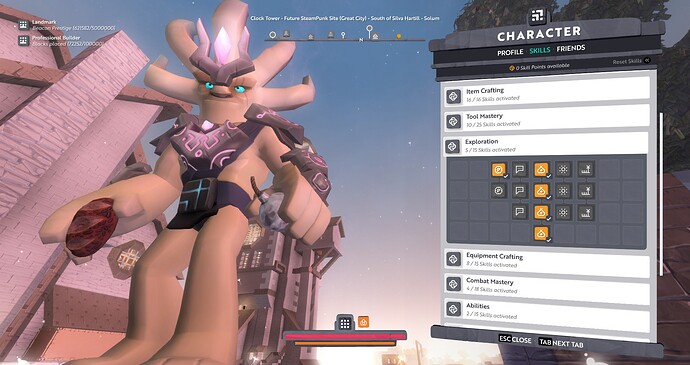 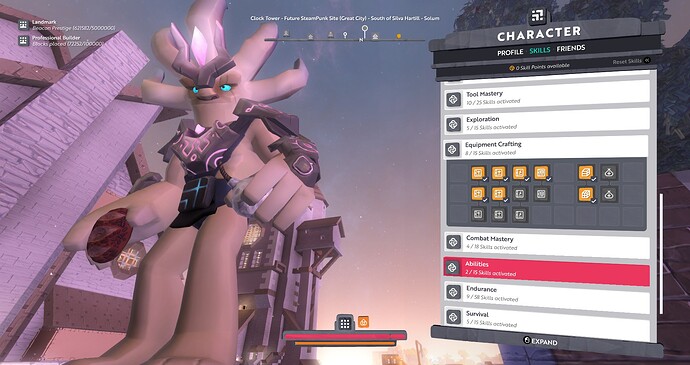 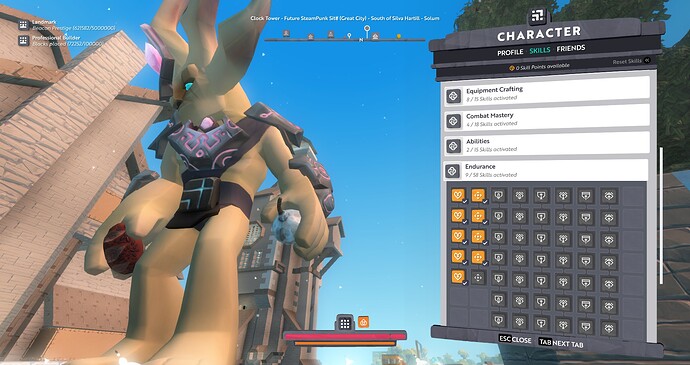 By the time I’m max level with a character I want to be able to do what ever I want and craft what ever I want with the only limitation being my ability to find and gather what is required to do those things. I shouldn’t be forced to choose what tools I can or can’t make let alone use. My building abilities shouldn’t suffer because I just don’t have enough points to master a specific block shape. If I spend the time and effort to go get everything needed, why should I then not be able to use it simply because I’m limited on skill points? I’ve already done the work. Where is my reward? On an alt?

This build may be of interest to you. You can substitute rage/focus for precise chisel masteries.

Did you find yourself learning skills for a short time (to craft what you wanted) removing the skill and then investing in another one.

I did not level this skill tree from 0, but rather re-allocated my skills at level 49 so I can’t speak for leveling progression. It’s set up to be able to craft all items in game except for a select few that I deem as having no impact on self-sustainability, including decorative gem blocks, and chisels/grapples/spanners above gold tier.

This build may be of interest to you.

Yes. It goes to show that you can either perform at max level like a max level character, or you can craft almost everything but have a level 20 character. Never both.

I’ve already rebuilt about 10 different skill layouts (probably more) before the cool down was changed from 15 minutes to you get 3 (Not sure how/when this number is replenished now so this final build is getting saved as is and testing for me is finished). Based upon what I’ve come up with I will have to split crafting with my wife down the middle which frees up points for me to take energy and regen, keep what I already have for quality of life and farming skills, and maintain my building skills for developing our town. She gets to replicate most of it and keep her ability to farm just about what ever she wants at max efficiency, but will be entirely reliant on me to craft everything for her farming and crafting. We both get to feel like we have max level characters, but are unable to invest in the Rage/Focus, Revival and Bombs mechanics or fill in for crafting while the other is doing anything else. If at any point either of us decides to stop playing or unable to play due to work, the other will have some tough choices to make. As it stands right now, reopening our shop is going to largely depend on the final outcome of skill allotments, crafting costs, and time investments. Without our shop…I don’t know. I could get a few more weeks/months worth of building and finishing up our town but in the end Lietty would get board and end up on League and I’d end up building factories and fixing outdated mods.

I went a diff route. I utilized the option of having three characters. In doing so I do not have a maxed out character at all. But when I hit mid 30’s, I still have max durability on all 3, and almost maxed out the skills used for each role.
My hunter in his 40’s has max durability and death, while having enough survival skills and bonus’s to be a total war hound. Without needing to be level 50 or begging for more points.

My Crafter can now make ANYTHING, and has max durability, and ALL skills needed to craft. No need for death bonus. I don’t take her hunting.

My gatherer miner has durability and death and enough tool bonus’es and luck to be a master miner. he cannot craft anything, but I have zina to do that. With shared storage its no problem at all to take 20 secs to change characters and gives me visual options, without mitigating all my skills over each time i want to play a diff role. that takes much longer. And I get multiple looks and goals.

I can work like a high level and get anything I want, and I have no maxed out character yet. @Havok40k Because you spread everything out on 1 character, you lost the potential of your skills. I know some of you hate the 3 characters as opposed to a one all.
But My little level 40 would eat you alive in battle because he is a hunter with some gathering skills. But first he is a hunter maxed. It takes so much more time to level from 30 to 50, than it does 1-40, that you can have 3 masters of their areas long before you hit 50. And at 50 you still won’t have all the skills you want.
My crafter can make more than you and she isn’t even 40 yet.
My gatherer can mine/chop/dig more than you, and all 3 have enough skills to use gem tools of “their” role, and gem slingbows.

It’s impressive and one of the best skill spreads, but it falls short to my low levels with the games current mechanics.
I am just comparing abilities and limitations between utilizing the games design, as opposed to fighting it. Not a bash on you at all. Your character is probably as best as it could be going that route.

This skill spread is maxed out at both crafting and gathering. Your wife, for example, would not be impaired in any way as a solo player here. How would you further improve the gathering and crafting potential here?

Furthermore, skills like revive and healing are wasted on a solo player. With this build. Your potions will self heal at max potential, and revive is only useful in group hunts. Furthermore, with maxed out power, dex, and gem slingbow mastery as well a max health and energy regen, you can solo level 3 meteors with ease even without popping rage/focus. You won’t encounter higher level meteors as a solo player.
Rage skill is only particularly useful as a tank build, and obviously you won’t need to tank as a solo player, so focus is most useful as a combat steroid. Truthfully though, everything is usually dead before you will have enough stacks to use the potion effectively. It’s very expensive to craft!
So please, give this build a try and tell me where it falls short of your expectations as a max level character? Because my testing shows that this build hits max potenting in every measurable field relevant to solo players. Being able to craft your own potions and food provide ample buffs in any field it falls short in, like resistances (Shielding meatloaf grants 70 points in armor and 30% resistance. Pie is even more!)

All other ignored skills in the skill tree are only useful in collaborative settings. As the criteria given is max level solo players, this tree spread handily achieves all roles a solo player will require.

@Zina there is no lost skill potential here. All abilities are at max potential without any overspending. The only place your alts may out perform this spread is in a collaborative setting encountering things a solo player will not. Read your skills carefully so as to not accidentally invest valuable points in needless things like more energy regen per second than you have max energy, or tool mastery higher than what gems require.

Very true. For now until they re balance things again, I think that is a very effective build. Ofcourse you will make a new post when that happens. Look forward to it.