This week, we have been predominantly fixing bugs, making tweaks and extending existing features for the update this week. Details of the update can be found here. The first person animations missed the cut off for this release. They should be included in the next update. 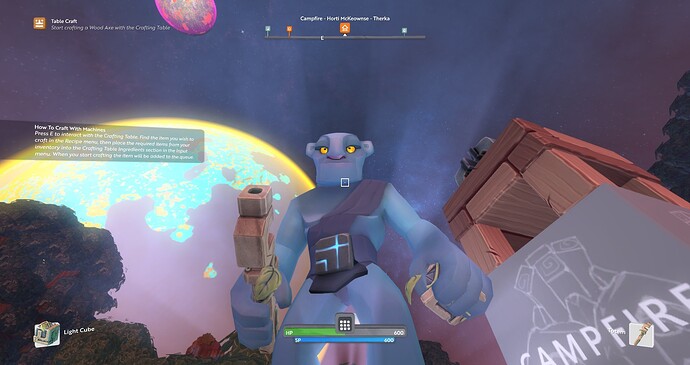 Over the next coming weeks, we will continue to tweaking objectives and making sure that attributes are acceptably balanced (proper 1st pass). This includes, properly updating the skill tree GUI. We’re still in the process of converting the GUI to the 1.0 design and features.

The Lance has been delayed whilst we’ve been working on the client prediction of more combat actions, this helps make the game feel more responsive. We have an asset for the Beacon Control and Campfire ready to deploy.

We’ve also been working on the Character Customisation pipeline so that we can test the different assets we’ve been creating. Hopefully this’ll be released soon we a subset of the assets for you to play around with and make your character feel unique.

Code
The foundations of the Character Customisation are being laid, building the mesh from a selection of body parts (face, head horns or crest, eyes and body shape), coloration and decals.

Stamina system has been implemented, so it is now drained by various actions like running and jumping. Jumping has been reworked to fit with the character progression. Further work continues on the tutorial and objectives. The skill tree, portals and warps have been reskinned.

We’ve added some first pass effects for item rank (when leveled up at the forge), and character status effects, e.g. when poisoned. Further sound effects have been added including the start of custom creature tier effects, making killing the lower level wild stock even more of a guilt trip.

We’ve improved boot up times, especially on PlayStation 4. Some long standing physics bugs have been fixed, mainly around the more complex shaped objects. (So no more walking along walls next to stairs - magic over.)

Art
This week the art team have been busy on decorative props, 1st person tools animations, hunter animations, prefabs and the beacon control.

Gerry has completed the animation set for the Hunter - our scariest creature yet.
Checkout all the latest animations in this monster post here.

Jess has shared the model for the beacon control - here.

Amanda has been iterating on the decorative pole concepts. She will share her progress next week.

As mentioned in previous posts we are building a library of prefabs for the worlds. This will make the worlds more interesting to explore. Here’s some latest work in progress pics of altars and shrines: 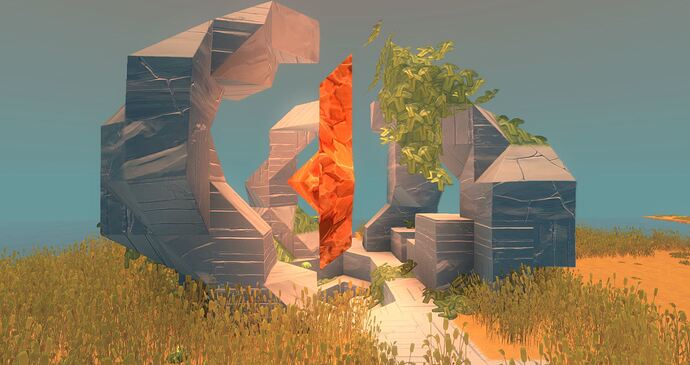 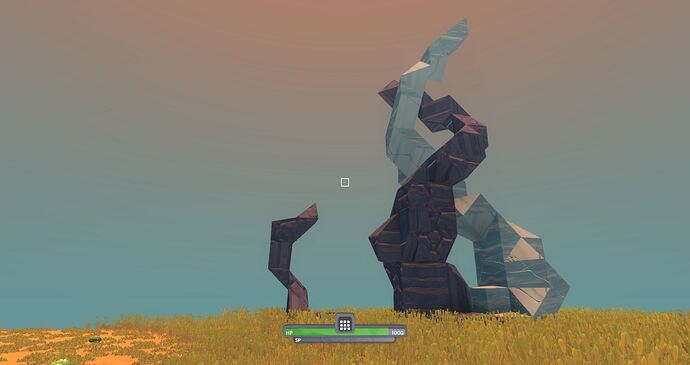 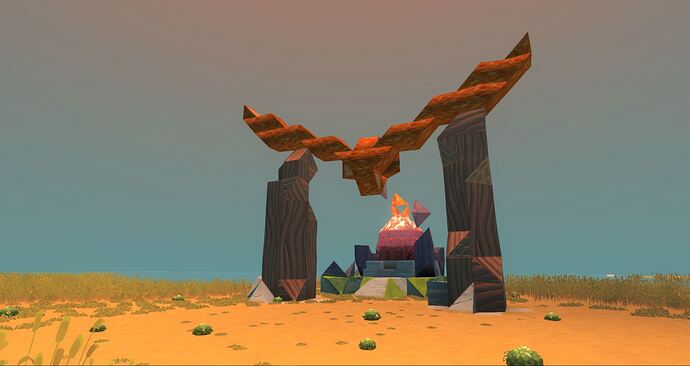 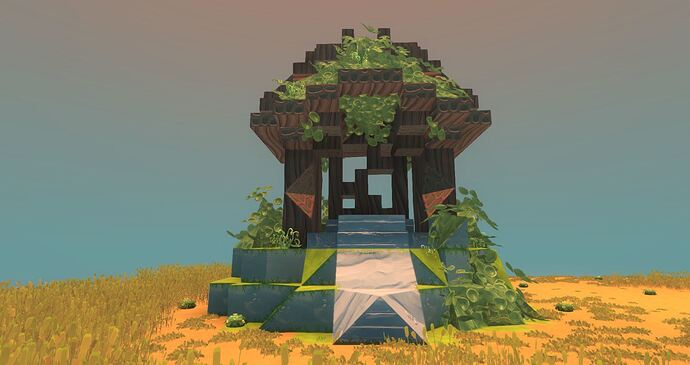 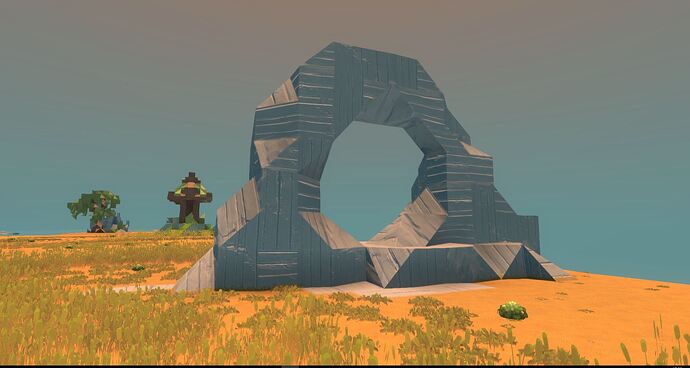 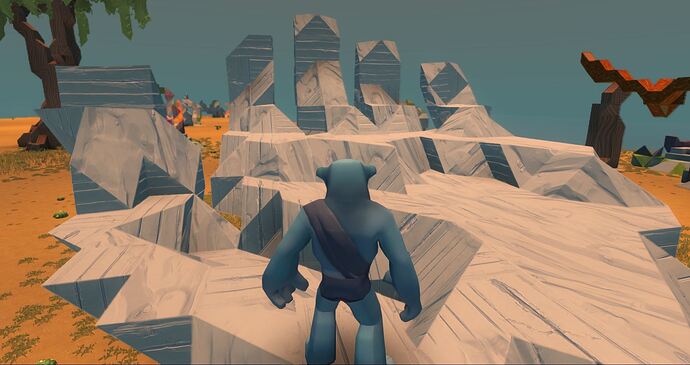 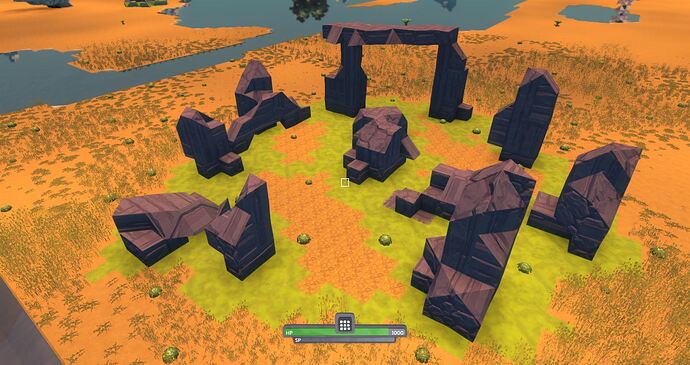 If you’re feeling creative please submit some of your own designs to include in the world generator.

I already got used to killing wildstocks with no guilt, you guys are getting worse than peta

Can’t wait to get the new beacon models in game … now, I just need to remember where I buried my beacon

… and a giant hand with five digits! Is that a clue as to who the Oort were by chance?

hómo oortiens were quite different than races we are about to play, 5 fingers is only one small difference

spiral and shinto are my favorite I must say

i like the overgrown feel, in Starbound, i always loved playing as Floran, plant people. all of their buildings are so cool

texture blending ads up to the nice effect like that; I really like the option and grass or leaves being displayed outside their actual blocks to a degree - helps cover the cubicness (I made up a word

but the leaf blocks in Starbound, when used as a wall, along with all the other blocks, simply form a feel i have not been able to encounter yet

I didnt play it so I wouldn’t know - unless you have some screenshots from the game that I could see - you made me curious about how Starbound looks like.

the leaf block doesn’t naturally pair with the stone except for one shrine i cant find a picture of. you would have to play the game yourself to actually know what it plays like, but it has amazing gameplay. its an exploration/creation game, like terraria, but less about killing monsters.

its worth getting. but let’s not smash on Boundless. so this will end my starbound comparison

ah yes, my brother plays terraria with his 10yo son so I had a chance to look at it a bit - I might have an idea how the gameplay shapes out

Gorgeous!! This makes me want to try on making prefabs again!