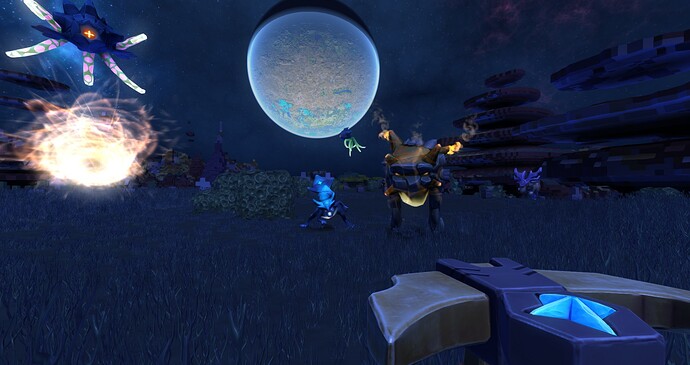 This update continues the development process of the Tutorial, Objectives, Statributes and Character Progression. This is still a work in progress. We know these areas still need much work before releasing them to Live on Steam.

However we want to share the progress with everyone to checkout and give us any and all feedback. We have thick skin! So tell us what you like, what you hate, and what you think needs more work.

All players have been reset. This means everyone has the chance to test the very start of the game including the tutorial and early objectives.

DANG IT @james, YOU’RE MAKING ME CHOOSE BETWEEN PLAYING THIS UPDATE AND DoW3!
Looks like it’s going to be a restless weekend!

Nice changes from what I’m reading so far. Will have to test this soon. Love the change in objectives. It’s not intrusive, but kinda guides the players on the advancing through the game, without being pushy it seems.

Different effects for slingbows seems like a nice addition. I’m sure new players will feel less overwhelmed with less objectives to choose. It will be nice to get the perspective of a new player perhaps. Someone that has a “virgin” boundless experience.

This looks like it’ll smooth out the first few hours quite a bit!

Just a little tiny thing after playing through first few levels: you may laugh how tiny thing it is but it only shows how much great polishing happened and I can’t find anything major just yet.

The first task - collecting the light cube - was completed before I picked the cube. I mean, I got the message and all before I reached the cube.

All the other tasks completion messages happen after completion, with perfect timing.

Crop Harvesting objective description says “plants gathered…”. In 161 it was completed by gathering flowers actually. Now it doesn’t react to neither flowers nor plants.

Heh, sorry guys this must be a noob question but how do you get the ‘testing’ version? I can’t find it on steam…

@Scratchnwiff Right click on Boundless in your library, select properties at the bottom. Go to the betas tab, click the drop down menu and select the testing branch.

Hehe thanks bro, helpful as ever

Whats the story with the super fast kinda nervous hits my character performs with tools? I must say I preferred less slower hits from 161. Is it because changes in the way skills are supposed to affect the starting speed of digging/breaking?

This brings an inquiry to mind; does this mean the next “live” update will be preceded by a wipe?

So i’m testing for 2 hours now… since 1h 30m i’m searching for copper on a starter world didnt found 1 in 4 different caves and on/in a mountain.

No Iron either. I really think you messed up the rescources lately

@Nibuls post your issues in this thread next time