This release contains all the features and fixes from the Testing 161 to Testing 166 releases, listed below:

i like everything that’s added but i will say that everything is much slower, sort of… less responsive than the original feel of, well i guess “powered up” characters.

It starts out that way, but it’s relatively quick to get past some of that slowness, once you start adding statributes etc. Some aspects of it are then much faster than the earlier “powered up” version. Definitely gives you a feeling of progressing though

harder to do that when the existing characters dont have all the objectives available. but doable later on i’m sure

Iron is again on the menu bois!

Why isn’t eating unlocked early on? You can kill critters but I can’t heal? That to me should be a base function once you learn to kill critters.

I may have overstocked a little in preparation for this release … 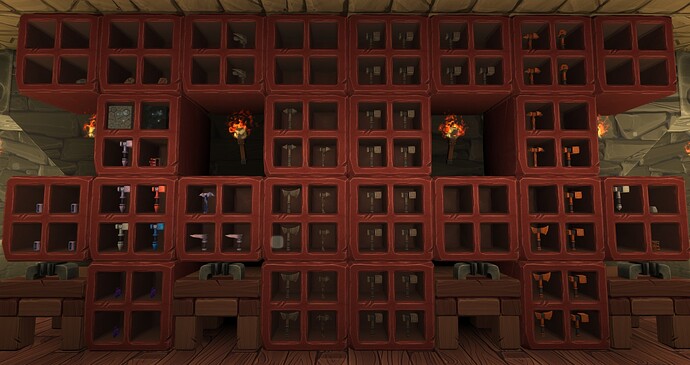 eating is unlocked just hold down for longer than the animation, like 4 extra seconds @Dr8cK0

Updated OP with details of a patch release.

I have a question, how many objectives slots are we supposed to have? I noticed the same issue we had over at testing, those with characters prior to the change only have 2 objectives slots.

Is the max 5? Cuz I’m currently level 8 and hold 2 objective slots. Sorry If I’m missing anything.

Or are objectives retroactive and tracking constantly now? And you just have those slots to have them on your hud?

Or are objectives retroactive and tracking constantly now? And you just have those slots to have them on your hud?

This … I think!
I’ve had a few complete without actively tracking them

I haven’t had retroactive, but the objectives do track whether you are tracking or not, you just have to manually claim the objective reward

I had only one objective for activation and no one completed. I think two slots is too much for single objective

Does anyone know if there is a cap on skill points? How many if so?

yes there is a limit you get through 50 levels - dunno how much but in testing there were many skills I couldnt get after reaching the top level;

all needs to be tested etc now and we will definitely see balancing in future - one thing for sure: you need to plan how you spend your skill points

Little hard to do if I don’t know how many I will get. But thanks for the information

You can always unlearn a skill if you have enough cleanse points. Select the skill you want to forget and click confirm to get your points back. You get a Cleanse each time you level.

Will there eventually be functionality to allow players to unlock all the skills, or was it intended to be strategic, in the sense that you would need multiple max-level characters to have access to all the skills?

It is intended to be a strategy to promote character diversity. If you want to master multiple areas you can either respec your character or create an alternative character when we have more character slots.