Please report all issues discovered in Release 167 in this thread.

Regarding the 166 WildStock of varying aggressiveness:

I think I’ve seen a pattern. In my latest starting point (somewhere SW of Horti Somm, IIRC), the WildStock are fairly benign. See the coordinates–my “old” place (The Estate) has very aggressive WildStock, while the Home/Cave of Doom area has much calmer WildStock. (You’ll also see a text rendering defect in the screen shots.) 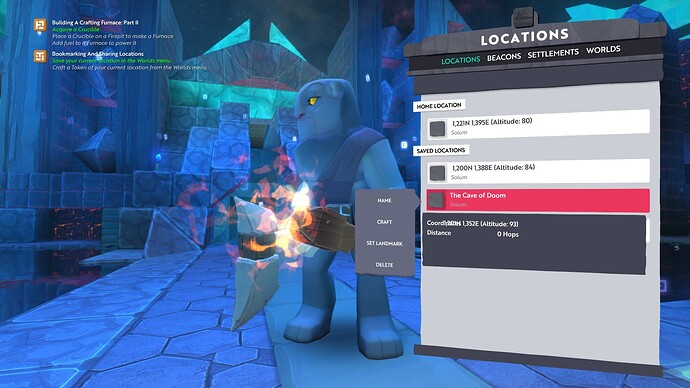 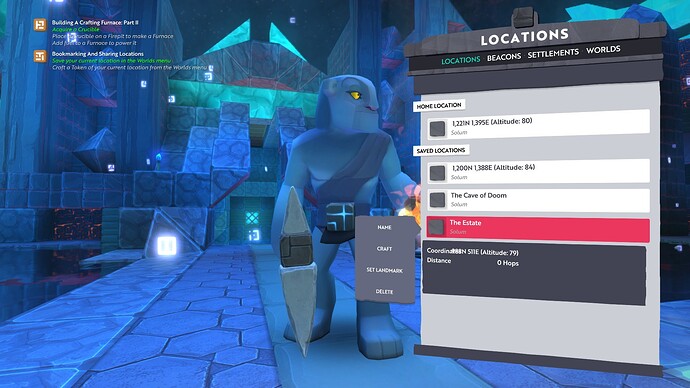 Some portals appear to be backwards, but that isn’t so much a bug, rather just a change that we can sort out ourselves.

Right now I’d refrain from using @Jeffrotheswell’s HUB until we can flip them around the right way.

There should be an option to flip or reverse them, provided the option is available. 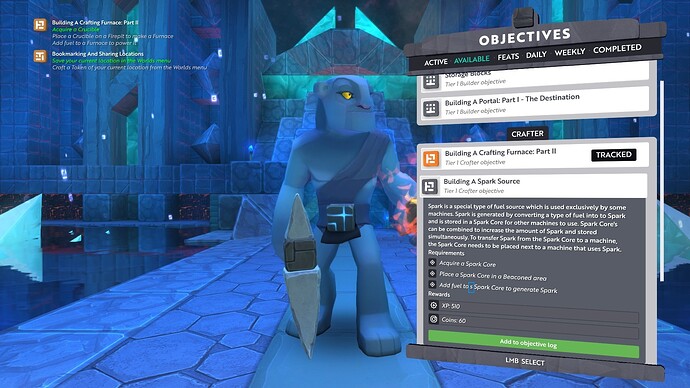 Regarding the 166 WildStock of varying aggressiveness:

I think I’ve seen a pattern. In my latest starting point (somewhere SW of Horti Somm, IIRC), the WildStock are fairly benign. See the coordinates–my “old” place (The Estate) has very aggressive WildStock, while the Home/Cave of Doom area has much calmer WildStock. (You’ll also see a text rendering defect in the screen shots.)

All Wildstock should attack players. If some do not, then it’s a bug.

As for the text issue, we’ll log a bug.

Whoops, thanks for pointing it out. We’ll correct it.

Try picking up items like a Workbench, Fire Pit or Crucible and that should unlock some more for you. There seems to be a problem with existing players not having access to the initial list of objectives after the tutorial.

Try picking up items like a Workbench, Fire Pit or Crucible and that should unlock some more for you.

Does not work for me.

Pick the furnance up… all of it, then place it… then go to objectives and claim rewards.

Oh I see, the objectives get added to the list after picking up the items.
I was expecting a objective completed message.

I completed all objectives related to furnace and worlbench pickup (except the ‘building a spark source’), but no more objectives after them. There are no more or any ideas how to activate them?

I am having problems trying to complete the Building a Spark Source objectives. Stuck at generating spark. It doesn’t want to complete.

I was standing and making something (for me very important) in a machine(a machine that i with much effort.build on my own, with parts collected over long time in the most unpleasant regions on the planet ), when a grumpy and maniac wildstock attacked and killed me from behind with no reason at all.

I have no doors in my base because i trust all creatures to be good, so probably the psychotic goat spawned near me and attack, probably because it had a bad day, for some unknown reason.

When thinking over it in the sanctum i get angry and switch to my slingbow to learn the faulty animal a lesson, and i went back via the warp to my wildstock infested base.

Back in my base the wild one was waiting for me and immediately start his aggressive dance with the clear purpose to kill me.

It was then i raised my weapon (That i only have to scare old women selling telephone subscriptions…) and fire at it, not only one but several times.

And then, the strange thing happens, when my missile hit him he took the hit and lose some hp, but after a half second hes hp filled up to 100 % again.

3 times he killed me, 3 times i return more angry every time while i try to hit it, the 4:th time i returned from sanctum he was gone.

Now i am scared to go out and have start making doors,
I will newer feel safe in my base again, so i demand you find the faulty goat and punish it hard.

2nd EDIT: I experienced that you should replace all machines, trading plinths, storage and a campfire/beacon to get more objectives (but ‘setting up a request basket’ and ‘building a spark source’ last objective goal still doesnt work)

3rd EDIT: can we have here or sonewhere in the forums get a list with all objectives and try to complete them anyway @luke-turbulenz ?

portals are really messing up with me. also, placing down a furnace asks me to “place s furnace”

i’m having a hard time picking up blocks. is that intended or not? i’m mining glass out right now, but they keep popping out with a lot of velocity and floating away (i’m in water) before i can even think about picking them up. there is also a delay between picking it up and the sprite disappearing