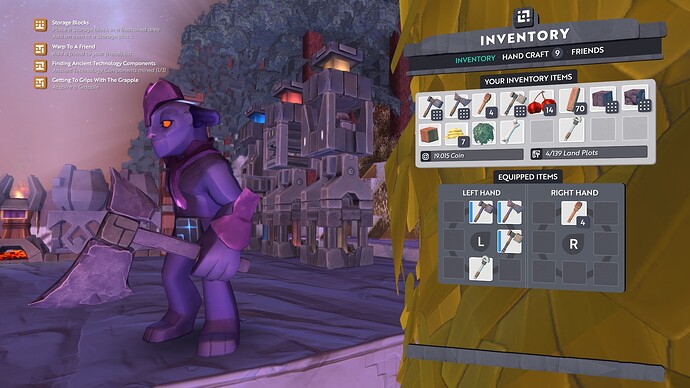 This release of Boundless is another step towards updating Live. We’re planning for the next Testing update (165) to be the Live release candidate. So feedback on this version is particularly valuable. The update includes improvements across the game and engine.

Please share any cool screenshots from the update with us, and I’ll attached one to the release note. Thanks!

aww but I like the name of Warp Locstion Picker Upgrade

Portal changes and warp crystal are awesome. Not that the others aren’t.

Where to?
Any interesting place?

Update: this is the issue here.

Edit: lol guess I should have read the comments first… this has been mentioned a few times already

Update: this is the issue here.

Minor correction to the release notes, it turns out that the teleporting issue can occur even if you are not mining, as demonstrated in the link provided by James.

Titanium now needs gold alloy or silver alloy (rather than both).

Totem Ammo now only needs base metals an a standard workbench (rather than gold alloy and a powered workbench).

Are the bugged objectives fixed yet? Like the cook meat in a furnace, gain “X” exp, smelt ores, etc.?

We still need to fix all the objectives that are not working, but the examples you have listed should theoretically be fixed. If not, report them in the associated thread.

It looks like a result of additional anti-stuck measurements.

And bug similar to that has been happening in World Builder earlier: when you place block and here is any blocks above you then it teleports you on top of the highest block above you

I seen the objectives for the bomb and lances. Bombs and lances in game are craftable now? What is the recipes?

If James didn’t mention it I doubt they’re in game. I think they’re trying to get the objectives system in a good place that makes sense so it’s probably just trying to frontload some work and whatnot.

Just for clarity’s sake, it should be noted this isn’t an update post but a testing release post. It talks about things that are actually on the testing server. But since bombs weren’t in game with the last testing release and aren’t mentioned in the first post by the dev team then it’s safe to assume that they aren’t in game yet.

I really like the stamina changes! The game feels much more fluid with this. Is there a possibility that it will regenrate at a very slow rate in future without using skillpoints?