This week we updated the game to include player made Portals. Have you built and used one yet? All the details of this week’s update can be found here.

The next big change you will see is the re-skinning of the user interface. As it is not easy to release the reskinning bit by bit, we will most likely update the game once we have the majority of re-skinning is complete. This may not happen until end of March. Also, by then, we should also have the following in the game:

Code
The portal code has gone live. We are continuing to refine the logic, including how the active portals switch and how much is visible through them to allow more active. This is a particular challenge on PS4 which has limited memory.

The Cuttletrunk is being upgraded with greater manoeuvrability and a new ‘drag attack’ that sucks characters (and creatures) towards it. If the Cuttletrunk manages to capture you prepare to go for a little ride.

The Attributes System is progressing with the Damage Systems and Items being upgraded. This means that it’s possible for us to create (and modify via buffs and progression) almost all elements in the game.

The GUI reskinning continues. We’ve also been working on the basic backend to support in game purchases such as private worlds. The PlayStation sign in backend is nearing readiness for initial testing.

Design
Below is a work in progress of the Boundless 1.0 GUI skin. 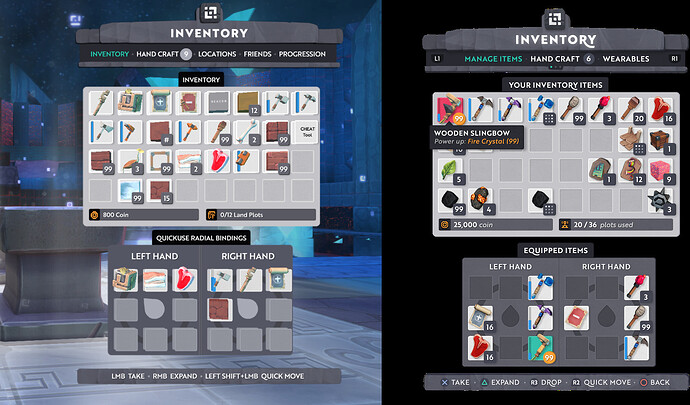 The current in-game (work-in-progress) version is on the left and Rob’s visual target is on the right. Rob only managed to point out 30 issues that still needing resolving.

We’ve also spent some time working on fixing the engine’s 2D distance rendering pipeline. Distance map rendering is a technique used in many games where sprites are converted to distance fields before being rendered with a custom shader. The advantage of this technique is that the assets are much smaller (so take up less VRAM) and give a perfect edge at any scale. This is a much more efficient technique especially when we need to scale the GUI and HUD up to 4k displays.

Below is an example Glyph in the source and distance map form.

We plan to migrate all the outstanding elements of the GUI + HUD across to this technique.

We’ve also spent the week iterating the new user experience. This included expanding the Sanctum with more tutorial objectives, a new set of in-game objectives and reconfiguring the initial stages of creating a beacon. We’re exploring the idea of allowing players to create single plot “campfires” that can’t be expanded and can act as temporary plots whilst you get the beacon crafted and placed.

Amanda has been concepting a set of six race 01 faces and a selection of full body decal designs: 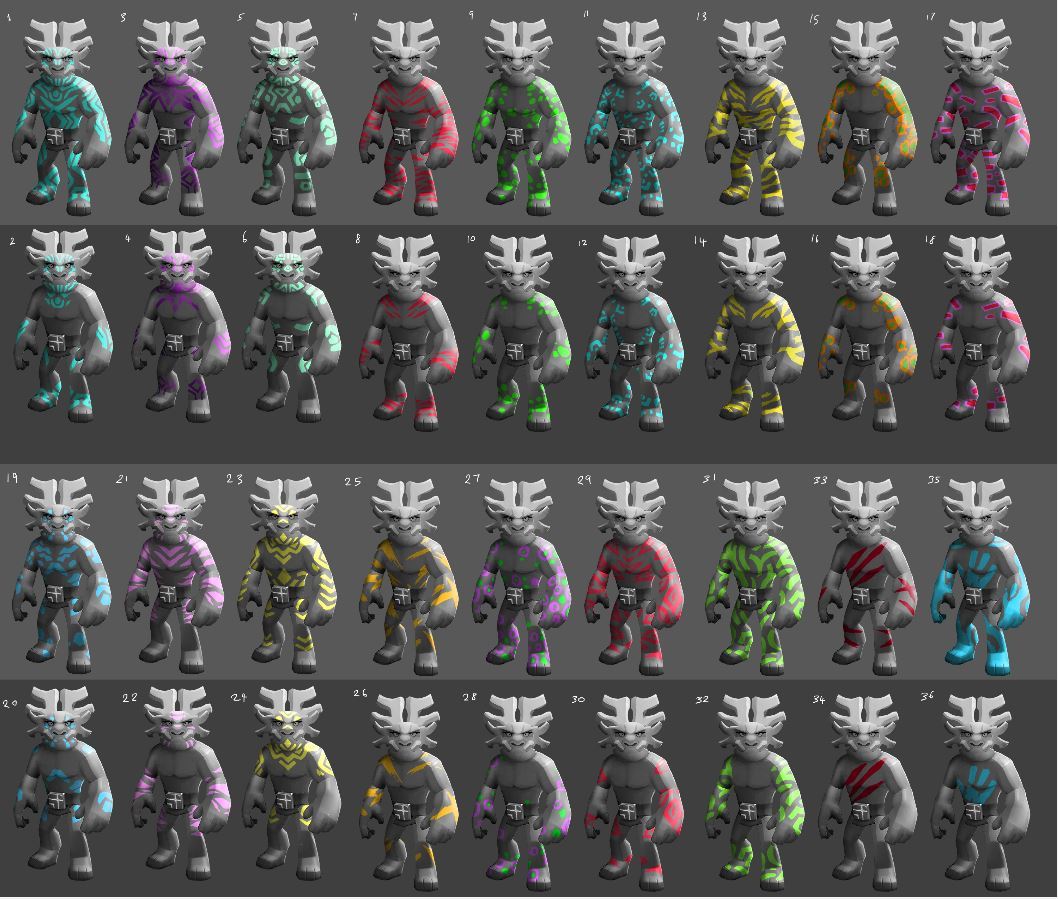 Jess has been building our second race 01 face. We’ll share this with you soon.

Gerry has completed final 3rd person animations for tools. These will be available in the next release. Here’s her forum post with gifs.

Saturday morning is the new Monday!

We’re exploring the idea of allowing players to create single plot “campfires” that can’t be expanded and can act as temporary plots whilst you get the beacon crafted and placed.

This is a cool idea. Should allow people to establish a temporary camp while they gather materials. Will it deteriorate or require fuel to keep the camp fire burning?

If the Cuttletrunk manages to capture you prepare to go for a little ride.

Hah that sounds like fun! I want to use the grapple to help steer

If a cuttletrunk catches you and you get him with your hook at the same time, who is taking who for a ride?

A post was merged into an existing topic: Release 157 - Report issues here

Gerry has completed final 3rd person animations for tools. These will be available in the next release. Here’s her forum post with gifs.

@gerryjacobs is a lady? It’s a sudden turn!
That’s what it means not to have an avatar =)

That’s what it means not to have an avatar =)

avatar wouldn’t necessarily tell you someone’s gender - who knows if James isn’t really a Fiona or a Lucy?

Seriously, I looked all Gerries on wikipedia and found only one lady among them - Geraldine Ferraro.

http://www.thinkbabynames.com/meaning/0/Gerry
It can used as a feminine name, it is just not very common.

Gerry is short for Geraldine. And we’re pretty sure she’s a girl.

We have a gender endings of verbs in russian language. I made a lot of mistakes by a last year in translations because I was sure that “Gerry” is a masculine name

You know Patrick and Patricia can both be Pat

Whats the story with Tan and Tanya? When I was very young a Russian girl called Tanya told me a legend about how Tanya was derived from Tan although can’t really remember the whole story.

Tanya is short for Tatiana. It’s may mean “establisher” in ancient greek (by “tatto” ~ to establish).
In another version it formed by musculine name “Tatian”, which formed by name of king Titus Tatius. So it mean “lady from the kin of Tatius” by latin. You probably listened this version by young Tatiana =)

I have a cousin which name is Tatiana. And this name hasn’t masculine form now.

The most part of russian names come from Byzantine Empire in X century. How I know, now we have only three names with clear means in russian language: Vera (a faith), Nadezhda (a hope) and Lyubov’ (a love). All of this three names are only feminine. Also we have some part of names with ancient slavic roots and some part of names as a legacy of the October Revolution and followed communistic period. But the lasts isn’t uses now, because it’s not so harmonious.

Lol!!! I go on holiday for one week and look what happens!??

Hello Okkelinor, nice to meet you! My name is a casual form of Geraldine which apparently means ‘to rule with a spear’!! Pretty cool but quite a mouthful - Gerry is always so much easier. Other UK female Gerry’s (spelt the same way) who are shortened from Geraldine include our fictional British sitcom heroine ‘The Vicar of Dibley’!! Another (probably more well known Geraldine) is Geri(spelt a little differently) from the Spice Girls.

Mmmmmm - despite this, I ‘may’ change my avatar to something more personal than that lovely purple ‘but yet oh so mysterious’ G.

In any case, I basically animate around here and always try to inject as much character and feeling as I can.

Thanks @Stretchious for giving the 3rd person tool anims a bash - they are fairly utilitarian with all the blending going on but they do the job until I can get some engineer time to polish them more.

I was a bit confused because you havn’t avatar and full form of name in a site where you represent yourself as a professional not just “a cute girl who makes your lovely game”. =)