What type of automation do you think is viable for Boundless?

When it comes to automation, you have to remember that this is an MMO with an economy so we can’t have “build and forget” automation. However, I think there are a bunch of areas that could benefit from some kinda of automation, here are some of my ideas, feel free to leave your suggestions below (keep in mind the MMO’ness and it can’t ruin the game

(I understand we haven’t got many ‘things’ to interact with atm, so I’m gonna use doors for my examples, room to add more interactive things)

I don’t know about limitations to do with the server, but isn’t that plan for us to be able to make flying ‘somethings’ from loot we get from Titans in the future? So I guess the limitations aren’t super tight

All sounds great to me

Centralized machine interface, or some form of processing raw materials into finished products. No speed boosts, no added efficiency, just let me click craft power coil if I have all of the raw materials and it queues the previous steps (bars into machined blocks, into furnace bases, into coils). Some type of queue system that is deeper than a single craft and is across all machines if connected. Or even the ability to connect multiple of the same type of machine together so that I can open one GUI to start crafting 300 mass crafts across 10 machines instead of running all over the place to craft 30 per machine.

Also boats and off-road vehicles. Surely I can compress those ancient tech and some metals together to build some sort of transportation. Shove some oort in the tail pipe and rock & roll.

Oooh I like this idea a lot! Would open up some pretty cool crafting area designs, basically making a bigger machine out of machines. Link a compactor, a refinery and a workbench together and you have your own little Power Coil making station - get all the raw ingredients and you’re set!

Also boats and off-road vehicles. Surely I can compress those ancient tech and some metals together to build some sort of transportation. Shove some oort in the tail pipe and rock & roll.

@Ovis I know you’ve seen this post, but I would like to link to it here too since it’s right in line with your OP.

My biggest gripe with Boundless crafting isn’t the time it takes to craft items, but the wasted time crafting the materials for complex items, and then transferring those items to the next machine to finish the item. That’s where this suggestion comes in, the Material Transfer Tube (MTT) works like a spark cord, but for items. The idea is, when you set up your workshop, these tubs transfer the output from one work station to the next automatically, where that workstation is waiting for the input…


I’d also like to see automated storage systems and retrieval systems. For example, I’d like to be able to press a button and receive a hammer from storage, then drop said hammer in a reciever and have it returned to storage. Or, drop my raw ores and have them sorted by type and automatically begin smelting.
3 Likes
Ratchel August 3, 2020, 5:28pm #8

I would definitely love to see an auto sort system. Adapting the reclaim system would be possible? Advanced locks that instead of friends it locks a box to an item?

Eh, I want to avoid “magic buttons” like the reclaim system. I would much rather build a complex machine with physical connections and clever logic and sorting tricks to achieve the end result. That way, when you see one in-game, you know you’re looking at an advanced feat of engineering.

I just don’t want a 100 plot sorting compound lol. Current storage we have is chests for every item type in game. Even rocks and stone.

Thats fair. Perhaps that’s why they haven’t pursued this further. But, personally, 100 plot super structures of actually functioning components is my dream. Different tastes for different people I guess.

This. It is a real pain when you have more storage than you know to deal with and, even if you have it sorted, you sometimes just can’t find that one thing you know you have.
I propose a sort of sorting-and-dispensing machine that will allow you to search your own storage (by item and tint) with a search bar and grab it, without having to go find it in whatever chest you put it last!

Maybe the machine could involve hooking up tubes or links of some sort to each storage unit back to the machine itself- and coils could increase the machine’s link capacity.

That’s the adaption I was thinking of when I was speaking on reclaim. Using that type of display/search function connected to a mass set of storage.

you know you’re looking at an advanced feat of engineering

This. Something to separate the engineer-heads from the non, I want to be given the tools to create these types of builds, I don’t want to be given a preset machine that does complex things necessarily

Oh no please no, I like progression and certain complexity in the game but not for something that doesn’t need to be that way.

I’m ok if we end up needing a sorting machine but that’s it, just one block or 2 that make the machine and all we need to do is place the stuff and then we take it out sorted, it would be freaking painful to have a forge 2 just to sort stuff. In that case we may as well keep it manual

I think he means a mixture of blocks used in a creative way, not another machine that you need get coils and stuff for. So you could make it simple and small or if you want it bigger you can make it more complex.

Like how the auto storage stuff in minecraft came about, purely by the community and not influenced by the developers

pipes to move large quantities of stuff between storages or machines.
pipes for liquids, pipes for items… hopper pipes, hoover pipes, sorting pipes, portal pipes and big pipes for player travel
…it is a pipe dream tho

…it is a pipe dream tho 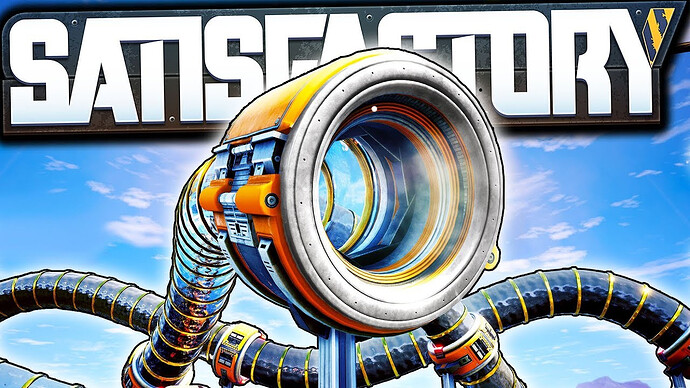 Don’t worry guys, I flagged this as off-topic myself so you don’t have to

Also @leader please feel free to split this post to a new topic for being off-topic as it does not have to do with automation in Boundless. Thank you!