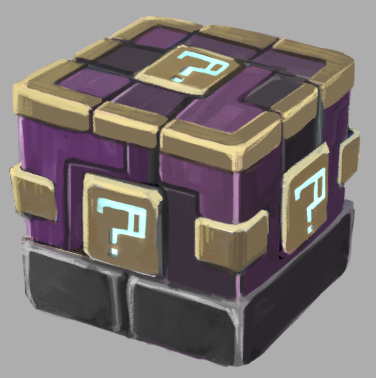 The mystery box, a purchasable item which will give you wearables. Fancy!
Base design of the cube shape is off Claudio’s original chest design. 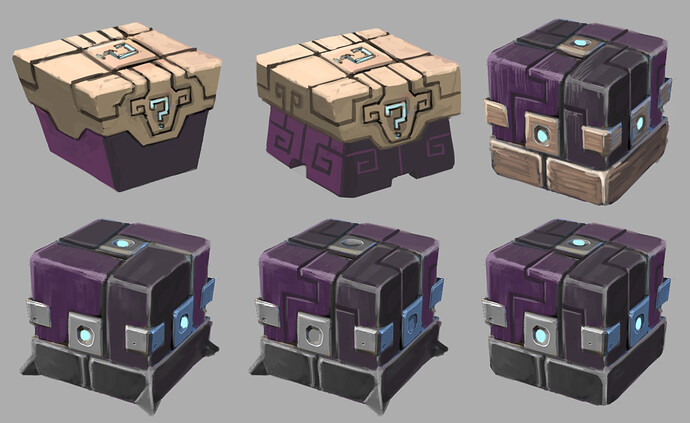 About the art: None of these strikes me as particularly outstanding but nice designs nonetheless.

I have a feeling that if its cash shop you are going to have a VERY bad time. Alot of people are tired of RNG skin boxes (i think they are cool if not too expensive and you can buy the skins anyways) but if that is the only way to get them. not quite.

I prefer the first design but with a “wardrobe” icon on it (shirt, hat, feet, anything) instead of a question mark (which implies to me a completely random case)

If they allow both buying random boxes or the same available items for a slightly higher price I don’t think it is going to become a problem.

Looks good to me!

Personally I wouldn’t buy a random item with real world money, but for in-game money I could be tempted to!

Even if i don’t have a lot of time right now i like to agree with @Zouls. If this is a real money item i’m 100% against it. As i said (a lot of times before) i reject the idea of real money cash Shops.

Even if i don’t have a lot of time right now i like to agree with @Zouls.

I have a feeling that if its cash shop you are going to have a VERY bad time. Alot of people are tired of RNG skin boxes […]

Just for clarity. I agreed with this statement but i was not able to quote correct as I was traveling.

Even if i don’t have a lot of time right now i like to agree with @Zouls. If this is a real money item i’m 100% against it. As i said (a lot of times before) i reject the idea of real money cash Shops

I never said that. Actually im for cash shops since they are the best way of keeping revenue for the game as long as they are not p2w. my problem is just a RANDOM cash shop item would be a fairly bad idea.

if they are found outside and to be opend without any real money purchased keys I would take one of the upper row, #2 looks good. But if they arew for real money keep your designs and move along. No place for those in this game

If I want to have stuff for money I will chose which I want to get. Random is nice when for free, not for money!

No place for those in this game

Why not? They are a good way to make money and don’t change the gameplay at all. If you don’t want them just don’t buy them

for some small funny boxes they draw a deep and vast shadow. For many people such “possabilities” are enough cause to NOT buy or play a game … Normaly I’m one of those

I’ve never seen a person who wouldn’t buy cs:go or overwatch because of the lootboxes.
And why does it even bother you? It’s not like those skins give you any special powers

I thinks those will be purchaseble with real mony, prepare your credit cards guys

I’m generally against micro-transactions that lead to random rewards, especially if it is the only way to acquire the items they contain.

As an avid collector of ‘stuff’, I just don’t like them on a number of levels. In any MMO I’ve played that uses that sort of system, it’s been the primary reason for me leaving.

Firstly, it usually all takes up space, which often ends up being at a premium (Actually, SWTOR handled this really well with their ‘collections’ system). I don’t like having to make alts that end up just being mules to carry all the junk my nature makes me unavoidably obliged to collect.

Secondly, irrespective of the size of the player base, there will likely never be enough of them available on the ‘open market’ for your to keep your users happy. Unless almost everyone that plays doesn’t care about collecting things at all, or everyone that plays is wealthy enough to be throwing money at the game. While this does promote desirability of rare items, the point that I start losing interest in a game is the point where I realise however much time I spend in game, there is something that is essentially inaccessible. If I’m missing one part of a set and I could just buy that thing on it’s own though, it mitigates a lot of my issues with it.

Thirdly, it introduces a method for people to legitimately pump real money into the game to progress. Buy boxes, sell boxes for in game currency (Or sell contents of the boxes). Usually, this is considered an undesirable feature, especially when gaining power is potentially derived as much by what you’re wearing as by how much you have progressed your level.

I’m glad you remember that!

seriously i want to know what wearables to look for

My opinion on this is that as the game is buy to play, you should go the overwatch route, but make the items drop as something that can be consumed before use so they can be traded. The only other thing to add is to make user submitable skins.

EDIT, changed pay to play to buy to play,

I’m a fan of the way Overwatch is doing loot boxes, personally. Though, I am not sure I see how that system will fit into what I have seen in boundless so far. OW boxes work because there is no level cap, and you get a box every time you level up. Will these perhaps be purchased via both earned in game currency and real money? I would like a system that allows a player to earn currency for boxes in game or purchase with real cash.

Whatever it is, i dislike the question signs. They are not “boundless”.

If there should be something on it, write the word “random”, “surprise”, “luck” or whatever in oort on it.
Or invent Oort signs for . ? and ! and then put the oort alphabet ?-similar sign.

If non of this, i prefer the ones without the “?”.

However, the question signs really remind me of super mario coin blocks. Not good!