At the suggestion of @ciprianb , going to keep a central running thread here for my planets, so the info is all in one spot. Especially with Gleambow next month, when I plan to throw some extras out there, probably better to have it this way, rather than cluttering up the board with new threads and having the info all scattered around. Will try to keep this up to date, editing this first post with changes to what I have out there, deleting and adding. Won’t include a few here that only have a bit of time left on them.

Any that say Temporary, except for the Gleambow worlds I’ll be doing, I give permission for you to ask for transfer if you want it, just copy me in on the PM to the devs so I know! Any permanent that reaches less than three days before lock without fueling, also permission to transfer – “Permanent” here means, “As long as I can.” Money gets tight or something, might have to start letting them go, in which case they are fair game if anybody wants them. I think the permanent marked ones will be fine for a couple months at least though.

Notes on some of the builds are here - World "Builds" thread But will include some other comments in some of these.

Any questions or requests, ask away! I tend to lapse on the atlas stocking sometimes I know, but for the T6 Alcyon ones, I have them all in one place now at the hub so hopefully I’ll do better.

Planet: Hyrule, T6 Blast
Status: Permanent
Access: Paka’s Palace, Alcyon
Notes: Great for diamonds and hard coal, pretty good on gold too. If going for diamonds or topaz, Olympus, a lv. 8 biome, alone will provide you with very nice spots. I found it may actually help to sacrifice a few of the high level biomes that are smaller in area like Mount Doom, as it can result in larger overall spots from others merging. This one is open to claiming, if I have to start cutting back on worlds this would be the last I’d let go.

Planet: Proserpina, T6 Corrosive
Status: Permanent
Access: Paka’s Palace, Alcyon
Notes: Most profitable of the mining types I’ve found, by sticking in amethyst spots near or overlapping with emerald. Some decent collecting here too. Most my T6s have Island Trees – farm the canopies for some easy profit off beans, shimmering orbs, and glowing lamella. Has a gleam farm.

Planet: Stellamaris V, T6 Toxic
Status: Temporary (see next entry)
Access: Paka’s Palace, Alcyon
Notes: Combination Emerald and Hunting planet. Gleam Spiral makes for very efficient Roadrunner hunting, and if you are like me and have a little trouble sometimes with seeing at night in the game (mainly on PS4 this is an issue for me) it helps that it is lit up at night. Emerald areas pretty bare of other stuff but great on the Emeralds.

Planet: Stellamaris VI, T6 Toxic (added 2/2/21)
Status: Permanent
Access: Paka’s Palace, Alcyon
Notes: See next post for reason, but replacement for V that is the same (hunting and emeralds) but better on both. Nice building sites too, I might open it to claiming.

Planet: Snowball, T6 Burn
Status: Temporary
Access: Paka’s Palace, Alcyon
Notes: This one I might try to reroll, as I found a better build for rubies than in the builds thread. Turns out Ancient Village at lv. 7 is as good as or better than Graveyard. But I likely won’t do this right away, as it has a bunch of time on it still, I’ll wait before trying on this one. Edit: Rerolled.

Planet: Desolation, T6 Chill
Status: Unsure
Access: Paka’s Palace, Alcyon
Notes: Great Sapphire planet, not sure if I’ll keep it around any longer than the month though.

Planet: Leprechaun, T3 Lush
Status: Temporary (Probably)
Access: Paka’s Place, Gyosha Ophin
Notes: Set it up for Gleambow a bit back, good for regular hunting as well so keeping it at least through the main Gleambow. Easy terrain, and ten or so platforms set up so far.

Planet: Aurora, T5 Chill
Status: Temporary
Access: Paka’s Diamond Mine, off TNT Serpensarindi
Notes: Portal is to a stretch of Island Trees, another portal there to a great hunting grounds area. Some nice sapphire spots around, this is a good T5, worth a visit while up.

22 Likes
Sovereign generating questions
Help for returning
Is there no way to choose resources when making a sovereign world?
bucfanpaka February 2, 2021, 7:31pm #2

Haha, good thing I did this thread now. Have an unplanned change coming, figure I’ll post about it before starting the changes and editing the original post, to give you all warning.

I mentioned in another thread, but for those who didn’t see it - had a glitch a bit back where a rental didn’t pop. It popped after maintenance today, it was a toxic that landed on Alcyon, and right now looks better on nearly everything than Stellamaris V.

Big, ideal Gleam Spiral area, interesting gleam monstrosity that will make for a nice farm (pic below), and good emerald spots. So this one is VI. I’ll leave up the mine portal to V, but otherwise will replace the portals to that one. If anybody though thinks V is better than VI, let me know, I really don’t mine the toxics much myself, so if you all want that one I’ll keep it. 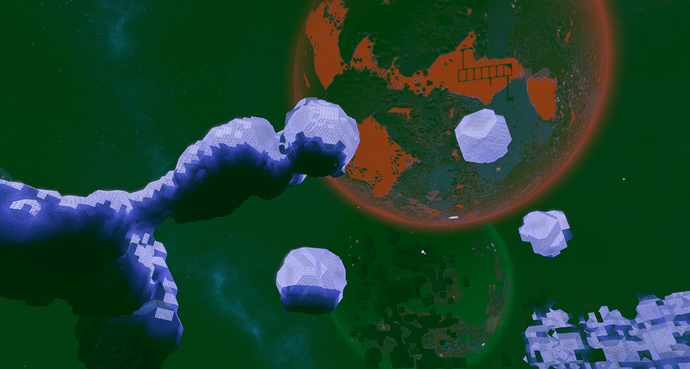 so this is stellar 6? Yes, I see it now. What about The Ordinary Princess? Is it still out there? I just saw its amethyst count!!!

Other planets get new names but I like this name a lot so kept it for whichever my toxic was.

The Ordinary Princess I think belongs to @PrincessMaude?

Another good thing about VI here is, there are a few nice islands in emerald zones that are flat and not many trees, beach biomes I think. They would be wonderful for building. I might open this up for claiming after I claim what I want.

Got one portal up yesterday, will try to do the rest today. Might have to disappear for a bit here though for a time, as a heads-up. Found out my mom got COVID, she was in really bad shape anyways, bouncing between ICU and rehab facility.

Very high risk. If I have to leave, still should be able to check in here but might be off the game for a bit and not able to stock or anything.

Thoughts with your mom. Be careful out there.

No that’s not my planet.

Sorry to hear about your mom, hope she gets better

Thanks both of you, really appreciate it!

Apologies on getting that planet wrong there! If whoever owns it sees this, could always try to make a spot to a portal to it at my hub if wanted.

I see on the scanner someone rolled what I THINK might be the best ruby T6 yet. Leaning more towards trying again there, but going to wait a bit still.

Tarnation is one of mine. It’s wide open to anyone (like all my worlds) but leave me some choice spots if you please.

I love the name there too!!

Congrats on the roll!

You were probably the one who unlocked the Light Fuchsia on the Glow Caps then - thanks for that, that will look lovely on my victims… er, my innocent fungi that I’d never DARE chop up…

I’ve got the atlas done if you need them, can stash some somewhere for you. Went ahead and explored the whole thing as I wanted to see how all your biomes did. Does seem like your best results were also in Ancient Village areas. Got two places where Gleam Spiral is right by some great ruby area, I saved those spots.

When I get around to running another test, there is one biome at lv. 8 that intrigues me, the one with the horrible ice spike valley, forget the name. AWFUL biome to traverse, but I sort of wonder if it might be good for rubies.

I may try it as there really isn’t a good lv. 8 ruby biome so worst case I get a few useless areas with it I suppose.

Original post edited to show new experiment up. Some notes on it-

Named Sakura as the colors the RNG rolled made me think of cherry blossoms. And like the Sakura, it’s lifespan is short!

This was an experiment to test a lv 8 biome, that part was a big fail, but the planet is definitely worth visiting while it is up. Good ruby spots in places, and I put the portal to a really great hunting area, and have some atlases up there. Have several areas of Gleam Spiral broken up running east-west here. One break is lava lakes with Gleam Lantern - Tarnation and Belenus have this too; this creates possibly the most ideal hunting out there if solo, since you’ll be able to mop up loot from free kills as you run back and forth (video showing it below, along with pics).

Sorry @Soju-VB - another name change here (whenever, no rush), that Corruption planet is winding down so used the portal for Sakura. I’ll keep this one up the full time though, thanks! 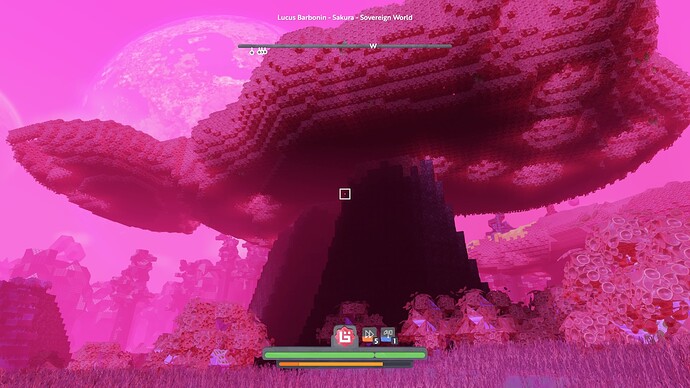 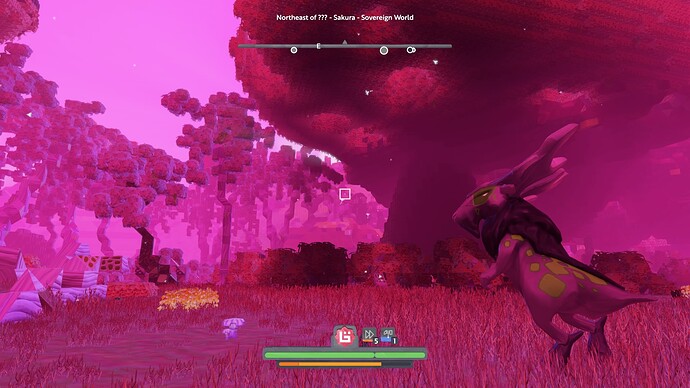 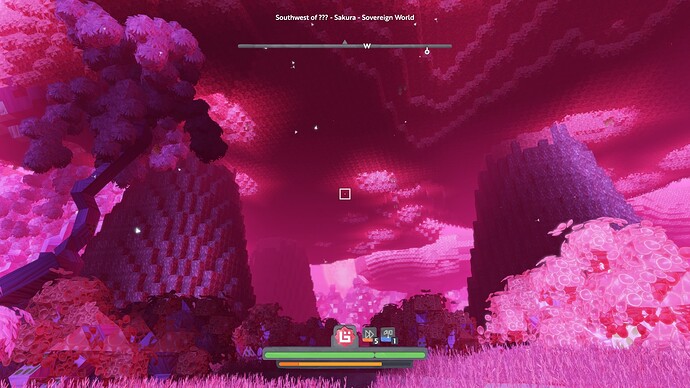 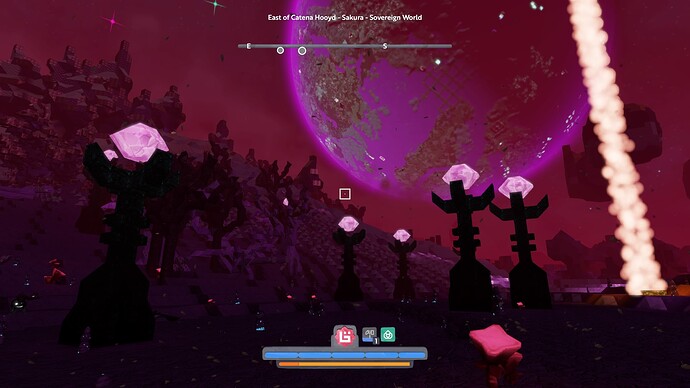 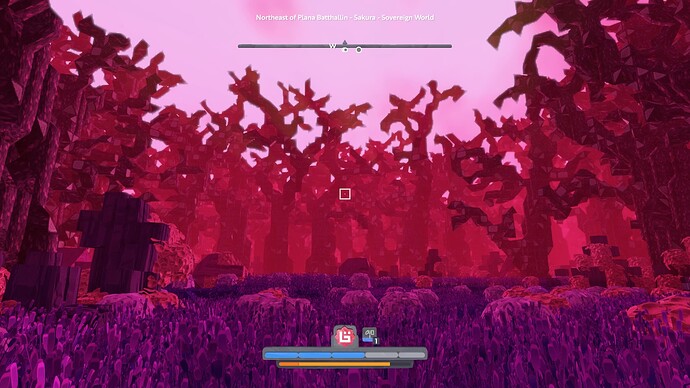 change has been made… let me know if you would like it to read differently. 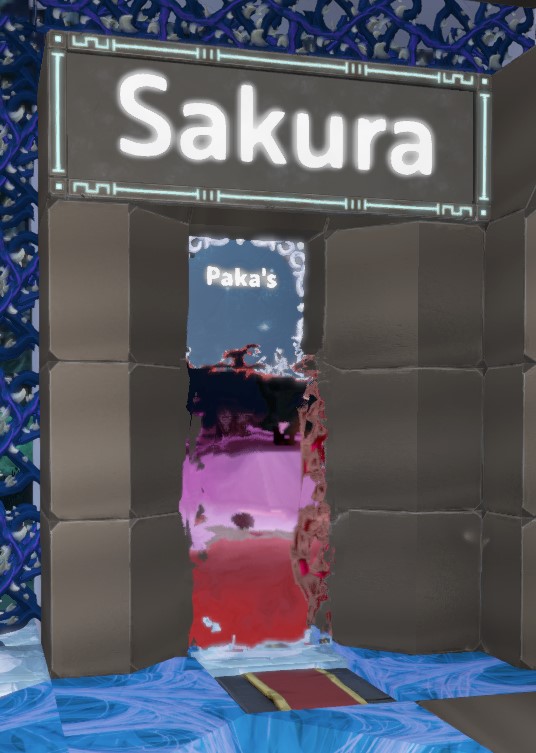 Since this is sort of a multi-use one, planet name works well here.

… And I appear to be gaining more of a reputation for these! Made my day to recently in game get a compliment from someone enjoying a couple of the other worlds I put out there.

Got lots of Snowy Redwoods around - those are great sap farming, solid, and sometimes in clumps.

Can grapple to the top and chop your way down!

I took a look at my portals and easiest spot to get to them from is probably the Help Me! - Gleam Farm portal there, there are a bunch on a shore nearby. I know Stardrop Valley has a bunch too. There are also some not too far from the temporary toxic portal I have that is linked to TNT Norkyna. I think the T5 Corrosive I have up may have some too, that is linked at Paka’s Diamond Mine via TNT Serp.

Going to update the original post when done, but for those interested, I’ve got a new experiment T5 Chill I’ll swap out one of the portals in the Diamond Mine for, this one is pretty great so far.

Huge Island Tree area, massive gleam spiral/lantern hunting ground, and some good sapphire spots around. Planet is Aurora. Sort of a purple and pink scheme here. I had gotten a compliment on the other T5s, so figured if I’m going to play around to entertain myself here maybe I’ll do these occasionally. 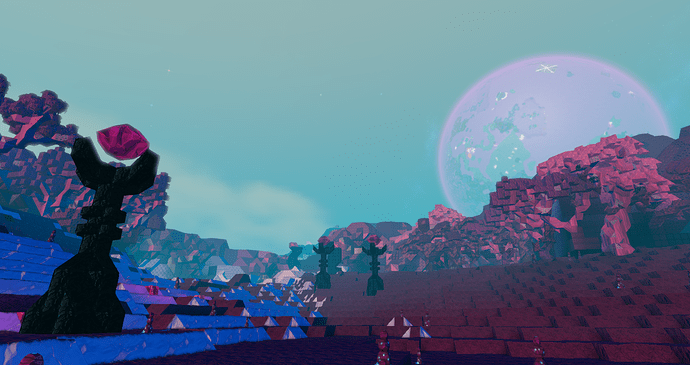 The huge trees have actually mostly stone inside. It is just the shell which is made out of wood. That is how it is on Hyrule at least. Is this one different?

Those are the Island Trees with the stone inside and big canopies. The better ones for farming sap and trunks are the Redwoods - here is what they look like… 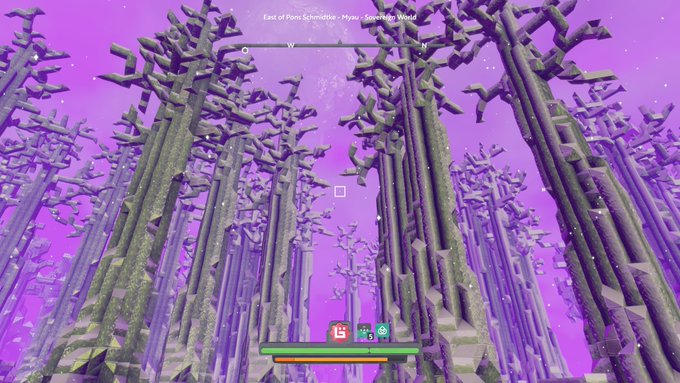 … The portal I just opened from the Diamond Mine to the Island Trees on the new T5 has a bunch of Snowy Redwoods right by it too.

Actually I find that island trees are excellent for farming sap. If you go just under ground level, you can make multiple passes with a 3×3 axe and get quite a good amount of wood and sap per regen
I will make a video to demonstrate lol