Underground smoke happens often, when it does, I can barely see anything around or ahead when mining.
I dont know what caused the smoke, maybe its raining outside above ?
Please reduce it. 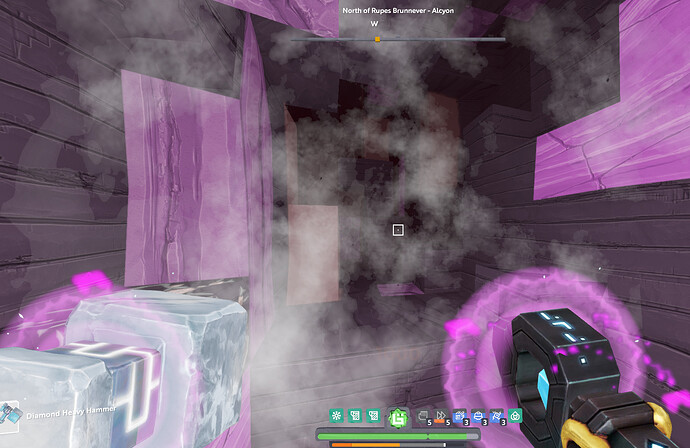 It’s annoying as hell, I had a lot of it on Cardass, but yeah, that’s part of the fun haha

I posted about it here as well:

@lucadeltodecso seemed to take some interest initially, but not sure if anything came of it!

It gets bad even in my house on Sorissi sometimes too. I think it could use to be toned down across the board.

I get this inside our dome on Gyosha. Sometimes can even see a plot in front of me

Yeah, I get it on Boori too, which is not an extreme planet, can’t see properly in my base, that’s the case I wouldn’t say is appropriate, but devs will tell that it’s all very complex weather system and we just don’t get it

I think I’m the odd one out. If I could disable all weather and effects I would. I’d prefer not to have them at all.

I like the weather effects too, but not inside my house!

All I really was asking for in my post was to turn down the light glare on the fog, seems to only be when using client side light sources.

I kinda agree it is what it is. I think a lot of fog is ok. It’s just how it displays as if we are wearing goggles and they are fogging constantly. Also, does anyone else find it quite annoying how short the threshold is for transitioning from day/night , rain/clear ,ect.

how short the threshold is for transitioning from day/night , rain/clear

wdym? Like how it doesn’t taper off, it’s abrupt?

we need lighting and thunder effects!

This would be very

wdym? Like how it doesn’t taper off, it’s abrupt?

Heh, you should try a winters day in Scotland, the transition from daytime to full dark is kinda ‘blink and you miss it’!

Lol only because of terrain. The earth rotates just as fast there lol.
Well wait correction, it does change based on position on a planets hemisphere.

This thick fog also happens on lower tier planets like AntarVI. Granted it rains most of the time when this happens. But that should not effect ondergrond builds in this way but it does.

Location i am talking about was originally water 2 plots deep still i can understand why its thick there but locations underground (closed in) shouldn’t be influenced as much with weather than is.

Point being fog is to thick to make sense in some locations and you don’t see anything while its there.

This happens to me in Raxxa with the plots that are under the ground level of the terrain with 3 block height levels … but i have plots that are down at 8-16 alt fully cleared out and it doesn’t happen???

I honestly hate the lower fog junk because it messes up my ability to see i wish i could turn it off as it doesn’t add anything to the game for me.

nah, not actually fun at all. it’s freaking blinding. the brighter your light source, the less you can see. seems backwards to me. (not that the fog should be brighter/darker or blinding anyway)