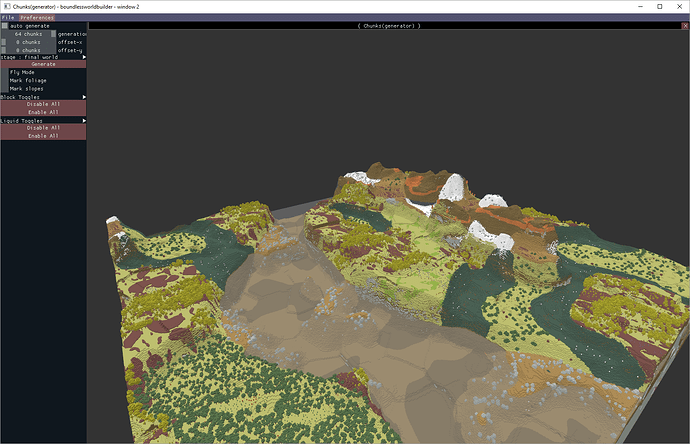 We plan to release new updates to Boundless into a “testing” beta first, before promoting them to the main live version of Boundless. This allows us to publish features earlier whilst still maintaining responsible stability on the main version. The “testing” and live versions of Boundless do not share worlds.

Please explore the new Boundless World Builder features and report any issues. @olliepurkiss has shared some details about how he’s been working with the builder. We’re excited to finally start creating a biome and noise building community and standard library. We’ll share some ideas for this in another devlog post soon.

Share anything you create and let us know what you think.

Also, thanks, I guess I’m calling in sick today

Decoration and Plantations nodes are now merged together, with 3d noises changed to 2d noises to describe their placements, and split by surface type (cave, threed, surface).

Noise seeds changed to an editable text field, choosing the same seed will gave the same Perlin etc noise generation, including exposure of the seed on components of Fractal noise nodes.

Oh, thank you! No more screwing around in the world file to make/tweak nodes w/ the same seed

Nice, you just crashed my weekend…

How are world builder servers discovered? I’m able to see the local instance, but not for any other machines on my network

resources do not yet drop anything.

when they do, my family and friends will know where to find me hahaha.

First question, is there a way to have visualization in separate window instead of tab?
I like to see what i am doing.

right click the tab and there’s an option to move to another window.

Note, a great advantage of tabs, is any tab in the background will not auto-restart it’s generation when the relevant graph is modified until you make the tab visible, so you can have 10 different visualisations, but the only start costing any CPU on generation times when you switch to the tab

Hmm, how do you clear a connection? ctrl- or ⌘- doesn’t seem to do it (on the OS X build at least)

Lots of things are now on right click, so if in doubt try that.

Visualization in the tree-generator is gone, any way to see the trees when fibbling with the settings, without to regenerate the world (biome)?