This week, we have been busy preparing to release the hugely updated World Builder and Resource Regeneration. After several bumps on the road, we finally released the update on today (ok last Friday!) All the details of the release can be found here.

Note that update is currently available as a Steam beta under the name Testing.

Players are already beginning to create some great and original world concepts. For example, this by @Heureka. 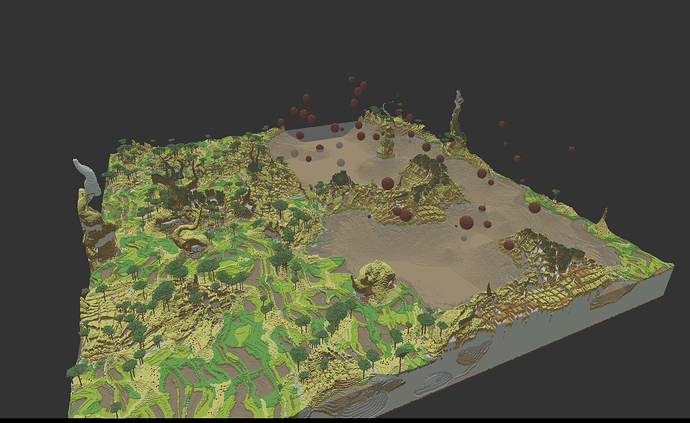 We still have a few major features to release. They will be incrementally released over the next few weeks. Hopefully this style will mean the code is more stable, the updates will be smoother + faster to execute and will allow us to pin down causes of bugs faster.

Here is what we are aiming to release in July.

In the background we’re working to update the entire game to support the Wrapped Worlds generated by the World Builder. This is a significant change and will hopefully be release in early August.

Code
This week we’ve been adding a beta branch on Stream for deploying versions before rolling them across to the main release. For this we have been updating our server deployment to make it simpler.

The World Builder has been polished up to add features to make it more accessible. The Resource Regeneration is now in game, though we need to add drops before they can be harvested.

The Machines are also been polished adding in features for usability and dealing with some edge cases. The GUI has continued to be polished up with hand crafting added. We are also working on some 3D clipping in the GUI shaders for the scrolling lists. The GUI for dual wielding is also being implemented.

We have integrated the new shader pipeline and worked on resolving the issues it exposed. We have also worked on how entity data is broadcast, so storage will scale efficiently.

Design
This week has been mainly about the World Builder and biomes. Using @lucadeltodecso highly improved tool we’ve been making a world with separate biomes and sub-biomes, and starting to build a library of components to make it easier to create more biomes in the future. More details in this post.

We have also been taking on the minor / monumental task of trying to find a replacement for @ben who is leaving us soon. Ben has put so much into the project and he’ll be sorely missed, and whilst he is a unique snowflake, we are doing our best to find another awesome designer to join our team.

Art
We’ve made good progress this week, even whilst a few people have been away on holiday and off sick.

Concepting has also continued on creature progression. We realised that our standard visual progression language doesn’t fit with all our creatures types so we’ve been exploring alternatives for the livestock and the roadrunner.

We’ve been modelling the hammer progression as a benchmark asset for outsourcing.

Following on from the Protector concepts posted recently we’re modelling a rough blockout to to assess the size and shape of these automatons relative to our player characters.

Animation has continued with the Cuttletrunk and supporting dual wielding.

Do you have an idea for when rivers will be added to worldbuilder?

the Min noise combinator is quite handy for doing ‘rivers’, get a noise function that has the shape of the rivers you want low down, and the rest high up. take the min of that noise and your normal terrian heightmap noise to ‘carve’ the rivers out of the terrain

Any suggestions for the floating islands? I’ve been trying a few different ways to make a sizable floating island, but haven’t come up short with the 3d noise function. Adjust that too much and I freeze the wb.

I got floating islands to work a little while back using whatever the thing is that overlays the top layer of the ground. I think it was called either strata or substrate.

Players can also donate player tokens as part of the voting process.

What is this?
What should i vote for, a president?

Its was called Threedee, but in new version it is called 3D islands.
Just attach a noise to it and let it fly.

Note:
Drag up the threshold bias a bit, it is defaulted to -1.