Testing 29: Creatures, Sanctum, Tutorial, Objectives and much, much more! 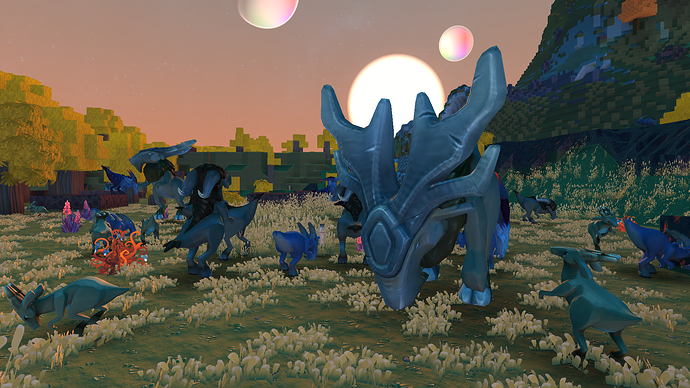 Our quest to get the trailer content into the live game is progressing nicely. We’ve updated the “testing” beta on Steam so you can have a preview and let us know of any wrinkles that need ironing out before we update to “live” next week.

This Testing update contains the 3 worlds that we showed in the PSX Demo build. There are 2 portals connecting the 3 worlds together near the Capital city.

There are lots more changes and features than that, but we’ll give you the full rundown when we promote it to “live”. In the meantime if you get a chance to take a look and report any bugs you find in the support thread, then that would be very helpful.

Just one warning… if you go explore the demo city, LOOK OUT for unexpected holes… it can be easy to get trapped. I highly recommend setting a home location before you visit the city so you have a place to warp back to via the sanctuary.

Or at least, you know… bring a grapple hook…
Um… don’t ask me why I know that.

how do I join the test server?

rightclick on the game in the steam library, go to the settings (the last option), then betas and there chose the testing branch … it will then take a short download and you are in

any discussion of pets/familiars yet

any discussion of pets/familiars yet

It has been discussed, but there are other areas we want to master in final version. Hopefully this will be a feature which is added after release.

There must surely be a way to adjust the hostile mob tracking range per planet? On Vena V, I feel like I keep getting murdered by swarms of spitters before I can even gather the required resources to build a shelter. With no windows of safety for early players (day/night hostility cycle for example) it is somewhat frustrating to get established. Of course once I get a shelter and a sling bow it will be time for retribution, but for now I feel like the beginning planets could stand to be a bit more forgiving.

Pets would be great, but flight is something I would nearly hate to see in this game

Holly cow, The Sanctum is so immersing !

And great idea to make fruits drop out of leaves!! in early stages when you have no weapons but encountered spitters already, finally something to restore some hp! thx…

Where can I find the city? Can someone tell me please, I would love to see it in person(my character of course).

Well holy nut cracker, that was a very fast response. Thank you :3.