Following on from my ‘Gif Collection’ on the Character animations I did earlier on this year, I thought I’d do the same with the Creatures that I’ve animated to give you all an insight into the on-going development of the raw animation. This will take the format of ‘play-blasts’ taken directly from my scene in Maya and is what we use in the studio to review the animations and is the animation benchmark to how the creatures and characters should aspire to move visually and with ‘feeling’.

Like with everything I do, feel free to discuss and give your thoughts/creative ideas and feedback. It’s the perfect space to discuss animation if that part of development is of interest.

The Hopper creature (placeholder name) is a volatile bouncing bomb which we’d love to become more of a sandbox toy when ‘tamed’ - this will depend on how that AI development progresses in the following weeks to come.

Since it’s the creature we’re currently developing right now in AI, I thought I’ll begin here first as it’s the most relevant - See Dave Fooks’ post to see the start of where we are in Code this week and Claudio’s concepts for an artistic visual refresher.

Idles represent not only the personality of the creature but is the most important pose because most animations will eventually return to the master idle pose. Having at least 2 will allow to off-set the timing to stop multiple creatures in the game looking like robots.

Here’s the benchmark animations for the hopping traversal that is a decent visual guide to what I think looks best for the movement of this creature. As always, animation is coupled with AI behaviour and needs to work within our game parameters - so there’s usually a bit of creative back and forth here and compromise.

You’ll notice there’s a little skid (not crazy amounts tho) to the high hop done on purpose to add momentum to the land. As @nevir pointed out when looking at the Code’s first pass on doing the AI for the Hopper Traveral - skidding a bit more on ice would be a really nice touch indeed.

Noted from the forum requests, I also have a planned wishlist for some creature VFX. @Havok40k - I do agree, a particle effect kicking up debis on the land would put the ‘cherry on cake’ to sell the hop completely. (In any case, it’s on the list.)

Having a good reference for low hopping is also needed to see how he can navigate through caves or tight spaces. A high reference too is a useful visual aid for the alternative higher hops to hurdle over objects or climb up those hills.

This is a generic animation for the hopper which can be used for a great deal of ambiguous game circumstances like hitting his head on a ceiling or colliding into another creature.

When his main attack is triggered he litterally charges towards you and detonates creating a lot of personal damage…it may be better to think of a way to trigger his detonation safely!

If he gets into a falling state which is a simple looping animation designed for easy blending between states - he’ll detonate on landing.

If you catch him napping in idle mode this animation will how some decent visual feedback if you get a pot shot in.

Get him into a ball means that he’ll be stationary for a while… watch this space for more on this in code later as we develop - there’s a few things up our sleves that we’d like to try out in this state.

The aim for this creature is not to simply attack him in melee as you are likely to die/or at least lose a lot of health when he detonates. If you hit him in this state - nothing happens, he is protected(like a turtle going into it’s shell).

Hit him too often will result in detonation…

In any case, that’s the animation set to the hopper and as you can see we have a lot of animations for a lot of different game play circumstances. What, where and how they all get used (or shelved) is always up to time, functionality, agenda and resource. At this stage of development, ideas and feedback is always welcome and can still make a big difference - we always strive to do the best we can.

Till next time… have a great weekend.

So much personality for such a “simple” model; can’t wait to see it in game! Especially like the roll on the charge attack.

[quote=“gerryjacobs, post:1, topic:4725”]
skidding a bit more on ice would be a really nice touch indeed.[/quote]

Ignore what I said! Here’s even better inspiration for a hopper on ice:

I love how smooth all the animations are, I can’t wait to see the whole game full of stuff like this, it will really feel lifelike especially if the creatures will interact with each other and the environment

gotta give some love to those tiny legs

I can tell these are gonna make some very interesting opponents! I’ll add this plethora of gifs to the collection.

Wow, the amount of different animations/actions is quite amazing, and imo you nailed all of them. Can’t wait to see them with added particle effects

Though, I think the ‘idle’ & ‘ambient’ animation should reflect the bouncy and unstable personality of the creature, meaning that the creature should appear a bit “hyperactive” and to a certain extend nervous.
E.g. by: 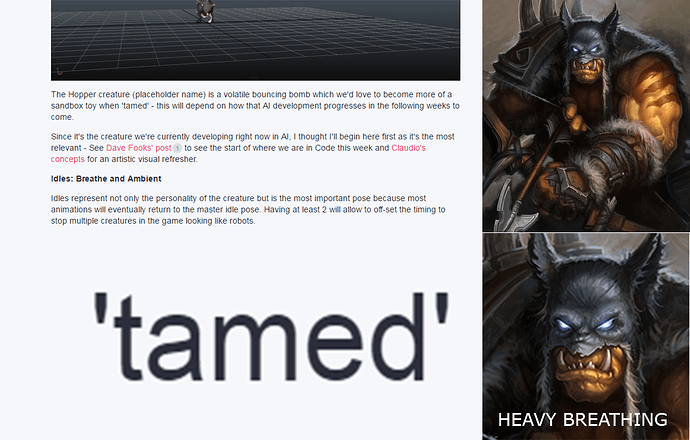 PS: Will this creature always explode in the same way or will there be different kinds of explosions ?

Haha loving it! So much life in a little ball of explosives!

it may be better to think of a way to trigger his detonation safely!

… did you give the game away in the very next sentence?

If he gets into a falling state which is a simple looping animation designed for easy blending between states - he’ll detonate on landing.

I absolutely loved all those creative suggestions!!! Thanks for the feedback so far guys!

The next step is how the animation is realised in AI - that often tells me what kind of polish I need or what needs adjusting or isn’t working as a whole.

@Vastar - yes we plan on different types of explosion (woo) - but for step one we’ll do the simple explode and build on that. We’re currently also working on the entire progression plan and design for creatures too. (The ‘jumble blocks’ is def in our master plan tho.)

Does he has a tongue ?
For some reasons I was expecting to see an idle animation where he licks himself like a cat.
And another one where he tries to scratch himself or play with his tiny leg.

I see 2 Problems with that^^

Unless it accidentally touches one of the explosive knobs with its tounge and blows of.

Oh my bad those weren’t suggestions, it was just my first thoughts when I saw it.
I totally agree with you.