This week we updated Boundless for Release 155. This included further tweaks to the grapple, new Hopper features and the release of the Roadrunner. 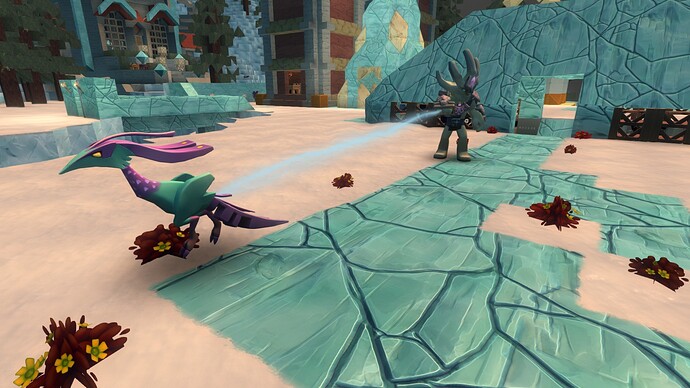 We have been testing the PS4 version to make sure that it has parity for the PC version of Boundless.

We have continued work on the unified Attributes / Stats / Progression System, the user created Portals and adding support for Location Markers on Planets in the HUD. These are all still in progress and will be available to play with as soon as possible.

The following items are candidates for release next week:

If you’re experiencing Latency issues with Boundless please try reducing the Chunk Download Limit. If you still experience Latency then share a screenshot with the debugging information displayed (press “.” to access it).

Code
The latest update included the skittish Roadrunner and new physical interactions with the Hopper. Both creatures can be manipulated with the Grapple. We’ve also been working on improving the shared creature navigation so they can get around barriers, such as walls, and they have finally evolved enough self preservation to no longer jump off cliffs! Beware the Spitters will now be hunting you down more ruthlessly, even through simple mazes.

The HUD work continues adding more damage information, both receiving (direction and damage amount) and delivering to creatures. Additional information is being added when the Totem is used to show other locations you already already on a Planet.

The GUI speed improvement are now merged into Boundless for release and have reduced the cost, especially when opening the Inventory and physically animation (wobbling). Work has not commenced on reskinning the GUI with new textures for 1.0 release.

For PlayStation 4 we’ve been working through some of the Technical Requirements Checklist that are required to pass submission for a release. We are also working on the backend of user management, making it more scalable and adding support for PS4 sign-in. Quite a bit of time was spent on bugs fixing, adding support for VFX and SFX hooks. Otherwise time was spent on more Maya modelling export work.

The following shows the process of creating a Warp to a new Location Marker.

When holding the Totem the following Locations will be presented on a Planet in the HUD:

The idea is to give players guidance on where to Warp to when visiting a new planet. They can pick the Captial or a City, or a location discovered by their Guild, or simply an interesting visual feature.

@olliepurkiss started the week off finalising the balance of Grapples and then moved onto to creating the initial data for the Attribute and Stats System with Andy. The rest of the week was spent designing how the Forge system will work. He also shared an overview design for Guilds in Boundless. Please checkout the design and let us know what you think.

Art
This week the art team has been busy on props, character customisation, creatures and VFX.

@Minyi has been exploring decorative props. 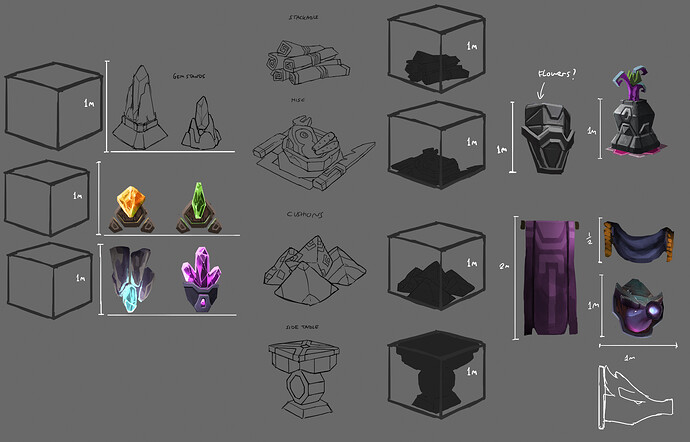 @jesshyland has made an inactive / off state for the pipes and started work on the Portal blocks: 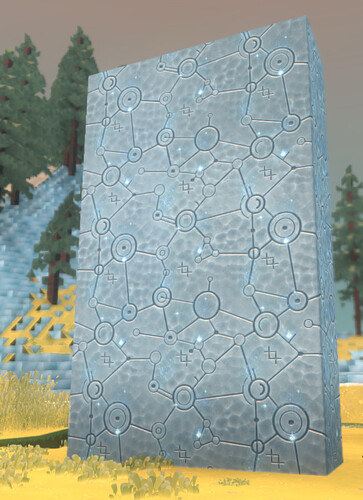 She’s also completed Hunter tier 2 which is now in game, and started work on the Hunter tier 3: 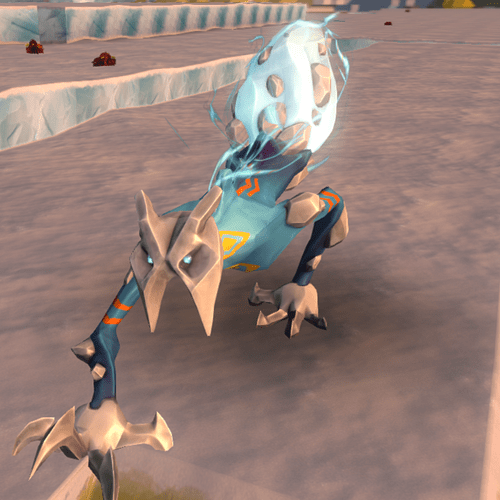 @gerryjacobs has been continuing animation on the Hunter. We’ll soon have a full animation set for this creepy, ethereal creature ready for @AndyD and @dave to integrate.

Dom’s been working on hit impact effects and the poison elemental effect. Here’s a early version of the poison:

That’s all for this week!

I love the locations HUD thing, being able to look at a planet and see the points of interest is a really nice feature!

My favorite little tidbit is the mounted spitter’s head! Thank you!

wait, wait, wait. So if I get into the game right now I can find hunters? Where???

Also the gem sockets, flower pots, and cloth standards, AWESOME. Could maybe we be able to make sails? I am currently trying to make a shipyard (crazy, right?) and there is currently no real way to make like a sail out of cloth. But the standard and the drapes look really really cool to start it off

Great update!!
@UmbraVictus do share the location of your ship yard.

You know the township in Berlyn, it’s near that. These are the coordinates: -1708, , -311. Note it is still under construction. But I am planning on adding a third floor from what is there now. Then the middle section isn’t beaconed since that will be where the ships are built/loaded, but the top part of that section does have a beacon where I plan on making like a crane, so it looks like a legit shipyard (I don’t know if we will be able to make boats, but it’s still cool to have a shipyard for like a navy!).

Then when they add flying and the ability to make moving flying stuff, I plan on building an airship yard, it will be legendary.

the decorations look amazing! can’t wait to get my hands on them

Resources: Spent the good part of an Hour and 30 minutes at the Mantle level and found nothing… nothing but lava. Why are resources ridiculously rare? No Titanium, no Gold, no Gems, no Tech! Roadrunners are also impossible to catch. This game could be promising if it isn’t a time leech like it is at it’s current state. Crafting times are outrageous too… -__-

I felt the same way when I started. Don’t mine like you would in Minecraft. Find big mountains dig in around 80 to 150 high for metals. There’s posts all over about where to find gold etc. Lower areas are for coal and fossils, which are just as important as gold and titanium.

Hang in there, once you get the hang of it it’s not so bad. And as far as crafting, that’s going to change as we get to specialize in skills. (I think)

I’m under the impression that different Planet/Servers offer easier access to Rare mats. I’ve found ONE Tech Component after around 6 hours of searching. The Minecraft feel is why I stopped playing minecraft: it just wasn’t fun to grind for hours on end for nearly nothing. I picked up this game for the adventure aspect that’s advertised ( I know, it’s still being made) but man, is it grindy! I stopped Warframe after a few years of grinding.

Yeah rare mats are hard to come by on the starter planets. But usually people will sell you what you need, or just give it to you. Currently the easiest way to get cash is by mining. It’s a grind but that’s what we have for now.

They’ve been rolling out updates every week. It’ll change, hang in there, or check back in a month.

How do I get off my starter planet (Beryl)? Do I need Gold and all that to make a Warp Picker Upgrade (along with Spark…which I can’t get until I get my Power Core which I STILL can’t get without another Tech Component)

You don’t need a warp picker, just find someone who’s on your planet to give you some location markers, then you can warp from sanctum to wherever you have locations saved. I’d come get you but I’m making dinner, and wont be on for a few hours. If your still stuck I’ll see if I can get you going in the right direction.

Head to berlyn township I am selling planet markers there

coordinates to get there

ok give me a few minutes to get there