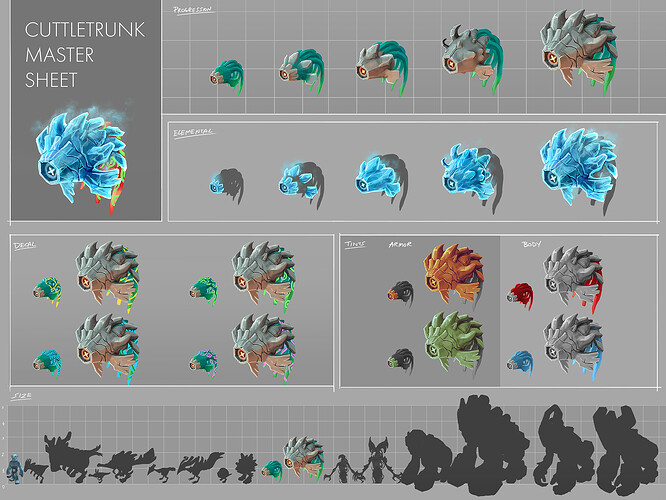 The Cuttletrunk is a heavy flying ranged attack creature zipping around using his agility to get into prime attack positions. Like an octopus - his skin on the face mimics the terrain to create geometric shapes. From his face, projectiles can be fired. They are more likely found on middle and high threat worlds. They can be alone, or in small or medium sized groups. When idle they rest on a “dock” on the surface. When agitated they leave their dock and shoot projectiles at enemies while strafing around their target. His main attack is a pull and push beam in which can push a player off a cliff or drag them over a lava lake as examples. Some variants pick up enemies before flying straight up and dropping them, while others rip blocks from the ground and fire them. As well as drops from the creature itself the dock has some drops too.

The creatures of Boundless epitomise the geometry of the voxels of the world by means of their sculpted chunky sharp angles of their mesh as a strong definition of art style.

Like in reality, creatures on earth often blend with their terrain for use of camouflage - our creatures also belong to the terrain to which they inhabit.

Development in animation/rigging/skinning up to the final ai, where providing a ‘soul’ to the entity (no matter what it is) is ultimately the fundamental goal, is also carefully considered. Those all additionally harmonise and overall becomes relevant too as a hositic creative package which adds greatly to their personality conveyed, the world they belong to and ultimately the quality we as a team all aspire to reach in Boundless.

The Cuttletrunk in particular takes this ethos to heart… like an octopus - his skin on his face mimics the terrain by changing as part of his rigging to create different geometric shapes in animation. The changes in key poses between circle, triangle, star and square face shapes therefore become a major part of his identity.

The Voxel Blocks of the Boundless Universe and Creature Tinting

In actuallity our creatures go even further than that…

A core part of our design is that the areas of flesh and armour availiable for tinting will hopefully take on properties of colours directly from the voxel blocks on the Biomes that they belong to!

The idea, is that you will have creatures like a Road Runner belonging to a Desert Biome taking his colour palette directly from the Sandstones it’s intrinsic too.

In any case, this will need to be carefully created and managed by the art team because the only way we’ll tell if this will work (the way we hope it will), will actually be when we create the assets and try it out in game.

The last thing you’ll want is creatures that disappear visually in that environment unless that is the intent.

We will know more as we develop this exciting feature which directly links the creatures to the actual sandbox world of Boundless!

His main attack is a pull and push beam in which can push a player off a cliff or drag them over a lava lake as examples. Some variants pick up enemies before flying straight up and dropping them, while others rip blocks from the ground and fire them.

Ha, these guys will be endless fun and frustration

creatures that disappear visually in that environment

as Gleam colours are usually distinct enough from the base terrain.

Very glad to hear all of that information about tinting. I’m very excited for all the creatures to really look like they belong in the biomes in which they reside, while at the same time retaining a certain flare that belongs to that creature in specific. Thanks for the update!

Also, for anybody who has wondered, I’ve been placing all of those devlogs in the collection, despite how I’ve neglected saying it in the comments.

im so glad to see you guys working on this game. it really has potential and i think it will be loads of fun. I think right now, in my opinion you guys should work on weapons right now considering the fact that there are only 2 in the game. maybe something like spears and swords and knives and stuff. I think this will add loads to the game and make it even more enjoyable

I hope you make millions off of this game
Alex

Whilst Boundless will only contain 2 weapons at 1.0. These weapons come in many materials (metals, alloys, gems, special) with many enhancement combinations. It’s better to think of them as a ranged base and a mêlée base. So it’s more like 2x#Mx#E^5 weapons than 2 weapons.

Also improvised weapons like the axe or hammer with enhancements to make them more combat effective.

oh u know what would be awesome? shields

oh u know what would be awesome? shields 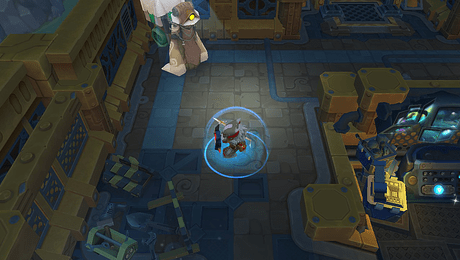 bubble.png1281×721 836 KB
It could even fit the theme of the game if it is introduced as a ‘mini or mobile’ beacon tool.
But let’s not get off-topic here.