When I go to start the game, the white window flashes up for a second, then nothing.

@GreyArt247 has a similar set-up (on two PCs) and both unable to play BL now.

I’ve tried playing with numerous settings in the AMD control panel and nothing makes a jot of difference.

At least @GreyArt247 can get the game running!

I don’t have any mods running, either, fwiw.

I’m not angry at anyone, in particular … but not being able to run the game is not really that good … especially since it seems to run OK on the old Intel UHD 620 laptop.

EDIT - OK, there’s some stuff in the Event Viewer:

Some rando on a Windows thread said that clearing an “AutomaticDestinations” folder could resolve it, but I don’t have any recent items as they’re completely disabled on my system.

They do also mention it could be GPU related.

I assume you’ve verified files via Steam and everything already.

I’ll try a full re-install tomorrow, but if it’s related to a file that’s not part of the install, it could be problematic.

I was all happy that I’d got this PC back (there were power cut outs from a BIOS issue that is running rife through AMD setups), and it appears to not be triggering that issue … now I can’t run Boundless in pretty mode.

EDIT - To confirm, the drivers had not been updated at the start of this thread (I can’t remember the version) but it didn’t work then (whilst it had done just a month ago) … I’ve updated them, and it still doesn’t work.

I’m wondering if the BIOS updates from AMD have changed frequencies, etc, so much that it’s actually making the game unable to start … could that even be a thing?

I did notice their memory clock speed was low & core clock seemed really high. It looked like an attempt to overclock or do a performance tune-up, but they said they hadn’t altered those settings. Like some weird bios changes or settings. I guess there could have been a wonky update somewhere that threw things off. Do you use Wattman?

But, nah, I run everything at stock.

Memory is clocked at 3200, which is stock, and the GPU is seated correctly (had to double check it as it wasn’t running at 16x … reseated … all good).

I’ll reinstall tomorrow, and see what’s up. Too late for all that gubbins today.

@GreyArt247, ye of the Sochaltin I brotherhood … can you check your Event Viewer after a failed startup for me, pwettyy pweeaaaase?

EDIT - SFC scan was fine. tried to register the file (regsvr32 ucrtbase.dll) with this error: 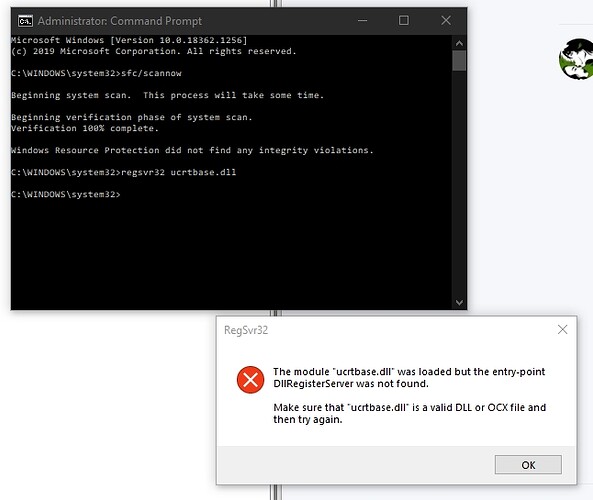 Also (I’ll update the original post with this), I have just updated Windows … TODAY.

It worked before the update, and now it doesn’t. You see, this is why I don’t update Windows.

Both of you might want to run the event viewer log and have someone look at it to pinpoint your issue, after your game crashes. Could be ram, could be a lot of things.

Cheers, yeah, I don’t think it’s RAM, or anything like that. The machine has just come back from SCAN and they’ve been stress testing it for weeks now due to the aforementioned AMD issues.

Need Grey to check his events … I have a feeling this is Windows Update related, and if so will end up affecting more than just us two.

Just grabbing Boundless logs now, will update with them shortly … but here’s the log.txt:

Have also tried running the game on beta/testing mode, too.

This guy was also getting the Faulting module path: C:\WINDOWS\System32\ucrtbase.dll error. Said it turned out to be the Windows audio service.

r/NoMansSkyTheGame - No Man's Sky crashes at the "Hello Games" logo

It looks like a lot of people are having a similar problem and this fix worked for them too.

Cheers, I did notice windows installing some new thing which I investigated, a surround audio thing (that I don’t need) … lemme see if I searched for it in non-private.

I tried this, but it had no effect, however I’ve not restarted since I tried a couple of other tweaks.

I also stopped all Nahamic services and processes, too. I’ll try it with the Realtek HD Audio blah next. I’ll also try disabling that at boot.

… turned out to be the Windows audio service.

I will uninstall Boundless now, do a full restart, and try again.

Have re-installed. It didn’t start before the restart … I will try … er … afterwards.

I will also see what analogues to this file my laptop has.

OK, @majorvex, looks like simply restarting after a re-install did the trick. Perhaps Windows refreshed that file as a part of the install, I dunno.

I’m not seeing the error when it starts.

It did, however, start with the popup all-white window, then that quickly changed to a black/grey window … and then closed again, as if it were crashing.

… However a few seconds later the little white window returned … then it maximised to full screen, and Boundless loaded.

Going to play with some AMD settings to see if I can pimp it even more than it already is, then apply mods, etc. But it all looks good. Please do close ( after @GreyArt247 has finished responding, of course

Game crashing on start up

Not being funny, but I can’t be bothered to cross post!

Sorry @MadManMoon, didn’t mean to cause any agro …

I was wondering if this is relevant in your event viewer.

Edit: Good to see you got it sorted