⚠ Gleambow Event info, when they can be spawned, Official Rules, Official Terms of Service

No one owns a gleambow - independently of how it was spawned.

But - there is maximum number of active meteorites on a world - if this limit is hit then they will not spawn.

GB augments can be used to spawn a GB meteor anytime (even after the event), on any T3+ planet. Mobs at manually spawned GB will not drop mutated sacs.
The purpose of manually spawned Gleambows is soley to collect blocks (possibly gleam).

In regards to some less than desirable behavior during the event:

When engaging in Live Feed, you may not:

If someone is being verbally abusive or is breaking one of the rules above, please send in a report and/or PM the info to a dev on this forum. If you don’t tell them, they can’t help you. PM a Dev 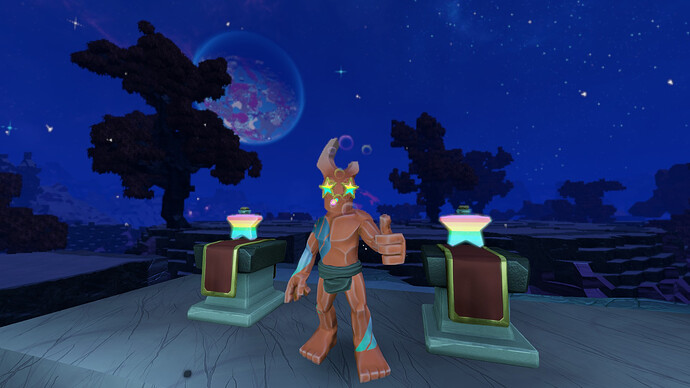 you just have to walk around circarpous I for a while, they insult you, they harass you, they persecute you, they throw bombs at you so you can’t move forward, but this is boundless, I’m used to it, when something bothers them they cry and harass you, everything happens not only with this event, but it has intensified, nobody forbids me to chase a meteorite, as you all know it is a race, I recommend you wait for the event to end and do your own races so nobody will bother you, but an event is for everyone and everyone is welcome

Could you pm me who said these things to you?

To be fair you do wait on our platform wait for people to spawn one and use our portals to them (not really racing at that point) and then action speed 3x3 mega speed absolutely decimate peoples meteors. But regardless you shouldn’t be harassed and if you pm the details I will address it.

I prefer not to give names, the person who gave it to me knows perfectly who it is, apparently, all meteorites have an owner, they all insult you and put your name in the world chat, so that everyone knows that you are bothering and it is not So, his selfish behavior is the one that annoys, even so, I do not care, I turn a deaf ear and do what I want, I play and have fun, I will get the meteors that I want, whether they have been fathered or not, that happens to the rude, I I lost at least 15 spawned meteors and I laugh, since I know that the fastest and closest one won, it had been a long time without having fun in this game, I will be taking advantage of this event day and night and I am happy despite many bad customary people to get things crying

No one owns a gleambow - independently of how it was spawned.

The language is not the worst. That seems to be the normal behavior of these people. But they drop bombs at you to kill you … I don’t like that…

Ill add blink bombs to my inventory next time. I think i win

I just returned to my base after some solo meteor hunting with my wife and 7 year old kiddo.

My kids character is killed by people purposefully bombing her.
My wife can’t even get an attempt at a few sacs because people are busy killing her instead of the meteors…

Now we didn’t know the spawned ones don’t seem to give sacs. Our bad.

But what the **** is wrong with these people?
Ya know.
The awesome players i read about all the time who are just so awesome and amazing and sweet to all these new players and vets etc.

Because I haven’t been harassed by one single noob. Nah they’re nice!
Its the vets.
The ones we all know.
The ones that own half of the known planets and cities.
The over political correctness where we aren’t allowed to speak against these people is ******* sickening.

I turned on boundless wih my family tonight to have a good time.

Instead i saw more rudeness and incorrect behavior. Just like the news i was watching previous to boundless.

Its sad when even our little spot in the virtual world isn’t somewhere you can escape the The harmful words or behaviors or others.

I don’t need a lecture on how i could be more polite and nice pointing out these people.

Im honestly fed up with the people who can’t handle someone getting fed up. They complain that theres to much “drama”.
Which is funny that they ignore the problems and instead demonize the people who are being mistreated.

all i can say with bombing is that:
people are always talking about how gleambows are a PVP event.
bombing sounds like PVP, so no rules being broken

I give you all the reason, the people who are currently hunting in circarpous I, are using bombs, to prevent you from achieving anything, I am ashamed of this behavior, but it is an event, anything goes, so I will continue to insist and now I will not respect any meteorite , since they call me troll for playing, there is no respect, therefore on my part they will not have it

Well this thread is about to go off the rails. Night everyone

yep, your not wrong there!

Yet again.
We focus that theres drama.

Not what its about.

id rather not start this fight again, just proving a point and thats all

all i can say with bombing is that:
people are always talking about how gleambows are a PVP event.
bombing sounds like PVP, so no rules being broken

You sir shouldve not said that.
Have fun with people bombing the whole circa and no one has fun.

well, as the devs said, cant get mad at em. just gotta respect the rules

Why didn’t i think of that!

Its a freebie! Lets all bombs the poor folks trying to simply play! All to circa!

well im not the one making them. thats what everyone else is saying

so blame yourselves for bringing this upon the gleambow event.