That’s right folks, it’s back! From Thursday the 21st May, Gleambow Racing will be back in operation for two weeks (until the 4th June).

Gleambow Racing is a limited-time event which rewards speed and skill as Citizens chase down special Gleambow Meteorites made up of colourful natural blocks. Some of these will be in shades never before seen in the Known Worlds! You’ll need a special Gleambow Totem to destroy these Blocks - craftable in a Workbench. It’s a great chance to gather completely unique rewards with which to decorate your Build.

Prep for your Gleambow adventures with 3 brand new consumables, each bestowing a different Buff with exciting results

Once you’re done chasing Gleambows, kick back in your Beacon and Craft two new decorative props, just for this event. Don’t forget to head over to the Exchange, where you can pick up a Gleambow wearable or two. We’ll be revealing all the new goodies next week on our social media feeds and the forum, so look out for those! 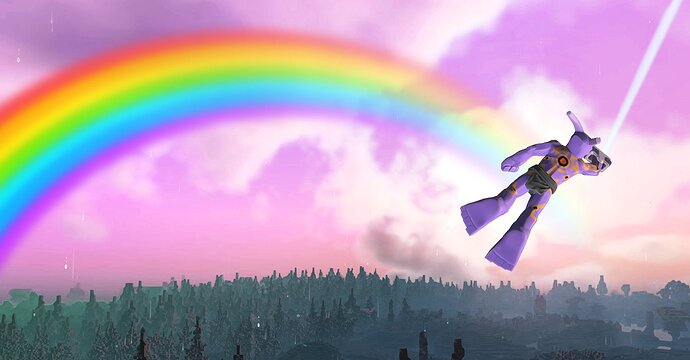 Gleambow Racing - How to Play

For those of you who weren’t around the last time, let’s run through how Gleambow works.

On Rugged and Inhospitable Lush worlds, all Meteorites are replaced by Gleambow Meteorites. A Gleambow is a unique type of meteorite made from natural Blocks in a variety of colours. They can be identified by their spectacular multicoloured trails. If you’re lucky, you may even find a pure Gleam or Glass Gleambow. Fancy!

Once a Gleambow touches down, you’ll only have a short time before its Blocks adopt the natural colours of the World. Sprint, Grapple, Warp, slide, leap, swim and Buff your way across the landscape before it’s too late.

You’ll need specialised Tools to break your way through those super-tough Gleambow Blocks. A Gleambow Totem will do the trick, so make sure to get hold of one (or more). While you’re at it, keep an eye out for some strangely colourful Cuttletrunks, aptly known as Gleamtrunks, who’ll try to make life difficult. Don’t ignore them! You might find their pickings useful for your next race and more.

Here’s Jiivita with a great video rundown as always;

42 Likes
Can all the hunt platform owners temporarily leave the doors open on their platforms on appropriate tier worlds? For gleambow
Release 244 - Gleambow Racing, Stability, and Smarter Stacks
:warning: Gleambow Event info, when they can be spawned, Official Rules, Official Terms of Service
[COMPLETE] Brief Downtime Today at 11:30 (BST)
DrCyanide May 14, 2020, 11:04am #2

What sorcery is this! You want me to spend thousands on grapples again lol
Either way i can’t wait for this again

O.o wut
What will these be??

All will be revealed!

all Meteorites are replaced by Gleambow Meteorites.

In the past there was only a chance of the Meteors appearing. Is this now all meteors are gleambow?

@SamF Checking if this is a typo

Whose got two thumbs and bought up all the fast brews? This guy.

I see 3 different kinds of items that will likely come.

The down time must have been to add cheering across the oortiverse! This is spectacular news!

Wooo! I haven’t gleambowed before - can anyone tell me if forging the gleambow totems for AOE/damage is possible or even helpful for this? Or are standard plain totems all you need?

You will need a gleambow totem. Damage is totally irrelevant on them as the gleambow blocks are 1 shot to break. So best forged with AOE + action speed.

Aoe is helpful, damage is unnecessary: )