Minor update to introduce changes to the chisel, spanners and dual grapples. 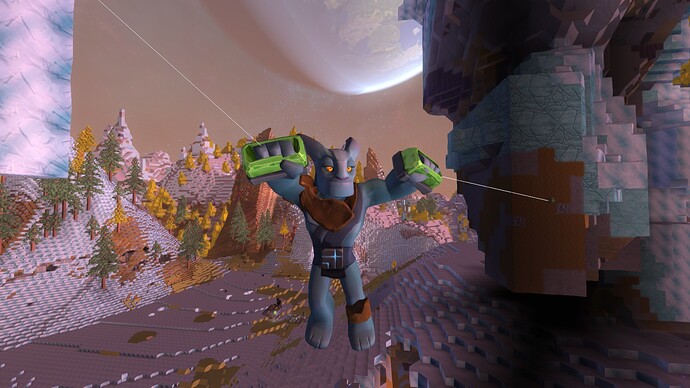 Update 1: Missing release note about the grapple has been added to the original post.

Oh man, back before the two hand system it was possible to use 8 hooks at the same time! Those where exciting times hahaha!

until the hook has embedded into a target point, creature, or player

Why it’s the chisel, not the spanner?

When you plan to add a receipt for turning gold into the coins?

Why it’s the chisel, not the spanner?

We can use short single clicks, holding, hold-&-drag, shift clicks or many other variants. I don’t see some troubles on that way.

The only trouble is with that is you can already hold, hold & drag, and short click with every tool/action.

What you’re suggesting is adding a completely new mechanic, which is different to every other consistent action currently in game. This then makes it counter-intuitive to use.

When you plan to add a receipt for turning gold into the coins?

I also love to print my own money!

We still need another way for Coins to enter the economy. The multiple Coin sinks are working too well.

Yeah but pressing it from gold seems the wrong way to go, it seems like a source that seems too hard to controll and gives too much power to the miners.

We still need another way for Coins to enter the economy.

The objectives will eventually give you coins and experience for completing them. The aim is for some of them to be repeatable and for the rewards to scale with difficulty and time. Hopefully this will make it into the game soon.

We’re also considering another option where you can convert some items into coins. But this is not something that will be in the game soon, as we need to trial the rewards for objectives first to see if it is needed.

Don’t mind what it is personally, I just want some other coin source as soon as possible so we can actually test some sort of economy out

Marketplaces are essentially just placeholders at the moment until we all don’t feel like we’re clinging on to our warp funds!

All we’d need is 2-3 repeatable quests of equal difficulty handing out coins to give us some sense of an economy, make the handouts as low as you like until you’ve planned it better. Even 1c given for 15 minutes of questwork would stop the sinking ship

We’re all playing a vastly different game from what we will be in a few weeks time anyway based on what I’ve seen of the skilltrees, don’t be scared to make a minor economy change in the mean time

it seems like a source that seems too hard to controll and gives too much power to the miners.

Actually not. It’s only question of coins-per-gold balance. When here will be a farming and a hunger, miner will needs to buy food from farmers and tools by crafters. And their coins will spreads between other players.

Why gold? Well, why the gold was most common payment agent for humankind? Because everything is decay except gold. And don’t forget about its shine! It’s IRL.
In Boundless we need gold to point other planets and coins to travel to. It’s looks very adequately to use gold as part of measure value of every action and resource unit.

If you can directly convert gold to currency I’d rather not have currency at all to be honest.

Warp is the only sink right now, if it was changed to a cost of resources and we switched from buying/selling plinths to trading plinths, I’d actually prefer that.

But all games use credits these days, so if we’re stuck with them I would just like objective based influxes like @luke-turbulenz said

supply and demand,something is only as valuable as the demand for it,if no one wants it the value would be small.

also a tiny problem with being able to make coins from gold,some planets have tons of gold and that would cause alot of people to move to them planets leaving other planets less populated.

If I could mint coins from gold I would spend a week mining on elopor and be rich but so would every one els. Then that silver hammer would go from 1000 c to 9000c. Thats just the first week. It would cause major inflation.

Warp is the only sink right now

FYI - Sales tax is another sink.