Please report all issues discovered in Release 192 in this thread.

Release 192: Balance, Fixes and Polish!
Level 1 planet is no longer safe now(nope Now level 1 planet is level 2)
Update Issue / Deleted Materials
ISSUE: Resolving Release 192 lost crafting items
[Issues]All props description are lost
Fall through the planet and break your tools for no reason!
My Machines Stole Everything!
Big Bug
Alright, so I took the courage to become a Wayfarer on the early access and these are my thoughts so far
Naming issue on Epsilo
Big Bug
Steam Achievements
Testing 193 - Report issues here
Flithor May 1, 2018, 6:30pm #2

Hopper, Cuttletrunk and level 2 Spitter are begin to spawn on the level 1 planet.
And they alsl will spawn in the mine pit.

This is extremely bad for novices.

I broke my Mixer because some of my pre-update crafts disappeared (and I know with Furnaces, this works).

I found that every material I was using with that particular Mixer is now gone… which was enough for 50 loaves of Starberry Bread, and 100 Igneous Brick mixtures.

Sorry about this. As with another forum topic, we’re currently investigating the problem.

There is a known issue where breaking any machine during crafting will destroy the ingredients in use, but we’re also interested in knowing what recipes you were crafting prior to the update.

This happened to me on the last update but I didn’t hear anything back.
it seems a LOT of people are getting this.
I made absolutely sure I had nothing crafting before I went to bed (the last 2 nights) because of this.

I’m pretty sure that’s all that was crafting, there may have been another set of slingbows but I can’t remember for sure so I’ll leave it at that.

I don’t care about the items that were in furnaces, those were pretty minor as there’s only one item crafting at a time, but the mass crafts are a huge loss. It would be super amazing if we can be compensated somehow.

Hello! My girlfriend and I had the same issue we crafted all the Advance Power Coils over the past day; However, the advanced compactor power coil and the advanced refinery power coil are no were to be seen along with the materials. We didn’t break any of the machines, but when I was finally able to log in (stuck on Solum last night) the machine was worn out. Her character name is Monster if that’s needed. Let me know if I can provide anymore details.

Also, is there going to be a rollback or any way of getting the materials back? Right now we are a little disheartened to play after losing a mass craft of two sets of advanced power coils.

When he referred to “breaking” the machine, I believe he was talking about wearing the durability status down to worn out like you said had happened

Also keep in mind it’s testing and bugs happen. And everything will wipe before full release anyway

I lost a few things I was making as well that I can remember.

What I was Mass Crafting at the time that is missing:

Thankfully I had finished most of my crafting before the issue and claimed them, but I still lost a good amount of resources that will now set me back a few days. I guess I’m lucky because my issue is nothing that a day or two of hunting can’t solve for the most part.

Update: Just lost mass crafted compact hard coal which I had queue’d up before the update. I didn’t think to cancel it before crafting it again, for fear of losing the resources, but I lost the product anyways. 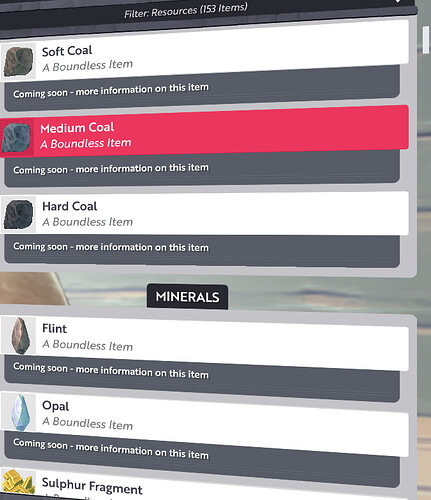 I was in the process of doing 4 mass crafts of Oort Shards and one mass craft of diamonds when the update happened! Super bummed about this because they are all gone!

Not sure if it’s intended or not.
I can’t drag item from the inventory into my hands if I try to replace the item I am already holding.
Pretty sure I could do that before.

I was also mass crafting before i went to sleep, lost a bunch of refined silver alloy from my refinery. (I did not break or try to remove the machine)

A few hours ago, I processed a bunch of timber that I made, and some Gleam. Logged in, the machines showed usage, but nothing was spit out. I am missing the original resources / results of those resources

I lost 500 machined gold, 100 titanium furnace bases, and an unknown amount of titanium alloy that was crafting when the update landed… I have not destroyed the machines. Let me know what other details I can provide

the single coil attached to the machine that was making titanium alloy needed to be repaired with the correct spanner 6 times before the health went up. I dont think it was lag but I dont have proof.