The tool allows you to visually composite the definitions of complete Worlds, individual biomes, and ultimately all the parts that makeup a biome. The tool supports realtime tweaking of parameters and will display the result, either schematically within the tool or with the full rendering in the game. The World Builder is extremely sophisticated and exposes the generation process for creative manipulation.

Our ambition with the Boundless Worlds project is to harness the creativity of the community to build a stunning and diverse standard library of biome parts. These parts will then be used to create the worlds in Boundless. We will obviously contribute to this process as it’s essential for the release of the game. But we have already seen some great designs and ideas from the playing community. Exciting times for Boundless.

Any and all contributions to the project are welcomed - be bold! @nevir has volunteered to help steer the project initially.

Releases
This week, we have been testing Dual Wielding as a top priority as we wanted to get it out to the players for feedback. Functionally, it does the job but after getting the feature tested internally by several team members, we came to a consensus that the keyboard + mouse control was needed iteration before release. We decided to delay the release for this week.

We have also started to test Machine Crafting in anger as the plan is to release it next week. (The game currently contains Hand Crafting where you craft items in your inventory without needing a machine.) Functionality wise, it works as designed but testing the recipes and balancing them is proving to be very challenging. We are currently making changes to the recipes and we may also make some changes to the GUI to make it more user friendly for next week’s release.

World Wrapping is proceeding well and we’re still working towards a July release.

Code
For crafting the full colour tinting has been implemented, so you can craft multiple colour variants of items depending on the input colour of the blocks or items. This means items made from things harvested in one world will vary in colour from items made in other worlds.

We’ve been working on dual wielding and are implementing a second pass on some of the flow to make it slicker to use. The Totem item is now in game, as are many new block drops: ores, gems, coals, fossils, ancient technology. The GUI continues to be expanded and refined.

World wrapping is part way through with the player able to wrap around the edge of the world and parts of the rendering now working. The day/night cycle is progressing with two separate celestial bodies. We’ve also been adding some support for the audio engineer to allow them to use Wwise. The backend engine has had some housekeeping work done and some of the last bits of the shader pipeline worked on. Additionally some basic analytics data has been captured.

Design
This week we launched the github repository for us all to put our awesome biomes into. We really want this to be a community centred thing, and hope that lots of people want to be involved in making worlds for the game. Any feedback or thoughts on that would be gratefully received.

With the crafting system coming along, it’s been possible to start to balance the recipes and the resource generation, which means we’re starting to see a game emerge. It been really good to be able to actually play the beginning stages and craft the first few recipes. There’s still a long way to go, but it’s a good step.

@AndyD has also done a brilliant job of implementing the Dual Wielding, and it’s been great to work with him on polishing it up, and tweaking the controls.

We’ve also been supporting the artists as they come up with concepts for the wearables.

Art
This week the art team has been supporting machine crafting and dual wielding development readying for release.

We’re also been working in pre-production across other areas of the game:

Here’s a WIP image of the final tier armoured version (with art feedback notes on the right): 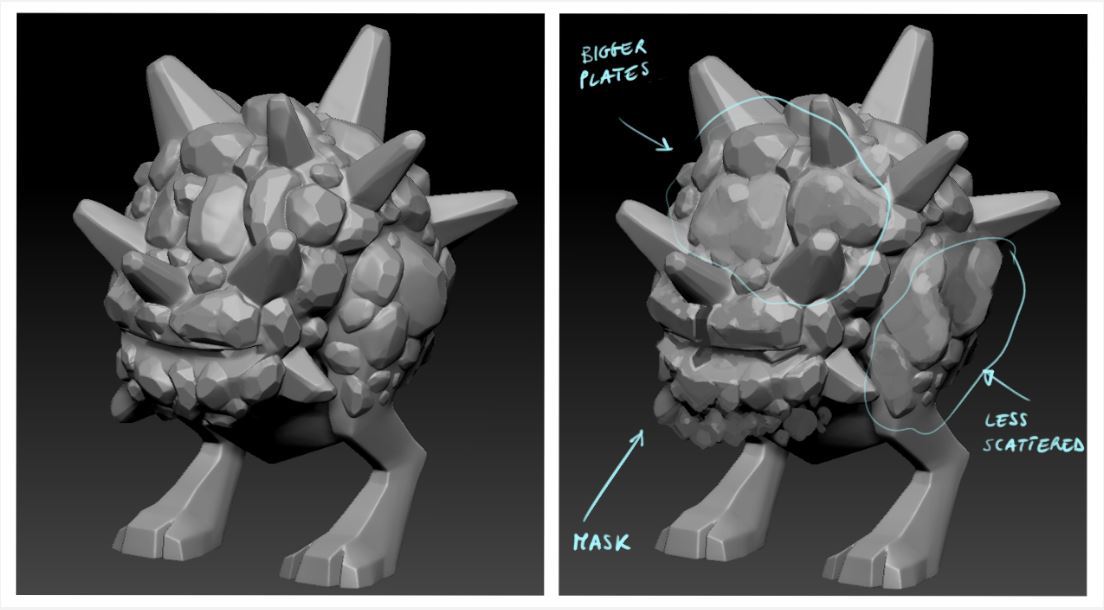 Animation has continued on the Cuttletrunk.

Functionally, it does the job but after getting the feature tested internally by several team members, we came to a consensus that the keyboard + mouse control was needed iteration before release. We decided to delay the release for this week.

Glad you caught that.^^

Generally seems to go in a good direction.

Wearables - concept exploration to see how we can approach this in our visual style. In Boundless we aim to provide a wide range of interchangeable wearable sets to customise your character.

So we can test all the stuff you are creating.
And of course so we can give our feedback.

I’m really looking forward to the prospect of machine crafting! Does this mean that when machine crafting is released, we’ll also be able to mine some of the ores and gems that we’ve seen dotted around on the test servers?

Does this mean that when machine crafting is released, we’ll also be able to mine some of the ores and gems that we’ve seen dotted around on the test servers?

The Totem item is now in game, as are many new block drops: ores, gems, coals, fossils, ancient technology.

Gah! I somehow missed that bit!

In any case, this is shaping up to be a very good week indeed!

We have also started to test Machine Crafting in anger as the plan is to release it next week.

Looking forward to the highlighted updates, but am curious about the above… is “anger” a tool, or what?

Haha! No, ‘testing something in anger’ is just a phrase used by developers, meaning that it’s going through some seriously rigorous testing!

Interesting. Must be regional, because I’ve been in dev 15+ years and never heard it. Then again maybe it is new and I haven’t heard it 'cuz I’m an old coot. Or perhaps I’m going senile and just don’t recall…

Thanks for the clarification.

No worries! I guess it must be a regional thing then. I’ve also been a dev for 15+ years, and it’s not an overly ‘new’ phrase as far as I am aware. When I usually test something in anger, it’s generally a new program or way of doing something, which I’ve not fully had time to learn (or even comprehend), and it’s been requested as a must have for a project… set that against a deadline and hey presto, you’re learning it in anger. At least that’s my full interpretation of it anyway!

I guess you could also call it a trial by fire…!

Have you read though the weekly devlogs? I think it’s quite likely the game will be released by the end of the year.

I have read them and I know nothing about game design but what I DO know is, isnt not as simple as flipping a switch once the game is finished and itll be on store shelves a week later (if that were the case then when a game goes gold why are we waiting month or more before we can go buy it?), you still have other things to do after completing a game before you can put it on shelves (advertising, hype building “campaigning” etc etc) and those other things can take weeks if not months.

That being said if we’re still talking about and testing things like Art and Design (something that should be done right before a game is finished) or testing things like “We have also started to test Machine Crafting in anger as the plan is to release it next week. (The game currently contains Hand Crafting” those all sound like “early stages” stuff which would lead me to believe that said game will not be finished in 5 months or less.

Now if you would like to educate me on the matter then please feel free to do so, I would most greatly appreciate it.

I did say “aiming”, so the current proposed timeframes could change depending on many factors, such as additional content being included for the 1.0 release (which I would be more than happy about!), or other unforeseen circumstances.

Sounding awesome! Can’t wait to give all the new stuff a try