This week we have been focused on the final preparation for the C++ version and getting it on to the Steam mainline. Whilst this should have been relatively simple there were quite a few weird bugs that took time to fix. But we’ve now finally done the switch.

Checkout the posts to learn about the details of the switch and the recent changes to the C++ version of Boundless.

As we had a bit of a bumpy ride with the C++ update this time, Dual Wielding and Lock development have been a bit slow. We are still hoping to release a functional versions of Dual Wielding, Storage and Lock this month. We are keeping our fingers and toes crossed.

The world builder update (now includes inverted slope support) and resource generation development are going well. Releasing them will mean another apocalypse to the worlds of Boundless.

Code
We worked on the latest release, moving the C++ branch to become the main version. This includes two new worlds being generated with the first pass inverted slope rules, an updated version of the old live world and a new ‘funky’ world. The new world is a first experiment in developing unique and adventurous biomes.

The Pipes, including first pass meshes, are being added to the Machines so power can flow around. We also worked on fixing the flowers so they appear correctly in the world and inventory.

The GUI work has continued with the reflow as well as allowing users to order items, so you can place items on your Storage shelves just as you like them.

We worked on an internal PS4 demo and as part of this work on smoothing the portal transitions. The goals is to get them seamless, as long as your machine is capable of rendering the two worlds.

The shader pipeline has continued working on updating the games’ shader, and wrangling with the Mac version.

Design
This week has been mainly about worlds and colours. @lucadeltodecso has been working on the generation and regeneration of resources, so we’ve been assisting when there have been design questions. We are also building a process for generating the block tint colours, and the lighting settings for each world so when arriving on a new world it can have its own look and feel, but with a sensible ruleset which gives it a coherent look.

The other thing we’ve done is write the questions for the next survey, which we’re aiming to send out early next week.

GUI
There’s a lot of GUI in Boundless. How much GUI? This much GUI: 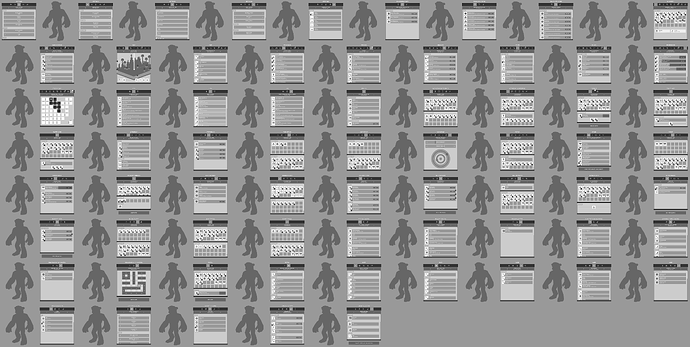 (Actually there’s more, but this is what we’ve done so far)

Right now we’re testing in wireframes (illustrated above) how our GUI system stands up against all the different gameplay system we’ll have in Boundless 1.0. Our goal was to build one set of widgets and elements that could pieced together in different ways drive all gameplay features that required an interface.

Work continues on implementing this system in-game with scaling and dynamic re-flowing of elements, we’ll have more to show next week (and maybe even some gifs).

Art
We’ve shared some concept development for the Protectors, Mystery Box, and Guild Control. Let us know what you think.

Next is the Beacon Plotter which the player uses when placing Beacons. The default item that you hold at the start of the game. Thematically we’ve chosen blueprints to show that your character is measuring and constructing the Beacon.

This week has all been about the character race exploration. We’re concepting a wide range of designs that are consistent with our Boundless lore.

For production reasons we have chosen not to render a player’s hands in 1st person so we have chosen two new items as a replacement of an empty hand. We’re calling it the totem - a subtly decorated stick in the right hand and an Oort cube light source in the left. The player can shake the Oort cube to light it up for a short period to help navigate if needed.

We’re fully into the Cuttletrunk animation exploring how this tentacled creature moves through the world. Here’s a sneak peek: 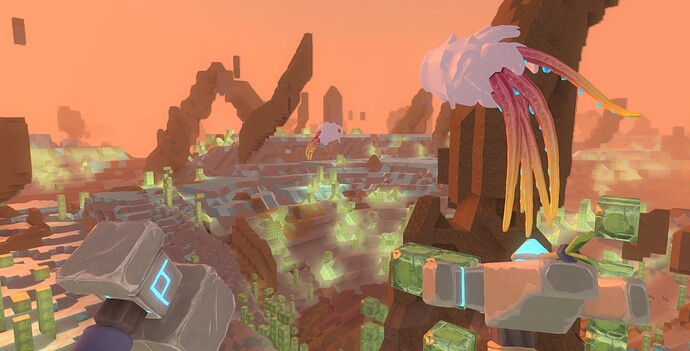 not to cause panic. but the first thing that struck me was “buy premium status”… i have rarely ever seen this done right. So you might want to address that before the major storm comes

secondly the “create citizen”. since you are already on a character and that they arent citizens. does that mean you can create NPC’s for your guild towns?

I always wanted to own my own asteroid!

not to cause panic. but the first thing that struck me was “buy premium status”… i have rarely ever seen this done right. So you might want to address that before the major storm comes

This isn’t really the way I wanted to start sharing details about maintaining longevity of Boundless after release, beyond the concepts that we’ve already shared, for example Private Worlds. But I also don’t want to take down an image that contains some seeds of ideas we’ve explored. We have a range of ideas that we plan to share with the community for feedback and input, and once they’re ready we’ll definitely share them. However, these concepts also contain pure placeholder content - some will be close to final content, some verge on “Lorem ipsum dolor sit amet, consectetur adipiscing elit, sed do eiusmod tempor incididunt ut labore et dolore magna aliqua.” (Placeholder details.)

So there’s nothing to hide, but simultaneously, scrutinising this images doesn’t lead to facts - only ideas and work-in-progress GUI designs with placeholder content.

We care about Boundless and our community. We don’t plan to bork it up, rather maintain it and help it grow.

Fair enough. Just wanted to point it out because i KNEW someone would find it eventually. better to be prepared than to get it thrown right in your face in an uproar (which has happened a few times)

secondly the “create citizen”. since you are already on a character and that they arent citizens. does that mean you can create NPC’s for your guild towns?

If you look at the last “Create a Citizen” screen… it shows a button with “Complete Citizen and join Boundless”, so this looks like it’s related to the initial character creation screens that you would go through before playing.

Damn. No harem simulator for me then QQ

No - it’s totally cool. You were 100% right. And I’m not sure how well my response will (pre?)defuse this obviously contention area. But it’s a discussion we need to have soon. Because the servers don’t pay for themselves.

Because the servers don’t pay for themselves.

And, probably, you’d prever to not starve

Thanks for the update! Added the art to the collection.

Cant wait for the Funky world 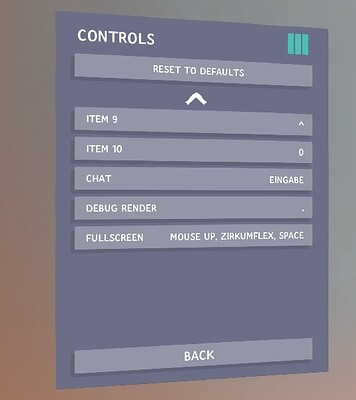 i can setup more as 1 function to a key without any warning that the key is already in use, normaly a message should popup and say the “key is still in use do you want assign the key a second time” o something like this.
and it should give a option to delete a keybind, maybe a small red x behind the keybind.

more i cant test atm because mouse move = changing window mode, and if i press the reset, nothing happen.

I am going to buy a ps4 later this year so i can play B< and i noticed that you mentioned that the portals will be seamless as long as your machine is capable of rendering the two worlds. I’m thinking all PS4s are made alike except that there is a new PS (i think it’s called PSNeo) coming out this fall. Does this mean that B< is being designed for the new PS4, because if it is I’ll just wait till later this year to buy that one instead.

pretty sure that all games are supposed to run on both the new and current model. Else sony would anger their users quite a lot.

I woud wait and see anyway though. As sony is waiting out for microsoft announcement about the new xbox one before they make any anouncements themselves.

portals will be seamless as long as your machine is capable of rendering the two worlds. I’m thinking all PS4s are made alike except that there is a new PS (i think it’s called PSNeo) coming out this fall.

I would be very surprised if the current PS4 cannot handle that; you’re probably fine w/ either model

Great work guys, awesome concepts. Got realllllyyyy tingly seeing the cuttletrunks. I can’t wait to see them bc i’m starting to get bored with the 2 you have right now.

If you’re unable to reset to the default controls then open the Boundless folder and then go into the user_settings folder. Click on the folder with your username and delete the controls-game.json folder. If you do this when the game is currently running then you will have to quit the game and load it again for the changes to take effect. You should then have default controls once more.

reinstall had the same effect ^^ i know this way. But its a bug and a missed option from me thats the main reason why i post it.

normal it give a key to abort a action, normal you can abort changing keybind with “esc” and it should be possible that a optioon has no keybind and that i can delete a single keybind, me as example want delete only the fullscreen option. i will no keybind for this.